Who is Mitt Romney? 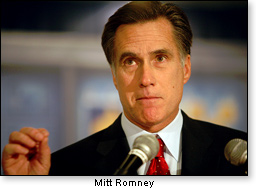 As the Republican establishment redoubles its efforts to anoint Mitt Romney the GOP presidential nominee (an outcome likely to ensure a second term for Barack Obama), the need to understand Mitt Romney increases.

What makes Mitt the kind of person he is — ruthlessly opportunistic, dishonest, insincere, willing to say anything for advantage, lacking in conscience, preoccupied with appearance, etc., on the one hand, yet squeaky clean, family-oriented, disciplined, boring, and predictable, on the other?

My new e-book, A Mormon Story, sheds light on the culture that produced Mitt Romney.

The book reveals a value system that ultimately has no absolutes, other than the need to conform to deep-seated, highly-controlling authoritarianism that pervades LDS culture.

That culture emphasizes a Mormon tradition known as "eternal progression" — undoctrinal spiritual evolution in which even God is changing. It also emphasizes the notion that the latest words of governing church leaders trump the Word of God found in the scriptures (including LDS scripture). As a result, Mormons have little incentive to inform themselves about what the scriptures call the "doctrine of Christ" (since they consider that doctrine subject to change); or to rely directly on God to know His will in applying that doctrine to their lives; or to sacrifice their security, comfort, or needs to do what is right, above all else.

In such a system, truth is relative, LDS leaders become the only reliable authority, and individual members are subservient.

Outwardly, as is well known, Mormons appear upright — but that is due largely to intense pressure to conform to the norms of Mormon society, and to uphold the Mormon church's nurtured image of conventionality. Inwardly, Mormons are less independently moral, principled, and informed than they may seem (something LDS scripture quotes God Himself as saying about them). They are trained to be dependent on church authorities to tell them what to think and do, in ways non-Mormons would have difficulty relating to. They behave much like a "cult" — one centered in obedience to powerful, dictatorial leaders.*

As a culture, Mormons therefore tend to lack moral courage — of the sort that would enable them to rise above such social pressure and truly lead out in solving the problems and paradoxes of real life. They are inclined to exemplify not firm leadership, but timidity masquerading as normalcy.

Watch Mitt in the debates. There's fear behind his practiced façade.

Sound intriguing? You bet (as Mormons would say). To read A Mormon Story, click here.

It's time for the culture of Mormonism — its relativistic, authoritarian values and traditions — to receive the kind of scrutiny often reserved for controversial elements of LDS doctrine. Americans deserve to know.

*To be fair, I should stress that my characterization of "Mormons" is just broad enough to create a clear picture of the traditions, values, and tendencies that do — in fact — permeate Mormon culture. I don't mean to imply there aren't exceptions among sincere LDS people. Indeed, I counted myself as an exception — before I was excommunicated for "disobeying" church leaders who illegally demanded I abandon my political livelihood. I know several LDS members who have fundamental integrity, and who therefore struggle with the undoctinal demands and contradictions placed on them by LDS culture.

A close look at Mitt's Mormonism

What God says about Mormons

Highlights of A Mormon Story

Background about A Mormon Story