June 25, 2018
On – ahem – respect for opposing views — In what appear to be his waning days, John McCain is preparing to leave a legacy of settling scores. Some others are tearing open the wraps that until now have kept some deeds of the senator and/or his aides hidden from public view. 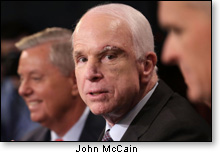 Judicial Watch, for example, has unveiled internal IRS documents showing that a top aide of the Arizona lawmaker was up to his neck in urging the IRS to lower the boom on conservative tax-exempt groups. McCain committee staff director Henry Kerner urged IRS officials, including the Fifth
Amendment-pleading Lois Lerner, to audit so many conservative groups that "it becomes financially ruinous" – i.e., keep harassing non-profit groups "until they are unable to continue operating."

Outrageous? Of course. Surprising? Not at all. Leftists have long prioritized their never-ending campaign to shut up anyone who disagrees with them.


The cheap shot — Here's how Adam Bernstein of the Washington Post, the home newspaper for the column of Charles Krauthammer, reported the recent passing of the journalist icon: "Charles Krauthammer, a Pulitzer-Prize winner, Washington columnist and intellectual provocateur who championed the muscular foreign policy of neoconservatism that helped lay the groundwork for the 2003 U.S.-led invasion of Iraq, died June 21 at 68."

Supporters of the late Krauthammer cried foul, one of them saying on the web that "Drilling Krauthammer's decades of respected insight on national politics [in his writings and commentaries on Fox News] into a cheap shot about the Bush-led war in Iraq is classless at best and terribly dishonest at worst."


What the law says — Aside from the restaurateur who allowed his establishment to be converted from a dining experience into a near riot when seemingly deranged mobs chased Homeland Security Secretary Kirstjen Nielsen away from her dining, here is perspective on the overriding issue of illegal immigration – separation of families – as summed up by White House Deputy Press Secretary Hogan Gidley: "Democrats are saying you can't deport them, you can't detain them, you can't prosecute them," he said on Fox News. "The only thing you can do, per a Democrat, is to release them into the interior without any ramification for what they've done by breaking our laws. It's absolutely incredible."

“There [is] only one of two things that can happen when [immigrants] come here [illegally],” Gidley told Fox & Friends. “You either have to release them into the Interior of the United States as a family unit, or you have to separate the families. That’s what the law says.” 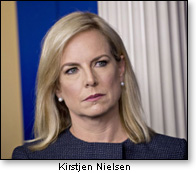 This column's perspective on all the screaming, vile threats, and derangement on this "family separation" issue: It just happens that all the shouting is a way to distract public attention from the Inspector General's report issued the same week that called out lawbreaking by FBI upper echelons and former Obama administration officials that could lead to indictments and jail time – a political embarrassment with the mid-term elections coming up. We don't know for a fact that is the motive for all the fake anger...but it is a convenient distraction. At least, that's what this column is "just sayin'."