'I was among those arrested at Notre Dame a few weeks ago when the university decided to honor President Obama with a law degree  even though he is the biggest advocate of child-killing to ever hold that position. A number of you had asked about what was happening, so I thought I would send out an update.

'I returned yesterday from South Bend where I entered my plea, which was, for a number of different reasons, 'not guilty.' We are being very well represented by a group out of Washington D.C. and a local lawyer right in South Bend. There were about 40 people in court with me. Norma McCorvey was in court yesterday. Alan Keyes was in my group last week, but I don't know when some of the other big-name people, like Father Weslin, are set to go back.

'One of the lawyers representing us tried to meet with President Jenkins of Notre Dame. President Jenkins refused to talk with our lawyer, saying only that the issue is behind him and it is now in the hands of the criminal courts. I will be returning for my trial, but that is a few months away. So I have time before having to go back again, after going there twice in three weeks. I feel very good about what is happening now, and I'm not worried in the least bit. It was definitely worth it.

'The liberal media are taking every chance they can now to say that pro-lifers are extremists, radicals and life-threatening. But just know that the South Bend/Notre Dame police found the pro-lifers to be so peaceful that when they arrested us, instead of using steel handcuffs, they found a shoelace to be effective enough.' [Check out the photos at the end of this column.]

It's utterly disgraceful that Father Jenkins has apparently refused to ask the civil authorities to drop the trespassing charges against the pro-life protesters. There simply is nothing charitable that can be said about him at this point.

On the same topic, a friend recently sent me a link to an excellent post on The Catholic Guys blog (check it out), which I reprint below in its entirety:

'In October 1964, Barry Goldwater's running mate, Congressman William E. Miller of New York, visited Notre Dame. Miller, the first Notre Dame graduate (class of 1935) to run for national office on a major party ticket, attended a home football game, virtually next to university president Rev. Theodore M. Hesburgh, C.S.C. Apart from a perfunctory handshake, Father Hesburgh showed little interest in his guest. In fact, Congressman Miller had not been invited by the university, but by a friend and fellow alumnus.

'After the game, Miller was invited to speak on a platform (erected for an earlier rock band performance) in front of Sorin Hall. Father Hesburgh's introduced Miller to a crowd of a few hundred along these lines: 'Men of Notre Dame (there were no women in those days), you should always listen to people with respect, even when you do not agree with them. I give you Congressman William Miller.'

'Contrast that chilly reception  of an orthodox, pro-life Catholic Notre Dame graduate  to the recent jubilation surrounding the arrival of the proudly pro-abortion leader of the international culture of death who was granted an honorary degree by Notre Dame at its commencement on May 17. The look on the face of university president John Jenkins, C.S.C. as he hugged President Barack Obama was totally bereft of the dark and distant disapproval evident in Father Hesburgh's stern gaze of some 45 years before.

'Father Jenkins was simply giddy with exultation. His introduction sounded like a cause for canonization. Jenkins was impressed, he insisted, that Obama had deigned to accept his invitation: 'Obama has come to Notre Dame, though he knows well that we are fully supportive of Church teaching on the sanctity of human life, and we oppose his policies on abortion and embryonic stem cell research. Others might have avoided this venue for that reason. But President Obama is not someone who stops talking to those who differ with him.'

'Sorry, Father John. Obama is not even someone who stops to talk to those who differ with him. Thousands of peaceful pro-life demonstrators lined every major route to campus that day, and Obama was forced to enter the campus by a nondescript back road, with police cars blocking every residential cross street for over a mile. No way would this fearless lover of conversation even have to see the demonstrators 'who differ with him.' Nor did he see the thousands praying at the other end of campus, or the dozens of graduates who held their own (very crowded) pro-life graduation ceremonies at the Grotto.

'Obama didn't have to worry inside the hall, either. Not one official discouraging word was heard. The message? Even if Obama doesn't stop the killing, Notre Dame will still cheer him on. Meanwhile, Father Jenkins, knowing his place, never mentioned Obama's support of abortion, partial-birth abortion, infanticide, contraception, worldwide abortion-on-demand, or any other of those pesky little issues that might make 'The One' feel unwelcome. No, we save the cold shoulder for the likes of our own pro-life graduates, like Bill Miller.

'As usual, Obama played the crowd like a very pliant fiddle. With a keen eye for the ideological fault line, he zeroed in on a leader of a bygone Catholic era, Chicago Archbishop Joseph Cardinal Bernardin. Now there was Obama's kind of Catholic! 'Heterodox to the core, Bernardin was 'congenial and gentle in his persuasion'  but, Barack, he didn't seem to persuade you. In fact, didn't Bernardin preside over the most disastrous period in the history of the American Catholic Church? You know, when homosexual abuse prospered under the guise of 'the spirit of Vatican II,' when Bernardin's bishops covered up for criminals, defied Pope Paul VI, and allowed their cohorts to defile the liturgy? And where were Bernardin's brigade when their priests deep-sixed Humanae Vitae? Were they all too busy partying with his friend next door, Archbishop Weakland?

'Nor did Obama forget Father Hesburgh, who in the 1960s decided that to be a 'great university,' Notre Dame had to shed its parochial Catholic character so it could qualify for major funding from the federal government. Great Job, Father Ted! Today, Notre Dame prospers without its Catholic character, but it would collapse without that generous government funding, which public records indicate now runs around $57 million dollars a year. This is the Notre Dame Obama praises: the one that depends not on Catholic truth, but on federal money, for its very survival. Obama's got Notre Dame right where he wants it.

'Not since John F. Kennedy traded his faith for political gain has an American president so brazenly manipulated the Catholic Church. Meanwhile, Father Jenkins is pleased to play Obama's lapdog, confident that the money and prestige will keep on flowing. He knows where his bread is buttered  and it's not the Bread of Life.

'Obama's Notre Dame marks an important 'coming out' of what we might come to call the National Patriotic American Catholic Church (NPACC). NPACC is modeled on the official 'Catholic' church in communist China, which receives government support while the underground Catholic Church that is loyal to Rome is mercilessly persecuted. NPACC and the USCCB ardently support the entire left-wing Democrat agenda, while soft-pedaling abortion and never complaining about taxpayer-funded contraception. Through Notre Dame and various other 'Catholic' universities and institutions, NPACC receives billions of taxpayer dollars annually. Even those bishops who condemned Obama's appearance at Notre Dame have a hard time dealing with Obama's pro-abortion Catholic colleagues  they too realize how much money is at stake. But Notre Dame might be a turning point. NPACC has been around for decades, but has enjoyed a relatively 'peaceful coexistence' with the Church of Rome for most of that time. In future years, Obama's Notre Dame visit might well be seen as marking the end of that era.

'Brushing abortion aside, Father Jenkins applauded Obama's leadership on other issues that apparently unite him with NPACC Catholics. Such as? 'Extending health care coverage ... improving education... promoting renewable energy ... [the] fight against poverty, to reform immigration.' In other words, more left-wing USCCB mush to placate the Democrats who happen to be in charge of handing out all that government money.

And what about the graduates? For Jenkins, what is the greatest challenge confronting the Class of 2009? Is it living the Gospel in a hostile world? Preaching Christ Crucified to itching ears? Saving souls? Repentance and sacrifice? Prayer and fasting? Selfless service to the cause of truth? Teaching the fullness of the Faith in the face of mockery and contempt?

'Sorry, folks  none of the above. No, Father Jenkins told the crowd that 'easing the hateful divisions between human beings is the supreme challenge of this age.'

The Oxford English Dictionary defines 'to ease' thus: 'to render more comfortable, to relieve from pain.' Apparently, the task of Notre Dame-NPACC Catholics is to make our relationship with our sworn enemies  with abortionists, for instance  more 'comfortable.' Hence, Father Jenkins's goal was to make Obama as comfortable as possible at Notre Dame. Well, the unborn are human beings too. What about relieving their pain? Or healing the 'hateful division' between them and their abortionist? In the end, Father Jenkins knows that a university cannot serve two masters. As Donoso Cortes puts it, 'Liberalism can survive only in that brief moment that man decides, 'Christ  or Barabbas!''


I couldn't pass up this item:

Well, she does have an appropriate last name... 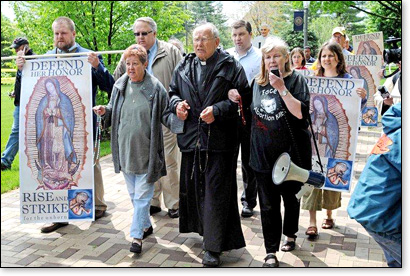 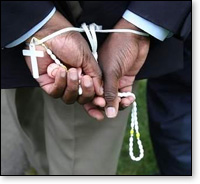