October 22, 2009
Yet another bizarre case in the Windy City.

'A Chicago pastor was found in his Southwest Side home, stabbed more than twenty times and it was ruled a suicide.

'The I-Team has been looking into this two-week-old case that has stunned those who knew the priest. The death of Fr. Waclaw [S. Jamroz] didn't receive much attention outside his parish near Midway Airport. 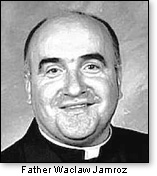 'A press release from the archdiocese reported that he died of 'self-inflicted injuries.' But after the I-Team learned that those injuries included nearly two-dozen knife wounds, we began investigating a mystery in the rectory.

'Fr. Waclaw hosted religious shows on polish TV and radio. He taped one show three days before he was found dead....

'The priest's heart was at Our Lady of the Snows parish north of Midway Airport where black bunting signals that something terrible happened. It was Thursday, October 8. Morning mass was set to start at 8:15 followed by a funeral at 9, both events on Waclaw's calendar. But when the normally punctual pastor didn't show up, police were called to the rectory across the street.

'He was found on a bathroom floor, multiple stab wounds in his stomach and other cuts on his wrists.

''There is no question this was a slow, very violent death,' said Steve Patterson, Cook County Sheriff's Department. There was no suicide note. The priests' cash and jewelry were not taken.

'On Wednesday night, county police were still questioning some people who had dealings with Fr. Waclaw immediately prior to his death and the case remains open. But sources familiar with the investigation say because there was no trail of blood from the messy scene, because the priest was found in a locked bathroom, and because some acquaintances reported his unusual behavior of late. It had to have been a suicide.

'At the pastor's wake, hundreds of parishioners lined up to pay their respects. The finding of suicide met with disbelief by those who said Fr. Waclaw believed only God could take a life....

'The pastor had some personal concerns. He was recently accused of civil racketeering in a lawsuit filed by the husband of a parishioner in a messy divorce.

'According to the suit, Fr. Waclaw raised $577,000 from churchgoers to help the woman pay legal bills. Then the priest testified against an attorney in the case at a state disciplinary hearing-describing 'threats' by the lawyer. Fr. Waclaw said the attorney told him to steal money from the church and when he refused was offered $5,000 cash to forget about it. The lawyer's license was suspended by the state on September 28.

'Friends say if Fr. Waclaw had problems, he never showed them....

'Cardinal George officiated the funeral mass last week and a spokesman for the archdiocese says Catholic church [sic] officials have no information that his death was anything but a suicide. The priest's body is being returned to his native Poland for burial.'

Interestingly, Father Waclaw Jamroz' stabbing death  ruled a suicide  is similar to that of Catholic choir director and professor Francis E. Pellegrini, who was murdered in 1984. That case, which I covered most recently in a Feb. 7, 2009 column, remains unsolved.

I highly doubt there's any connection between the two cases, considering the Pellegrini homicide occurred 25 years ago. And, of course, Father Jamroz' death, unlike that of Pellegrini, has been ruled a suicide. Still, it's rather eerie that both men died of multiple stab wounds under mysterious circumstances, don't you think?

Staying on the subject of Chicago...

'Ald. Edward Burke [is] one of 30 Chicago aldermen the records show sent job requests to Blagojevich's office. Burke is listed as sponsoring Kathleen McChesney, former chief of Chicago's FBI office, for an undisclosed opening in an Illinois Department of Corrections post in January 2005  a post she ultimately didn't get. In an interview, McChesney said she had no idea why she was on the list and that she never sought a job with the state. Burke didn't respond to a request for comment.

'The name Kathleen McChesney ring a bell? It should. She was the U.S. bishops' first appointee, in November 2002, as director of their Office of Child and Youth Protection. Alderman Burke's plug occurred just one month before she left the post.

'Anne Burke, who served as vice-chair of the USCCB's National Review Board on sexual abuse from 2002, and who became chair in 2003, turns out to be the wife of the same Alderman Burke who was so accommodating to Dr. McChesney.

'And how did it come about that McChesney was chosen to direct the OCYP in the first place? A puff-piece in the St Anthony Messenger (2003) says 'she was recruited by a member of the new National Review Board, but gently declines offering further details.'

'Now if you've been paying attention, you'll remember that McChesney's successor as executive director of the Office of Child and Youth Protection was Teresa Kettelkamp, who also boasted Illinois public sector connections. She had been a colonel in the Illinois State Police before her appointment.

'Is there reason to think Burke or McChesney or Kettelkamp have been derelict in their duties as set out by the Bishops' Charter for the Protection of Children? None that I'm aware of. But, as Phil Lawler has repeatedly pointed out in his writings on The Scandal, that Charter sidelined the clergyman perps, but signally failed to penalize those bishops who'd allowed the perps to abuse children in the first place. In other words: the Chicago girls did their jobs, and the bishops who hired them kept theirs.