November 17, 2009
This past weekend, I attended a short seminar on the ministry of sidewalk counseling. The seminar was organized by the Chicago-based Pro-Life Action League (a former employer of mine, incidentally).

The following is a slightly-edited portion of the information given to the seminar's attendees. It describes much of what is involved in this important ministry. Keep in mind that the League is in no way denigrating other types of peaceful pro-life activism. Not everyone is called or has the skill (including yours truly) to participate in sidewalk counseling; and other types of activism and educational endeavors are, of course, needed.

Below the text is an image of a pamphlet that details the malpractice lawsuits against a particular abortion facility  in this case, Planned Parenthood of Chicago. The pamphlet is one piece of information that can be given to abortion-bound women entering the facility.

'Sidewalk counseling is a method of saving babies by talking to their mothers and those who accompany them in front of the abortion clinic. It is probably the single most valuable activity that a pro-life person can engage in. When pro-lifers counsel in front of an abortion clinic, they are coming between the woman and the doctor, between the baby who is scheduled to be killed and the doctor who would do the killing.

'Counseling goes to the very heart of the abortion problem. The problem of abortion is a problem of killing babies. They are killed in abortion clinics or hospitals or doctors' offices, and pro-lifers go there to intercede for the baby's life. The aim of the Pro-Life Action League and other activist groups is to get more people out on the streets to stand between the killers and the victims.

'There is no one most effective way to do sidewalk counseling... The counselor has to know something about human nature and must be able to understand the crisis the pregnant woman is facing. The counselor must understand what has driven her to this unnatural solution to a problem pregnancy. The counselor must understand why the woman wants to bid rid or her baby. Surely the worst solution to any problem is to kill an innocent human being. Yet, that is the solution a woman chooses in having an abortion. Something drove her to that. Some people think it is such a difficult decision to make that once it is made, there is no way to turn back.

'But women can be turned back. Thousands of people are alive today because a sidewalk counselor or a crisis pregnancy counselor helped their mothers choose life. In Chicago, in one 30-day period, half a dozen sidewalk counselors at only a few clinics were able to stop 90 women from having abortions. Imagine if sidewalk counselors were present at every abortion clinic in America during every hour the clinics are open. This is our goal.

'An analogy that brings home the reality of abortion is this question: If someone came into your living room and grabbed your three-year-old and rushed out of the house, threw the child into his car and drove off, what would you do? Would you write a letter to the editor? Would you complain to your congressman? Would you demand better police protection in your neighborhood? No! You would rush out, jump into your car and pursue the kidnapper and rescue your child. If you saw him take the child into a building, you would go into that building. No one could keep you out. You would go where the child is and try to save him.

'That is what we do when we go to an abortion clinic. We believe in the full humanity of the unborn child so firmly that we put ourselves between the child and the abortionist. But we must be armed with knowledge and skill so that we will actually save the child. We have to save the child through our words, actions, a right attitude and prayer.

'Many of us go to the clinics simply to pray. That is very effective. For one thing, people in prayer present an impressive sight to people going in to kill their child. Prayer has its own special power and it is always essential.

'Some pro-lifers have a special calling and the skill to reach out and talk to the pregnant woman, the boyfriend, the parent, or friend who is accompanying the young girl. Increasingly we find that the pregnant woman herself has had a previous abortion. There are many obstacles to overcome.

'As a woman approaches the abortion clinic, there is little time for words. The counselor can politely ask the woman if she wants to talk. Some counselors will take 'no' for an answer and not pursue the matter. Others will continue their efforts and try to win the woman over by offering her literature that will provide her with important information.

'After many conversations with women who have had abortions, we recognize that by the time a woman arrives at the abortion clinic she has already mentally aborted her baby. She is more interested at that point in getting herself out of what she sees as an impossible situation. In Chicago, seasoned sidewalk counselors developed what we call the 'Chicago Method,' an approach grounded in the realization that women at an abortion clinic are more concerned about their own health and safety than they are with the baby's future.

'Yet there are many dangers inherent in the abortion procedure that women need to know about. And there are physical and psychological consequences following an abortion. To further emphasize the dangers, we research the malpractice lawsuits that have been filed against the abortion doctors and the clinics where they work. We publish summaries of the legal complaints and distribute these to clients approaching the clinic and to those who are accompanying her  those who should be concerned for her safety.

'Once the woman or her companion appears willing to talk with the sidewalk counselor, the subject of the baby can be discussed. We have discovered that often a young woman does not realize how well-developed the life inside her is at her stage of pregnancy. The clinic personnel may have told her that her baby is only tissue. They probably have lied to her to make her feel good about having the abortion and to make sure she goes ahead with her abortion. After all, the clinic has nothing to gain by revealing to the client how magnificent her unborn baby actually is. They might lose a customer.

'The pro-life counselor should have literature with photos of the unborn baby at various stages of development, along with a description of the baby's capabilities.... Sometimes all it takes to save a baby is to have someone there with the facts of fetal development and the facts about abortion and a willingness to approach the abortion-bound woman with these facts.

'The counselor should encourage the woman to talk about her situation in order to find out why she thinks abortion will solve her problem. Sometimes the counselor can appeal to the boyfriend or husband to step up and protect the woman and his baby. Sometimes a friend who has come with the woman has been trying to talk her out of an abortion and can be the sidewalk counselor's ally in the effort to turn her from the abortion clinic.

'It is extremely helpful if there is a pregnancy assistance center nearby where a woman can be referred or, better yet, taken to by the sidewalk counselor. These centers generally offer free tests to confirm the pregnancy. We have learned that the abortion clinics are not always truthful about the results of a pregnancy test and will do a procedure whether the woman is actually pregnant or not. The sidewalk counselor should encourage the woman to get another test at the nonprofit pregnancy help center before she makes a decision.

'Since crisis pregnancy centers are so crucial to the life-saving work of pro-life activists, the sidewalk counselor should establish a good relationship with the centers that are near the abortion clinic. They must know when the pregnancy center is open and what services it provides. It could be detrimental to your counseling efforts to promise services that cannot be provided. For example, you probably cannot promise that the pregnancy center will find a job for an unemployed single mother. But you can probably tell her that the center can provide her with maternity clothes, a baby crib, a car seat and such amenities.

'If the abortion-bound woman is not willing to go to a pregnancy-help center but is willing to continue talking with the sidewalk counselor, it is best to move away from the abortion clinic entrance. If there is a coffee shop or diner nearby, invite her to go there with you and talk about her situation.

'Once the sidewalk counselor has established a relationship with the pregnant woman they may exchange phone numbers. The mere fact that the counselor has shown a willingness to make herself available and be supportive may be enough to help the woman decide to choose life for her baby.

'The most important attribute of the sidewalk counselor is true compassion for the pregnant mother and her baby. The counselor must be able to put herself in the woman's place and be a good listener. Often the pregnant woman will discover the solution simply by being able to talk out her concerns with a counselor who will listen without judging her.

'The sidewalk counselor is a person with a strong sense of morality and an understanding of the long-term effects of a decision to have an abortion. The decision to abort stops a life that would eventually involve thousands of other lives. A woman who ends a pregnancy ends generations. The 'counselors' in an abortion clinic are paid to convince the woman to choose abortion. They have no concern for the woman's future, the plight of her baby, or the damage abortion does to society.

'Whenever a sidewalk counselor helps a woman reject abortion, the counselor celebrates a 'save.' But the counselor may have an impact on a woman even if she goes on into the clinic and it seems the baby is lost. Abortion clinic workers report to us that pregnant mothers often spend hours in a clinic and end up changing their minds because of the presence of a sidewalk counselor. The counselor may also influence the companions of the pregnant woman. Reaching out in love can have only positive results no matter what the outcome of the particular situation.' 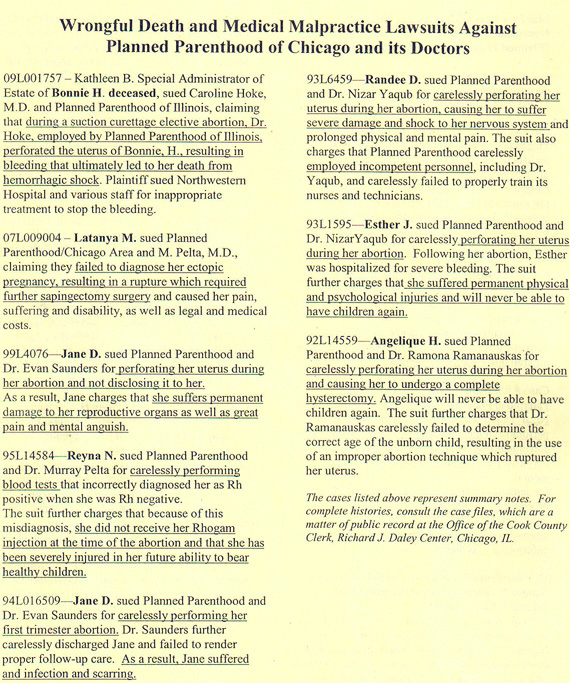