December 31, 2009
The Thomas More Society had quite a productive decade. Founded in 1997, the Chicago-based pro-life law firm has been working quietly but diligently to defend those of us who oppose the pervasive culture of death. 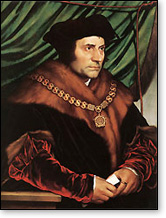 The firm's most notable case is NOW v. Scheidler, which technically began over two decades ago. From the firm's Web site:

'In 1986, the National Organization for Women and two abortion clinics filed a complaint in Federal Court alleging violations of the Sherman-Clayton anti-trust laws against Joseph Scheidler, the Pro-Life Action League and several other defendants. Thus began the landmark NOW v. Scheidler case, which ultimately was won by the pro-life defendants.

'The case has been to the Supreme Court three times. In 1994, a 9-0 decision allowed the case to go forward to trial as a civil RICO action. In 2003, the Supreme Court ruled 8-1 to overturn the District Court jury's 1998 guilty finding against Scheidler and his co-defendants. And in 2006, the Supreme Court unanimously ruled again in favor of Scheidler, putting to rest an effort by NOW to keep the case alive in the Seventh Circuit. In May 2007, over a year after the Supreme Court ruling, District Judge David Coar signed the final judgment, reversing his 1999 Judgment and vacating the nationwide injunction in effect since July 16, 1999....'

Even in 2009, the Thomas More Society accomplished much.

From the firm's recent fundraising letter:

'We've been blessed in having been able to fight so many important cases over this last year. Here is a short 'laundry list' that highlights some of the many battles that we've fought, so many of which culminated in victories for pro-lifers:

'On top of all these engagements, we fought and won many other battles. Some others we lost, as when the U.S. Supreme Court turned down our appeal to win the right to obtain 'choose life' specialty license plates for Illinois pro-lifers. Even The New York Times had predicted that the Court would hear our appeal. But the odds  120 to 1 against us  proved too great. We live to fight another day, and we have new strategies for fighting that battle and winning it next time around.'

Bravo to the Thomas More Society  and bravo to all the dedicated pro-lifers here in the U.S. and around the world! Happy New Year, dear readers. Please pray for my loved ones and me.