In the January-February 2010 issue of the New Oxford Review, in an article titled "Is It Time to Dump the Term 'Pro-life'?", Leo Hunt writes (excerpted; for the full article, click here):

'The time is ripe for defenders of preborn human children to face a nearly unbearable fact: The pro-life movement is going to fail miserably. Is it due to the relentless propaganda of the abortion lobby and the embryonic-experimentation lobby? The appalling degeneracy in education, which renders most minds weak enough to swallow it? The stranglehold of a contraceptive and anti-child culture? Evil politicians? Well yes, those things too. But the surest guarantor of failure is the weakness and lack of principle endemic to the pro-life movement itself. 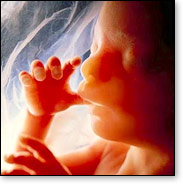 'In her incisive article in the February 2009 issue of the NOR, seasoned activist Judie Brown, president of American Life League, called for principled political action that focuses on the personhood of the preborn human child, rejecting any and all provisions for the murder thereof. She wisely tempered the recent optimism about a supposedly growing 'pro-life' public by pointing out that nearly all Americans tolerate abortion in some cases. To which I would add that a decidedly unimpressive minority seriously opposes potentially abortifacient methods of 'contraception,' in vitro fertilization, and experimentation that kills human embryos.

'And yet, as Brown anticipated, her call is viewed as extreme or unrealistic by most of the pro-life movement. In the political sphere, most pro-lifers support not politicians who unequivocally champion the personhood of human children, but those who tolerate killing them in fewer cases. We support exception-laden legislation. We throw our energy into half-hearted causes such as conscience clauses or parental notification or mandatory waiting periods, and we allow ourselves to become accomplices in the relativization and trivialization of abortion by describing such measures as 'reasonable' and 'common-sense.' We have come to believe that the abolition of all child-killing is somehow not reasonable!

'But what is worse is that most pro-lifers really do support abortion in cases of rape, or if the child has been diagnosed with a disability, or to safeguard the life or even mere health of the mother. To remain pro-child in these cases is to be branded an extremist. Nearly everyone would rightly condemn a man for running out of a burning building and leaving his wife or child to perish. Yet, to condemn a woman for premeditating the murder of her child to save her own hide is considered insensitive at best, and more often insanely hateful. This truly signals the crippling weight of injustice that feminism has foisted upon our society.

'But laments will only take us so far, and we must seriously ask how it has come to this. Could part of the problem be with the very phrase 'pro-life'?

'The original terms of the debate were simple and honest: pro-abortion vs. anti-abortion. Then the abortion lobby coined that hip euphemism, 'pro-choice.' Casting about for a positive-sounding designation of their own, opponents of legal child-murder christened themselves 'pro-life.' This was a defensive move, and it heralded a veritable parade of further and increasingly silly defensive moves: Eventually, anyone who opposes the extermination of preborn human babies must also be unconditionally anti-war and a death-penalty abolitionist; must not own a gun or wear fur; must be deeply concerned about the rain forests and dismiss all action films as ghastly. By making a decision based on rhetoric and image rather than clearly thought-out principle, the movement doomed its adherents to being judged based on how well they embody the rhetorical term. This move unwittingly obscured the core issue of every preborn human child's inalienable personhood in the fog of a generalized abstraction: 'life'.....

'The Personhood Movement would jettison the term 'pro-life.' If we must have some pithy moniker, then pro-personhood, pro-human child, and pro-child are credible options. Opponents of the death penalty or any given war would have a moral obligation to keep those causes separate from that of recognizing the personhood of preborn children. The Personhood Movement would embody this obligation by focusing solely on human personhood from conception to birth. It would drop stale slogans like 'respect life from conception to natural death,' unless modified to 'respect innocent human lives from conception to natural death'.....'

I asked Judie Brown to comment on the New Oxford Review article. She wrote:

'Let me be clear that the majority of mainline, politically motivated so-called national pro-life organizations not only do not endorse or work for human personhood but publicly denounce it, i.e. National Right to Life Committee and the USCCB. Other groups like Priests for Life simply say nothing at all. The difference between the mainline politically motivated pro-life movement and the pro-personhood movement is that we struggle to support human rights for every human being from his or her biological beginning until his death. As such we actively expose and oppose all incremental legislative proposals that include permission to abort in cases of rape, incest, life or health of the mother, and fetal deformity; we oppose all chemical and device-instigated abortion and we oppose IVF and other such practices because they are intrinsically evil and result in killing human persons.

'We never use the word 'fertilization' because it leaves out all those people who are created by asexual methods or who are created in that way in the natural process such as monozygotic twins. We support human rights for all persons.

Meanwhile, American Life League and the other pro-life groups that comprise the Reform CCHD Now coalition have revealed additional information that, once again, casts a cloud over the USCCB bureaucracy.

'More startling evidence has been unearthed about the Catholic Campaign for Human development that shows a disturbing pattern of cooperation between the U.S. Conference of Catholic Bishops and groups that advocate abortion and same-sex marriage.

'Two reports, released yesterday by the American Life League (ALL) and Bellarmine Veritas Ministry (BVM), reveal that the Center for Community Change (CCC), an organization recommended for support by the USCCB, has consistently taken positions opposed to the bishops' teachings on abortion, marriage, contraception, and sexuality.... 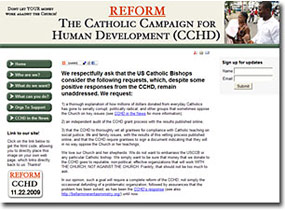 'This is the second round of incriminating evidence presented by ALL and BVM about the CCC. Three months ago, they issued a press release and supporting research regarding 31 CHDD grantees with a relationship to CCC  all of which was ignored by the USCCB.

'As ALL's Michael Hichborn points out, these reports have 'revealed no less than fifty organizations (one fifth of all CCHD grantees from 2009) that are, in some capacity, engaged in pro-abortion or pro-homosexual causes (www.all.org/cchd). The sad thing, however, is that these recent revelations manifest a pattern of cooperation stretching back for decades.'

These latest findings make it impossible for the USCCB not to sever its ties with the CCC. However, the situation is made more difficult by the news that John Carr  who oversees the CCHD as the USCCB's Executive Director of the Department of Justice, Peace, and Human Development  served on the CCC board from 1999 to 2006 and on its executive committee from 1999 to 2001. Carr was hired by the USCCB in 1987, but his involvement with the CCC goes back to 1983....'