Matt C. Abbott
Why I'm not jumping on the Palin bandwagon

February 21, 2010
I know Sarah Palin is popular among many conservatives, and, all things considered, I can understand why. She's attractive, smart (despite how the liberals and the mainstream media portray her) and seems to share the values conservatives hold dear. Oh...she's feisty, too.

But I'm still not sold. Maybe enthusiastic is the better word.

Yes, I suppose she has a chance to defeat Obama in 2012, should she choose to run. And should it end up being a close race  that's a big "if" at this point  I'd likely vote for her. 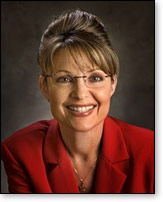 What bothers me about Palin: Yes, she opposes legalized abortion and embryonic stem cell research, but I'm troubled by a statement she made in 2006 regarding the use of contraception (I can just see the rolling eyes of conservatives who regard this topic as myopic  or worse).

She responded: "No, I don't think that it includes something that is relatively benign. Explicit means explicit. No, I am pro-contraception, and I think kids who may not hear about it at home should hear about it in other avenues. So I'm not anti-contraception. But yeah, abstinence is another alternative that should be discussed with kids. I don't have a problem with that. That doesn't scare me, so it's something that I would support also." (Source)

In addition to being contrary to the natural law, condoms are not very reliable. Brian Clowes, Ph.D., director of research for Human Life International, wrote an essay on the subject. A few highlights from Dr. Clowes' essay:

And, of course, despite what the pro-aborts claim, more contraception always leads to more abortions! As Dr. Clowes writes in The Facts of Life:

'Since the 1930s, pro-abortion leaders have admitted that an increase in contraceptive availability inevitably leads to an increase in promiscuity and therefore abortions....

'The thinking behind this phenomenon at the individual level is quite straightforward. Once a couple starts using contraception, they make lifestyle changes and commitments that do not allow room for children. When contraception fails and they become pregnant, their 'life plan' wins out over their preborn children. Additionally, they have been conditioned to see their preborn child not as a gift from God, but as a 'contraceptive failure' or a 'mistake.' Since the contraceptive method has failed them, they feel cheated and therefore 'entitled' to an abortion as a form of compensation....'

'...As shown previously, countless intimate legal, medical and practical connections exist between contraception and abortion. But all of these links pale in comparison to the most important connection of all: The fact that the very same belief system and psychology that accepts contraception also readily accepts abortion. Most people (including most Christians) use contraception for one or more of several reasons: They can't afford a baby, they have problems with their relationships, they want to avoid single parenthood, they aren't ready for the responsibility, they have all the children they want and they are concerned about how a child (or another child) would change their lives.

'These are exactly the same reasons women use to justify having abortions...Underlying them all is the fundamental denial of God's plan for children in our lives. People today want to 'plan' their families. But who can better plan a family than God?

'Why does a couple contracept? Because they don't want a child. Why don't they want a child? Because they have made important plans for their lives. And when contraception fails, the resulting 'unplanned' child is seen as an intruder, one who will spoil the couple's carefully laid plans. And when a couple has denied God's plan for their lives once through contraception, it is so much easier to do it again through abortion.

'As Mother Teresa of Calcutta observed, 'In destroying the power of giving life, through contraception, a husband or wife is doing something to self. This turns the attention to self and so it destroys the gifts of love in him or her. In loving, the husband and wife must turn the attention to each other as happens in natural family planning, and not to self, as happens in contraception. Once that living love is destroyed by contraception, abortion follows very easily.''

Now, I realize that it will be a cold day in hell before we have a contraception-opposing candidate who has a realistic chance of winning the presidency. Heck, we're fortunate if we have a pro-life candidate who doesn't have rape and incest exceptions!

The sad fact is that pro-lifers who oppose legalized abortion and contraception are in the minority and probably will remain so, barring an act of God, until the end of time.

That's why I don't put my faith in, nor am I enthusiastic about, politics. It's almost always a case of voting for the "lesser evil." (Or, as Father Frank Pavone of Priests for Life puts it, "...in choosing to limit an evil, you are choosing a good.")

It's also why I'm not jumping on the Sarah Palin bandwagon.