Matt C. Abbott
'No Turning Back' for surfer-priest

February 23, 2010
Below is the Introduction to Father Donald Calloway's 2010 book No Turning Back: A Witness to Mercy  a book Peter Kreeft, Ph.D., calls "an amazing, captivating story, because The Divine Mercy is an amazing and captivating reality."

Prior to his conversion, Father Donald "was a high school dropout who had been kicked out of a foreign country, institutionalized twice and thrown in jail multiple times."

Many thanks to Father Donald, Marian Press and Brian O'Neel of CatholicWord.com for allowing me to reprint this material.

No Turning Back (Introduction) 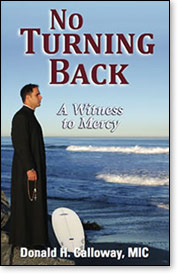 When I was a teenager, if someone had told me I would one day be a Roman Catholic priest writing a book about my life and telling the remarkable story of my conversion to people around the world  I would have said, "You're crazy ... ! I'm going to smoke a joint. Now get out of my face." Even today, it still amazes me that I'm a priest.

What you are about to read is the story of my conversion  what Jesus and Mary have done to my life, bringing me out of darkness and atheism to the fullness of truth in the One, Holy, Catholic, and Apostolic Church. And the conversion story is ongoing. Even today, I find myself in the midst of this mystery that God has called me into. In so many ways, I am not worthy. But by the grace of God  by His mercy  I continue to experience conversion every day.

Some may find the following story  my life story  to be almost unbelievable. After I give my conversion witness at conferences, it's not unheard of for someone to approach me and say, "I can't believe it. I think this is unbelievable." That's why whenever I do a speaking engagement, I always bring along a photograph of myself  a picture of what I looked like when I was in my late teens. Rest assured, I don't carry around an old photo because I'm an egomaniac. I do it so people can visualize what an animal I was before my conversion. I don't necessarily blame people for being skeptical. If I were in someone else's shoes, I would probably have doubts myself. How is this possible? Is this story true? Because these kinds of events only happen in the Bible.

But when these same skeptics see my picture, they usually find it to be pretty powerful. My eyes are vacant and hollow, my skin is ashen, my malnourished body is gaunt and frail  all physical manifestations of severe drug and alcohol abuse. It's a portrait of a haggard, out-of-shape, high school dropout with waist-length hair, an earring, and a Grateful Dead tattoo, not to mention the posture of the Shaggy character from ScoobyDoo. In the photo, I look like the personification of death. In truth, I am lucky to be alive.

When I was a teenager, my becoming a priest was the last thing anyone would have expected  especially my parents and closest friends. Besides the obvious problem that I was an angry misfit, I had no understanding of God. I had no respect for anyone or anything associated with religion. I was so ignorant of Christianity that I had never even heard of the Virgin Mary. Worse, I disdained Catholicism and laughed at those who practiced it  just as one might snicker about the practices and rituals of a bizarre cult.

In fact, I remember one Christmas when I used the Nativity scene in the neighbors' yard for target practice, plinking them with pellets from my bb gun. And then there was the time when a man called my parents' home and referred to himself as "Father." I didn't know what this meant, so when I answered the phone I said, "Father?" He said, "I'm a Catholic priest. Can I speak with your mother, please?"

I cussed him out, unleashing a stream of expletives  words that I cannot even repeat now  before hanging up on him. My parents had recently converted, and I assumed he was the one responsible for them getting mixed up with this God lie called Catholicism. My mother came running down the hall crying and screaming at me to stop cursing at him, but I didn't care. As you will see, my life was the farthest thing from everything that was good, true, and beautiful. 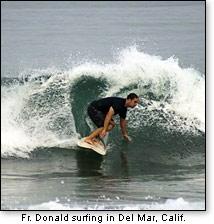 For those of you who can identify with this type of behavior, my experience proves that there is always hope, even for the worst of the worst. You see this is not just my story  this is important to emphasize  it's also a story bound up with God's faithful people. When I travel around the world to give my witness  the testimony of my conversion  I always tell the audience that they, too, are a part of my story. Often times, they respond by asking me, "How is that? We've never known you. And we certainly didn't know you when you were going through your rebellious years or your conversion." I tell them as members of the Body of Christ, the prayers they pray for the conversion of sinners  well, those prayers really work. I am "Exhibit A"  evidence that when people pray, even for people they don't know  miracles can happen. Divine Mercy is for real!

That is why this is not only my story but also the story of a God who is so in love with His people. He listens to and answers their prayers. In these very difficult times, He is literally willing to raise up a bum like myself  someone who wanted to be nothing but a surfing hippie  and to change his life through the intercession of the Virgin Mary.

In writing this book about my life, I am asking the people who read it to continue to pray for me. Having experienced so much mercy and so many graces, I now have a great responsibility to be faithful and to proclaim the message that is the Gospel. As a priest, my role is to proclaim the truth; to be a victim, and to die to myself. That's why I'm a priest. I hope that to the end, like St. Paul, I will be found faithful  that I will run the course to its completion and win the prize.

I need to emphasize that this is not my own message. The Lord has called me to the priesthood so that I can proclaim His message and His saving truth  not adding anything to it, not subtracting anything from it. Today that is a challenge because there are many instances where people want to change the Gospel. They simply find it hard to live or find it difficult because they have been living in a certain pattern of sin.

Be warned: This book will fully expose the sinful side of my former life of which I remain very ashamed. Please understand that I don't recount my past to boast of all the sinful things I did or to appear to be a great sinner. I do it because I need to illustrate the totality and depth of the darkness I was in, so that the full glory and power of God's grace and mercy  especially through the intercession of the Virgin Mary  can be manifested.

For the sake of privacy, I have changed many of the names and places from my past. There is no sense in making old friends or acquaintances a part of this, lest they feel offended or prefer to let bygones be bygones. As for my behavior, I beg their forgiveness and also the collective forgiveness of the reader. It is only by making a "full confession" in this book that what has happened in my life can be fully understood, demonstrating what it is that God is willing to do in the life of a sinner.