March 26, 2010
As some in the secular media continue their attempt to take down Pope Benedict (Phil Lawler has a good commentary on these developments here, by the way), I'd like to revisit two unresolved scandals, both of which involve assertions made by authors.

The first: David Yonke, religion editor of the Toledo Blade, who wrote in his book Sin, Shame, and Secrets (on page 176) that the Diocese of Toledo has a "privileged" file containing information about abortions paid for by the diocese.

Yes, abortions paid for by the diocese!

Below is a scanned image of the pertinent excerpt: 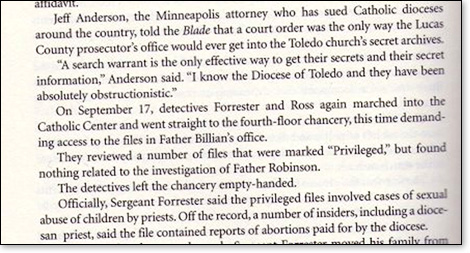 I've written about this scandalous revelation before, on more than one occasion. The reaction from Church officials? 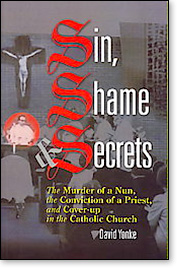 'Matt C. Abbott, a Catholic columnist from Chicago who writes for www.renewamerica.us, contacted me this week about a segment of my book that reports on the Lucas County investigators' search of the Toledo Catholic Diocese's headquarters. The investigators had felt the diocese was withholding information relevant to their case against Robinson and entered the HQ armed with a search warrant  two times  to search diocesan files. The second time, investigators found a file marked 'privileged' that contained documents about abortions for which the diocese had paid. I know this section was a ticking time bomb and is in its own right  apart from the murder, the satanic abuse, and all the other horrors reported in Sin, Shame & Secrets  a terribly disturbing revelation for a church that is vehemently pro-life.

'For a number of reasons I won't go into here, I felt it was absolutely necessary to report the investigators' findings, but I did not try to shine a spotlight on that specific section of my book. In fact, when asked during repeated interviews if there were any new revelations in the book, I passed on mentioning this one. But I knew it was only a matter of time until it came out. Now Mr. Abbott has opened the door, and things are going to get interesting. Stay tuned...'

The crickets are deafening.


The second: Father Andrew Greeley, is his 1999 non-fiction book Furthermore! Memories of a Parish Priest, wrote about a yet-to-be-exposed "ring of predators."

Below are scanned images of the pertinent excerpts:

I've written about this matter on several occasions, including here, here and here.


Regarding all the discussion about the cause(s) of the clergy abuse scandal, a clergy abuse survivor said in an (edited) e-mail to me:

'Too many people co-opt the treatment of clergy crimes for an agenda, either conservative or liberal: it's the celibate clergy; it's the evil heretics; it's the male-dominated priesthood; it's the patriarchy; it's the bad liturgy and bad seminaries; it's the psychologists.

'It is [actually] evil choices made by men who choose to serve the evil one directly or indirectly (seeking wealth and power), who turn what is in their purview to that service, and who choose not to do justice for the victim and justice to the malefactors.

'It is still happening, and now it has the nice cover of lace surplices and orthodoxy. The devil is orthodox, and he can hide as well in lace as in revolutionary fatigues. A little governance could have saved so many, both victims and perpetrators. Justice is charity in these cases, and it was completely neglected by the Church, up to the pope.'

"Criticism of Catholic Church is unfair"

"A Response to the New York Times"

"Keeping the record straight on Benedict and the crisis"