May 27, 2010
(First, I'd like to ask my readers to pray for U.S. seminarian Philip Gerard Johnson, who's battling brain cancer; and for pro-life activist Randall Terry's seven-year-old son Randy, who recently began a series of surgeries to correct a significant vascular malformation on his face.)

Many thanks to the Ukrainian Catholic Education Foundation and UCEF official/journalist Marta Kolomayets for proving me with the following article (edited):

In strong-arm tactics reminiscent of the Soviet Union, a Lviv representative from the former KGB, now the Security Services of Ukraine (SBU), paid a visit to the rector of the Ukrainian Catholic University on Tuesday, May 18.

Unfortunately, this was not the first time the Ukrainian Catholic University has been visited by the 'Fifth Column,' as the agency has been labeled in the past.

In March 2001, Father Borys Gudziak and his fellow vice rectors, including Myroslav Marynovych, were visited by the Security Services, who were disturbed by student protests hoping to bring down then Ukrainian president, Leonid Kuchma. The campaign, known as 'Ukraine without Kuchma,' began soon after the slaying of Ukrainian journalist and investigative reporter Georgi Gongadze.

In 2001 the Security Services asked the rectorate to inform the ministry of any planned student actions or unrest, recalled Father Gudziak. 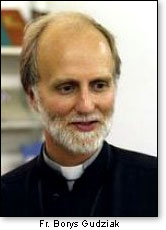 'I was not an informant during the days of the Soviet Union, and I'm not about to start in an independent Ukraine,' said Mr. Marynovych, who was a prisoner of conscience and spent seven years in Perm's labor camps and three years in exile in Kazakhstan.

Nine years ago, the SBU presented Father Gudziak with a veiled threat of deportation, but pressure from The Economist and then U.S. Ambassador to Ukraine Carlos Pascual put an end to actions of the overzealous police.

This week (May 23), once again, The Economist published a piece on the 'spooks of Russia and Ukraine,' noting that 'given the way the SBU has been behaving of late, the difference between its tactics and those of the Russia's FSB seems to be narrowing.'

May 18 was the first time that the rector of the Ukrainian Catholic University was asked to sign a letter from the SBU. Although he did not read the text of the letter, nor did he sign anything, Father Gudziak assumes it was in the same vein as that of the 2001 visit.

The students of the Ukrainian Catholic University, which reopened in Lviv more than 15 years ago  it had been closed down in 1945 by the Soviet regime which banned the Ukrainian Greek Catholic Church  have always been civically conscious, often peacefully protesting lack of reforms in the government. They were also very supportive of the Orange Revolution, spending time in Kyiv on the Maidan to see that justice prevails. Many of the students have considered this peaceful revolution a 'living course in democracy.'

When the new Yanukovych regime took over in the halls of power, the students of the Ukrainian Catholic University and Lviv State University were the first to speak out against Education Minister Dmytro Tabachnyk, who allegedly wants to revert back to a Soviet style of education, going so far as revealing his plans to rewrite modern Ukrainian history.

President Viktor Yanukovych is scheduled to visit Lviv on Thursday, May 27; Father Gudziak would gladly meet with him, but to date, no invitation has been extended by the Ukrainian president.