June 14, 2010
I recently had the pleasure of having a lengthy telephone conversation with Dawn Stefanowicz, author of the book Out from Under: The Impact of Homosexual Parenting.

Dawn has an important story to tell, particularly at a time when the homosexual lobby is making significant inroads into family life. Yes, there are, sad to say, a number of bad parents who are heterosexual. But homosexual parenting, like homosexual "marriage," is not a good thing.

The Introduction to Out from Under is chilling: 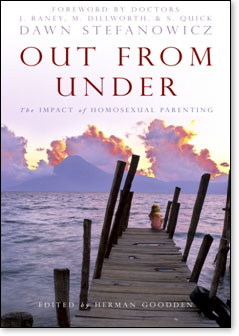 'Will you come with me to the end of the pier?' Dad asks. Ordinarily there is nothing I long for more than times alone with this man I too rarely get to be with. But tonight his question fills me with foreboding. The old wooden pier stretches out into the inky blue lake to a depth where the water that laps against its weathered posts is well over my head. I'm a pretty good swimmer, but even so, his request unnerves me. It would be one thing to walk out there with a father who loved me unconditionally and could be depended on to protect me, but more and more I am coming to understand that this is not the kind of father I have.

I am nine years old, and our family is staying for a week in mid August at the cottage of some friends. At least, I've been here all week with my mother and brothers. Mom's inside now, cleaning up after supper, and my brothers have run off into the woods to play. While Dad helped bring us all up here and he is here this last night of our holidays, most of this week he has been unwilling to stay with us. It hasn't been work that has called him away, but pleasure. The hard truth that all of us struggle to understand is that Dad prefers the company of other men to that of his wife and children. A few of the transitory and violent relationships he has had with these men have ended in their suicides. Though I cannot help but love him, I am starting to see that my father is a very dangerous man. If he can behave so abominably toward those men he professes to love, then what might he do to those he does not love, like us?

'Dawn, will you come with me to the end of the pier?' he asks again. 'So I can get a picture?' I hadn't noticed the camera before. This calms some of my fear but not all of it. We proceed along the boardwalk of sun-bleached boards, and about three-quarters of the way out he stops and waves me out to the very end. Out this far the boards don't feel as solid as I'd like, but I want to please him and so I go out to perch on the very last one and turn around to face him. 'That's fine; stay there,' he calls, framing the shot as I gingerly kneel down on one knee, holding the front paws of our Chihuahua, Skipper, who  just as nervous as I am  carefully balances on his hind legs. The picture taken, Dad immediately and wordlessly turns and walks away, leaving me alone and afraid in this precarious place to which he's invited me. This is the story of my life.

And it's been a difficult life for Dawn  then and now. She has to face the wrath of gay activists and a less-than-friendly government (she resides in Canada). But she's up to the task.

In her book's Preface, Dawn writes: "The purpose in writing this book is to deliver an open, honest, and balanced account of what it was like growing up with a homosexual father and a weak, subservient mother. As a child, I struggled to deal with all the vivid and explicit sexual experiences, conflicts, and confusion I faced within this family setting."

Dawn has "come across individuals in North America who have publicly shared aspects of their personal stories of growing up with a same-sex attracted parent, and the difficulties that arose for them in that environment."

Despite the many troubling and emotionally damaging situations she encountered while growing up, Dawn writes that she "will always love" her father, who died in 1991.

"In writing this book, my aim is not to hurt his name or reputation in any way. Rather, I would like to honor him, but still present a picture of our family life in an open and honest manner. I desire to share my own moments of joy as well as my struggles, pain, fear, and confusion in a manner that will broaden the reader's understanding of how parents and family can affect their children."

The book's Foreword and Afterword were written by John Raney, M.D., Marc S. Dillworth, Ph.D., and Sharon Quick, M.D. They write: "In an imperfect world, one would expect to see some problems in most households, regardless of whether the parents are involved in same- or opposite-sex relationships. Unfortunately, there are those who, with misguided political correctness, would like to silence any description of problems among those with homosexual relationships. Despite this, Dawn has had the courage to gift the reading public with her very personal life story, and so enhance our understanding of the kinds of challenges one might perhaps see in some of these newer forms of households."