August 14, 2010
Although I'm a staunch, orthodox Catholic, I still consider myself an advocate for clergy/religious abuse survivors, for which I make no apologies. I was able to attend the opening session of the 2010 Survivors Network of Those Abused by Priests (SNAP) conference. It was a somber experience, and it made me realize how difficult it would be if I had ever been abused by a priest or nun  and no, I'm not talking about getting hit on the wrist with a ruler  to remain a practicing Catholic.

I love the Church and will, with God's grace, remain faithful to her teachings until the day I die. But I do have great sympathy for the survivors, even if they've abandoned the Church as a result of what they experienced. (Of course, I don't have sympathy for those who bash the Church simply because they want to continue living an immoral lifestyle, be it heterosexual or homosexual.)

We've read, and heard, a lot about clergy abuse in recent times, but not so much about abuse by religious. Yet such abuse has happened to a number of people over the last several decades, and it shouldn't be overlooked.

Below is the full legal complaint against the Diocese of Sioux Falls, the Tekakwitha Orphanage for Native Americans, the Oblates of Mary Immaculate, and the Sisters of the Divine Savior. In the lawsuit  you can read a recent newspaper story about it here  several religious, in addition to the priests, are accused of sexual, physical and mental abuse against the plaintiffs. The allegations are sickening, and, due to the frank descriptions of the alleged abuse, reader discretion is advised.

Pray for those who have suffered physical, sexual or mental abuse during the course of their lives. 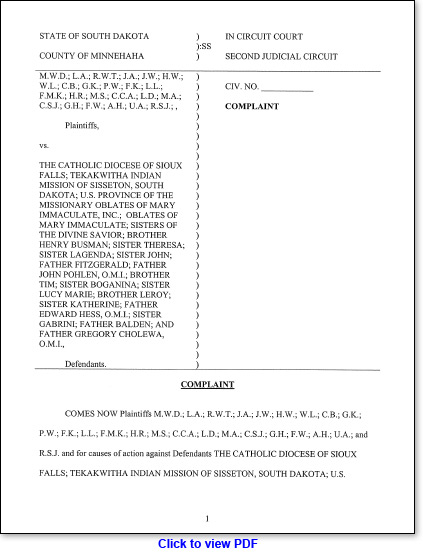 "A Crisis of Saints"