September 12, 2010
The following is a selection of (edited) e-mails I've received in recent days. Thanks to all who send me thoughtful and insightful responses to my columns.

Keeping in line with the phantom 'interfaith dialogue,' politically correct Islamist apologists at the archdiocesan newspaper [of Portland] are defending the mosque/community center near Ground Zero: 'What does this say about us?'

'We have no sympathy for those whose objections to the building are rooted in Islamophobia and distrust,' wrote the editors.

We can conclude, then, that according to the Catholic Sentinel editorial, all 70 percent of Americans who think the mosque at Ground Zero is inappropriate must be 'Islamophobic.' I'm proud to be in such good company and will not back down no matter how hard the editors talk down to me. I'm very disappointed in the Sentinel editorial. They've marginalized people like me by name-calling. I'm deeply insulted that the editors took it upon themselves to belittle me and others like me who oppose this one mosque. The hard truth is this: We are rational and we fear radical Islam and Sharia-creep.

In addition, Matt Cato, director of the Archdiocesan Justice and Peace Office, penned a commentary in his newsletter, Just Peace, in defense of the mosque near Ground Zero. He expressed his disgust at those of us who are opposed to the mosque. Cato is offended because opponents of the mosque are 'discriminating against a group of people, Muslims,' and that the opponents have made a 'tenuous connection of religion to the Islamist extremists.'

It's sad to me that Cato has made a rash judgment of 70 percent of Americans. Worse, it is frightening to me that Cato is so ignorant  and I do not like to use that word  of the connection between the religion of Islam as set forth in the Koran and the Hadith, the writings of Islamic scholars. I do not know where Cato believes the Islamists draw their beliefs from other than the Koran and the Hadith.

It appears the Sentinel editors and Cato have placed their ideals of multiculturalism and interfaith dialogue above that of, and at the expense of, the raw emotions experienced by most Americans since 9/11. (While I recognize with humility that Pope Benedict XVI encourages interfaith dialogue, I interpret his calling to be a dialogue among leaders. I doubt the average Catholic or Muslim is engaged in this dialogue. That's for another debate, however.)

The outrage over this one mosque is not about religious intolerance or discrimination; it's about the insensitivity of the radical Islamist planners. It is they who are intolerant of our pain and suffering! They're rubbing salt into our wounds seared into our flesh and souls since 9/11. The imam in charge of the project is defiant and will not back down. Imam Rauf has warned the U.S. on Larry King that America would not be safe if the mosque is not built at that location.

The following sums up my position: 'To defenders of the mosque, please don't bring up religious freedom and tolerance  those are givens in America. Understand instead that this mosque might look suspiciously like a triumphal arch to most of us, and definitely like rubbing salt in a wound. Just think decency, decorum, consideration and respect and don't build that mosque.' (letter to the Spectator)

To the editors of the Catholic Sentinel: A 'phobia' is an irrational fear. Fear of the Islamization of America is real. It is not 'rhetoric' either, as described in the Sentinel's Sept. 1 editorial. Catholic scholar and papal biographer George Weigel said on EWTN's World Over Live that 'the 'Islamophobia' charge is utterly ridiculous. It is an insult to Americans who have behaved with equanimity towards Muslims since 9/11.'

I found your statement that 'the conservative movement has been infiltrated by, and capitulated to, the homosexual lobby' a very interesting one as it illustrates the confusion about political terminology that characterizes debate today. I would like to make a distinction here that might help to clarify our thinking.

Traditionally, the right/left spectrum has referred to a difference of political economy. The rightist position favors the owning classes, whereas the leftist position favors the working classes. This spectrum is concerned with differences on issues like socialized medicine, tax policy, financial regulation, tariffs and trade. Think about it: There is no Socialist position on abortion because this issue is personal and does not affect the class struggle. 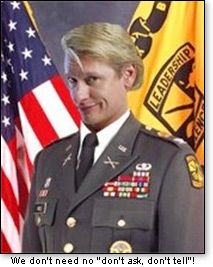 Once we make this distinction, we see that the homosexualist 'conservatives' are actually just right-wing liberals or 'libertarians,' if you will, who favor owning class economics and greater personal liberty. Barry Goldwater, 'Mr. Conservative,' while remaining solidly right-wing, became ever more liberal towards the end of his life, even favoring gays in the military.

Political parties in America only make sense if you understand that while the Republicans campaign as 'conservative,' they govern as 'right-wing,' and that similarly, the Democrats campaign as working class but then govern as bourgeois liberals. This is why people hate politics. Most Americans want New Deal economics and Eisenhower era morality, but the Republicans give them Hoover era economics while the Democrats give them McGovern's 'abortion, amnesty, and acid.'

As for myself, I am hard left and moderately conservative, a 'National Bolshevik' like Oswald Spengler. I have voted for both Pat Buchanan (who is really rather leftist in his pro-working-class views) and Ralph Nader (who is hard-left and just doesn't seem to care much about cultural issues). In 2008 I voted Democratic hoping to get socialized medicine and an end to imperialist warmongering, only to be disgusted when I got gays in the military (a non-issue if there ever was one) and another pro-abortion Supreme Court Justice.

You, I imagine, are a fairly old-fashioned right-wing conservative who feels betrayed by the Republican Party's growing liberalism. As Thomas Frank puts it: 'Vote to stop abortion; receive a rollback in capital gains taxes. Vote to make our country strong again; receive deindustrialization. Vote to screw those politically correct college professors; receive electricity deregulation. Vote to get government off our backs; receive conglomeration and monopoly everywhere from media to meatpacking. Vote to stand tall against terrorists; receive Social Security privatization. Vote to strike a blow against elitism; receive a social order in which wealth is more concentrated then ever before in our lifetimes, in which workers have been stripped of power and CEOs are rewarded in a manner beyond imagining.'

I hope this note has given you food for thought. It is interesting to note that, as a Catholic and leftist I have received a lot more grief from my leftist friends for my pro-life stance than I have ever gotten from my Catholic friends for my socialism.

I just read your column on the pro-life film "Blood Money." Well done. Thank you for being an advocate for life and for the truth of the Catholic faith. I wanted to suggest a story idea to you. My wife and I are supporting a wonderful pro-life GOP congressional candidate, Mike Fitzpatrick, in the race for Pennsylvania's 8th district, which comprises parts of Philadelphia and its northeastern suburbs.

We're supporting Mike because he's a great Catholic candidate: committed in his pro-life and pro-family positions, the father of 6 kids, a respected lawyer and former U.S. congressman who held the seat for one term, from 2004-2006. He is exactly the type of man we need representing us in government.

It might be interesting to contrast a candidate like this with his opponent, the current incumbent, Patrick Murphy, a 100 percent pro-choice 'Catholic' Democrat whose most notable legislative action has been as sponsor of the amendment to repeal the military's 'don't ask, don't tell' policy. Congressman Murphy also has a 100 percent rating from the National Abortion Rights Action League, which gave him its endorsement here.

Mike Fitzpatrick, on the other hand, has a 100 percent approval rating from the National Right to Life Committee. He is the only pro-life U.S. congressman to have served Pennsylvania's 8th district since before Roe v. Wade.

The last vote on these two candidates, which saw Mike lose the seat to Murphy in 2006, was decided by a slim margin of only 1400 votes! This election is expected to be very close.

This particular race is a good indication of where our country and our Church are at the moment. On one hand we have faithful, orthodox and loyal Christians living our their faith in the public square; on the other we have nominally Christian politicians claiming to be faithful while contradicting Church teaching on many issues. It's important to raise awareness among the pro-life community about what is at stake in November, and I think this race is a great example of that.

'Inside Islam: A Guide for Catholics'