Matt C. Abbott
On love for the pope

September 16, 2010
As Pope Benedict XVI travels to hostile territory for the next few days, I recall an allocution by Pope St. Pius X (delivered in 1912) on love for the pope  something all Catholics should heed in these tumultuous times. 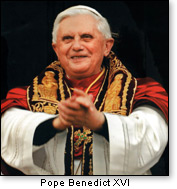 '...[W]hen we love the Pope, we do not dispute whether he commands or requires a thing, or seek to know where the strict obligation of obedience lies, or in what matter we must obey; when we love the Pope we do not say that he has not yet spoken clearly  as if he were required to speak his will in every man's ear, and to utter it not only by word of mouth but in letters and public documents as well. Nor do we cast doubt on his orders, alleging the pretext which comes easily to the man who does not want to obey, that it is not the Pope who is commanding, but some one in his entourage. We do not limit the field in which he can and ought to exercise his authority; we do not oppose to the Pope's authority that of other persons  no matter how learned  who differ from the Pope. For whatever may be their learning, they are not holy, for where there is holiness there cannot be disagreement with the Pope.' 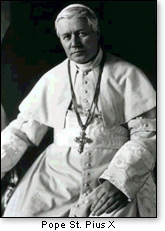 (The above quote comes from the book The Pope, the Council, and the Mass, by James Likoudis and Kenneth D. Whitehead.)

Of course, I realize Pope St. Pius X's allocution will likely spark some debate, even among faithful Catholics. Well, why not?