You may look at the time-stamp on this message and wonder, what am I doing sending e-mails at this ungodly hour? I have a good explanation: I'm watching the Chilean television coverage of the rescue at the San José mine, near Copiapó in Chile's Atacama Desert, 10,000 feet over sea level with mountains reaching well over 20,000 feet on both sides. That is a terrible place. If it never rains in southern California, it rains even less in Atacama. The sparse life that survives there depends on the camanchaca (the blinder), a very thick fog that ascends from the Pacific at night. If you think you have seen thick fog, just wait until you see the camanchaca in full force. It is an experience very close to being totally blind. That humidity is almost the only source of water around there.

The mine where the miners were trapped has been in operation since about 10 years after the American Civil War. It was called San José — perhaps in an attempt to seek the protection of the patron saint of workers, St. Joseph. The company owning the mine, now financially defunct, was called San Esteban. That is a rather curious choice of name for a mine. After all, St. Stephen was the first Christian martyr who died under a hail of stones as decreed by the Sanhedrin of Jerusalem in the first century. The idea of being crushed by stones like poor Stephen is not too far from the mind of miners. Well, at least they did not call it Lazarus. 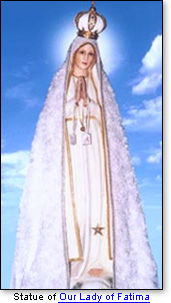 The accident that locked the miners more than half a mile below the surface occurred on August 5, the day of St. Mary Major. There were 33 miners trapped and it took 33 days to drill the escape tunnel. The first miner came out on the first minutes of October 13, when Catholics remember the anniversary of the miracle of the sun that occurred in Fatima, Portugal in 1917. The date has a curious coincidence (10-13-10) if one adds its numbers the result is 33. But maybe I'm stretching things a bit.

I just want to think there is a message for us in this modern day miracle. Think of it. These 33 miners, simple men, family men, with wives and girlfriends, sons and daughters, have in common one thing: dire poverty. Because one does not seek to work in a 140-year-old mine unless one is in real need for work. Those who accept that kind of work do it because they're facing slim pickings.

If you don't know how poor people live in Chile, I suggest you find out. Then multiply the misery by 10 — that is the kind of harsh life one can expect to live in the Atacama desert. Chile is a suffering country that was almost delivered into the hands of a Communist government that almost managed to destroy it in just four short years during the 1970s. The country has just begun to climb out of that ditch in the last decade. Chileans are very patriotic by nature; and tough...like no one else on earth. The miners are toughest among the tough and poorest among the poor, but that did not stop them from being believers. While buried in the mine, each of the miners received a rosary blessed by Pope Benedict. They prayed non-stop and had a little altar with religious images built in their refuge.

Did you see the early stages of the rescue? If you did, you may have noticed the president of Chile making the Sign of the Cross. He felt no shame to give thanks to God for preserving the miners' lives. Among other things he praised his fellow Chileans for working so well during the recent earthquake and in this later disaster. He used the opportunity not to steal the limelight for himself but to remind his countrymen that they can work in unity everyday; and that they should not wait until a disaster strikes to work together like brothers and sisters for the good of Chile.

It reminds me of how things used to be in our country when ordinary people solved things by rolling their sleeves and getting to work where and when there was a need. Somehow we have temporarily lost that ability. We witnessed the supreme incompetence of federal officials during Hurricane Katrina and got a lesson from them in how not to do things during the last oil spill in the Gulf of Mexico.

Compare those actions with the Chilean's rescue operation. In 33 days, this third-world country can dig a hole precisely where it's needed, coordinating the efforts of various private companies (one from the U.S.) and government agencies (NASA included) from all over the globe. The whole engineering of the rescue operation looked like one of those old ballroom movies, with everyone working with amazing accuracy and perfect timing. I wish they would have been in charge of the Gulf spill.

One thing we sure have learned: The Chilean president believes in God and has no qualms about showing his faith and giving thanks to God for his good luck. When he kissed his lovely wife, one could tell he was really happy to do it. There was emotion and love in his embrace — and some tears of sheer happiness. No fake feelings for media consumption.

It would be nice if we could imitate Chile's example. Their country is very far from being as blessed as ours with regard to natural resources, but they're grateful for what they have. The refrain of their national anthem goes like this:

Chile, pure is your blue sky,
Pure breezes flow across you,
And your field of flowers embroidered
Is a happy copy of Eden
Majestic is the white mountain
Your bastion, a gift of the Lord

Looks like the ACLU has not reached that far yet. Good!


Please remember, and pray for, those miners who have lost their lives in mining accidents over the years.

Our Lady of Fatima, pray for us!