October 21, 2010
Getting favorable, or even fair, coverage in the mainstream media is something the pro-life movement has struggled mightily with for many years.

Is it possible for pro-lifers to get such coverage? And should pro-life organizations at least attempt to build a positive relationship with the mainstream media?

Yes to both questions, says Tom Ciesielka, president of TC Public Relations, a "boutique" communications agency in Chicago that counts the Pro-Life Action League and the Thomas More Society among their list of Christian clients.

Below is a brief interview with Ciesielka, who has been a great assistance to yours truly over the last couple of years.

Should pro-life organizations avoid reaching out to the liberal media? 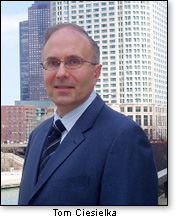 Ciesielka: I don't believe a liberal "media" exist per se. That's like saying the United States is a Christian nation. Those generalities don't work in today's communications landscape. Would I avoid connecting with media outlets that cover, say, Democrats for Life? Of course not, regardless of where my clients are on the political spectrum. However, to those who assert that the media lean toward the liberal end — an assertion with which I would agree — I say yes, we should reach out to them, and for a couple of reasons.

First, many pro-life organizations today are doing a better job of communicating and connecting with their base of supporters. For example, the Pro-Life Action League keeps its supporters informed through a robust newsroom and blog, and it sends out e-mail updates on actions and events — and gives live updates via its Twitter account. Outside of this large base of supporters, mainstream or "opposition" media are rich new sources of conversation and debate.

Second, engagement is what it's all about with regard to online communications. A healthy debate at a mainstream media outlet is exactly where the pro-life movement needs to be. The pro-life movement is about changing hearts and minds to see the gift of life from God starting at conception. Think of it this way: The pro-abortion advocate is a pro-lifer in waiting. Abortionists convert to life, politicians convert to life, and that's the great commission of Jesus to go and make disciples of all people. While on earth, Jesus communicated with some pretty crummy people. Shouldn't pro-life organization follow His example?

What can pro-life organizations accomplish with in-house marketing efforts?

Ciesielka: For many smaller and all-volunteer organizations, in-house marketing is all that's available to promote the main message. And that message has to start with determining what is going to be unique about who the organization serves. Are you going to focus on a region, such as Iowa Right to Life, or on a particular religious denomination, such as Priests for Life?

My suggestion for pro-life nonprofits with no marketing dollars would be to find a Christian college or university with a marketing or communications program and see about getting some students to help plan and implement a marketing plan. Once it's up and running, find a volunteer who would enjoy maintaining that effort.

When might pro-life organizations need outside media relations help?

Ciesielka: There are a couple critical times to bring in a third party for help with media relations. First, when organizations are doing something that is likely to generate attention from mainstream media or possibly cause a confrontation with government leaders or the police. Second, if they're planning a protest outside a Planned Parenthood facility or are planning to picket outside the home of a local abortionist, there's potential for crisis communications when the media might see the organization as being angry and not loving.

One thing that makes my blood boil is when I see a pro-lifer protesting and telling the opposition, "You're going hell, and God is on our side!" Yes, God is grieved when His creation destroys life and we'll all be accountable for our actions on Judgment Day. But in the meantime, we should speak the truth in love and leave it at that. Take Jesus' word on that, not mine. A media relations specialist can help shape the pro-life message for all pro-lifers and prayer warriors to make sure there is no need for crisis communications on the scene of a protest.

What should pro-life organizations do to establish lasting relationships with media?

Ciesielka: Make friends before you need them. Find out who's likely to cover what you're doing and extend an invitation for coffee to share what your organization is all about. Then when something big comes along, you've started a relationship and have a better chance of getting your side of the story told.

Have a media list ready and current. Make a list of all the media in your area of influence; find out who to contact when you have a news items and keep that contact information current. Don't be overwhelmed with the choices. Yes, social media are taking over the communications landscape and you need to know how to use it. However, spend some time researching the best online groups or local online media networks and make a "Top 10" of who you want to reach out to with personal messages. If you go wide and thin, you lessen the impact of your communications.

Are social media just as valuable as traditional media?

Ciesielka: Is Coke better than Pepsi? It depends on which taste your audience prefers. And by the way, you can't assume older adults prefer traditional print media and younger people do everything online. Social media sites are seeing some of their biggest increases from people over 40.

Here's what matters most: Who do you want to reach, and which media are likely to get their attention? That's just the tip of the iceberg, as there are social media experts who can tell you, for example, how to market hand-painted Christmas cards via Facebook. Even the pro-life message is fragmented and targeted. Do you want to stop people from thinking abortion is just another medical procedure, or do you want women who had an abortion to know there is still hope despite making a very scarring decision? Depending on the message and your audience, it could change the type of media — social, traditional, or other — that is most appropriate.

What can pro-life organizations do to help their fundraising efforts without constantly (and seemingly) "begging" for donations?

Ciesielka: People don't like beggars, but they do like giving to causes with which they connect. When my pastor tells me that our church is short of funds for the fiscal year, I don't think, "Here he goes again, hat in hand," and write the church a check. I think, "This is the place where I receive spiritual food. This is the place where my child (soon to be children) get quality care in the nursery during service. It's a place where the pastor for families will listen to me share my joys and sorrows and give me solid biblical advice on how to deal with trials in life." Thus, when my pastor asks for money, I give willingly. The same is true for pro-life organizations. Take the time to be of value to your supporters; people will then be more likely to give.

What do media look for with pro-life/pro-family events?

Ciesielka: The media look for a good story. A few years back, our agency worked on media relations when Planned Parenthood was about to sneak into Aurora, Illinois, and open what at that time was the largest abortion facility in the nation. Eric Scheidler, executive director of the Pro-Life Action League, and Tom Brejcha, president and chief counsel of the Thomas More Society, asked me to speak at a rally of pro-life supporters before they began a series of protests in Aurora.

I shared that the media (all media, even conservative Christian media) want a good story. All media look for something newsworthy and something that matters to their audience. It's very simple. Think about what you want to communicate, decide on who will see value in that information, and give them the truth is an easy-to-understand package.

I can tell you that all of Aurora is not pro-life. However, when the residential community near the Planned Parenthood learned the truth of little babies being slaughtered less than 100 yards away, regardless of their position, it became a practical concern for these neighbors to recognize and communicate with the protesters. Hopefully, it was a life-changing experience for them to rethink their position on abortion.