January 20, 2011
In wake of the news that the late Pope John Paul II will be beatified on May 1, Father James Farfaglia, parish priest and author of two books (one of which, Get Serious! A Survival Guide for Serious Catholics, will be released on March 9), reacts as follows:

'It is no surprise that our beloved John Paul II will be beatified so quickly. As his funeral concluded, thousands spontaneously proclaimed 'santo subito.' I was overjoyed when I read the official Vatican news that he will be beatified on May 1, Divine Mercy Sunday. The Soviet Empire has crumbled, the false ideologies of our modern world are collapsing, and the enemies that infiltrated the Church during the 1960s and 1970s are dying off and being replaced by a new army of committed Catholics formed and inspired during his pontificate — the John Paul II generation. I am part of that generation. 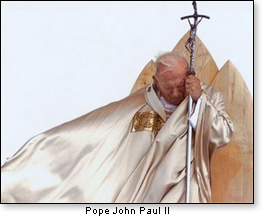 'My seminary journey to the priesthood began in the summer of 1978. Amazing events in the Church took place. Paul VI died on August 6, the Feast of the Transfiguration, just as he said he would one year earlier. The sudden and unexpected death of John Paul I shocked the world. Then the one who was called from a paese lontano (a far-away country) was elected as the bishop of Rome. My entire journey to awesome gift of the Catholic priesthood was marked by the intense and dynamic pontificate of John Paul II. I read everything he wrote and followed intensely every one of his apostolic journeys. Many times I had the amazing opportunities to meet him, speak with him briefly, and even serve one of his Masses in the Vatican.

'After Jesus Christ, John Paul II has had the most influence on my life. He certainly taught what it means to be a priest of Jesus Christ.

'Last June I attended the closing events in Rome for the Year for Priests. It was my first trip to Rome without the presence of John Paul II. I visited his tomb and I realized how much I really do miss him. However, with his beatification in May and, I'm sure, a swift canonization, I can enjoy his presence in this life because he is truly a saint in Heaven. Viva il Papa! Santo subito!'

Considerable material on the late pope can be found on CatholicCulture.org.

But not everyone shares Father Farfaglia's enthusiasm for the upcoming beatification. John Vennari, editor of Catholic Family News, has issued a statement that can be read by clicking here. SNAP has issued a statement urging "Vatican officials to move cautiously in their haste to honor Pope John Paul II." And Mary Ann Kreitzer, president and editor of Les Femmes, The Women of Truth, wrote in a recent blog post: "While I have no doubt he was personally holy, his actions during his pontificate were often baffling and imprudent...."