Matt C. Abbott
Attention March for Life attendees: I'm with you in spirit!

January 22, 2011
Very soon tens of thousands — perhaps hundreds of thousands — of pro-lifers will gather in Washington, D.C. to proclaim respect for the sanctity of human life from womb to tomb.

I won't be there in person, but I'll definitely be there in spirit. We pro-lifers want an end to government-sanctioned baby-killing. Enough is enough. Granted, the law won't change for the foreseeable future, but that won't deter us.

'As we are preparing to march in the defense of life, we should ask ourselves: Why do we love life; what is the real meaning of this love; and most important of all, what does it lead us to do — because love without action is dead. It should be evident that our defense of the most basic gift from God cannot be based on mere feelings or on emotional reactions, but on solid reasons. 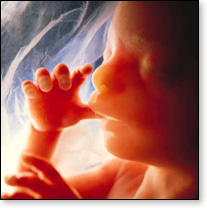 'Love is not merely a feeling, but is rather the desire for the best possible good for those whom we love. Through our natural intelligence and through Divine Revelation we become aware of the value of this most basic of all gifts which is life. Mere reason leads us to comprehend that it is better to be alive than never have had been in existence. The knowledge of the value of life that comes through revelation leads us to understand better this gift and to appreciate it: as a result, we worship and love more and more the Giver of this gift. This love is what moves us to protect the life of the unborn or any who might be unjustly treated. We are also led to protect women that might feel tempted or forced to commit abortion, as we know the devastating consequences that abortion will have in their lives. Last but not least we have to love, even if most of them seem to be utterly unlovable, the many perpetrators of abortion: medical personnel, and pro-abortion activists and politicians. We have to do everything that we can to convince them of their errors so that they repent and change their ways, both for their own benefit and for the benefit of society.

'All human beings are created in the image and likeness of God. Using a traditional scholastic term, we can state that He is the exemplary cause of every human being, in other words, He is the model on which all human beings are created. He looked upon himself and wished that other beings would share in His own happiness. So if we reflect upon ourselves, we can begin to understand our participation in the greatness of our Creator. This participation on His greatness leads us to comprehend that He has brought us out of nothing with a purpose, because knowing His intelligence and His loving nature it is clear that all His actions are always guided by a magnificent purpose. The first intention for which He has created us is that we should enjoy for an eternity His loving company in Heaven. All human persons are called to this eternal and loving company, no one is excluded, save those who, through their own actions, exclude themselves.

'This manner of creation brings us to understand the unique essential dignity of every human being. A dignity that is not lost for any deprivation of the many external perfections that we might expect to find in a human person. A person might be born with a disability, or may suffer disability through injury or disease, but these deprivations do not affect his basic dignity. A Christian also has the hope that one day when the doors of Paradise will be opened for those children, all their human imperfections will be healed and they will enjoy forever the beatific vision that we all longing for.

'We are also created to be collaborators in the salvation of the World. The Lord normally does not intervene directly in the world; He does it through our free collaboration in his plans of salvation. He gives to us the saving truths through Holy Scripture, our natural reason and the mediation of the Church and we have to manifest them in our daily lives. If we love those truths we should be impelled to share them with all whom the Lord places in front of us. So when we speak with love and conviction of those truths, and in particular these next days when we speak of life and family, we cannot be accused of carrying out an exaggerated rhetoric when we defend human life from its biological beginning until natural death.

'Nobody in his right mind can call it "vitriolic rhetoric" when we denounce that millions upon millions of unborn babies have been killed in the womb in the U.S. and in the rest of the world. It is literally a question of life and death, for the victim, for the mother of the baby and for the perpetrator of abortion, assisted suicide or euthanasia. The victim will have his earthly life terminated; the mother will suffer greatly for her actions, and the perpetrator and the mother will live under the shadow of the unhappiness of having rejected the loving truths of their Creator and certainly they will place their eternal salvation in jeopardy. Our main solidarity has to be always with the victim of the crime, because if the conscience of the nation is not moved by this growing injustice, we know that a growing number will be victimized in the future. Our solidarity is also with the mothers of those babies because often they have been misled or forced into committing this terrible action.

'We have also to keep in mind that few, if any, women are warned that having an abortion greatly increases their risk of breast cancer. Dr. Joel Brind, professor of endocrinology at Baruch College, City University of New York, and a director at the Breast Cancer Prevention Institute, has just demonstrated that abortion has led to 300,000 additional breast cancer deaths in the United States since the Roe v. Wade Supreme Court decision legalized this horrible crime.

'Last but not least we wish and pray that all abortionists will understand the terrible consequences of their actions and be converted.

'On Monday, January 24, we will march through the avenues of Washington, D.C. pleading to the Lord and hoping to impress upon the conscience of our nation that this terrible crime should come to an end.'