Those are the topics covered in the book Disorientation: How to Go to College Without Losing Your Mind, edited by Catholic author and professor John Zmirak.

Below is the book's Epilogue, written by John Zmirak. Many thanks to Matthew Pinto and Mike Flickinger of Ascension Press for allowing me to reprint this material.

Will Your College Years Be a Waste of Time?

By John Zmirak
Life is short, but books are long. While the dull parts might seem to drag on endlessly, these four years you're spending in college will be over in a flash. Trust me. In a shockingly short time, you really will have to spend forty to seventy hours per week answering "urgent" emails, doing tedious research for lazy superiors, treading minefields of office politics, placating narcissists, and fetching older, fatter people coffee. Whatever your chosen field, it will be years before you get to the exciting parts. You can think of the intervening tediousness as apprenticeship, "paying your dues," or vocational hazing. But it won't be fun and it's going to last for years and years. While it's happening, you will find yourself so tired at day's end that you will rarely crack any of those unread Great Books you piled up in college and schlepped from one apartment to another. Instead, you will be proud of yourself for listening to National Public Radio or Fox News as you drift off into a nap. You know, just like your parents....

Never again will you have four consecutive years in which you are privileged, at other people's expense, to hang out in comfy lounges with coffee machines doing little but meditate on the meaning of life, the structure of history, the nature of man and how he can best live in community. This is your big chance to form your mind, shape it and test it in habits of clear and consistent thought. You really do have time now — as you probably never will again — to say something like: "People keep talking about how central Hegel is. I wonder what that's about. This book is four hundred pages ... okay, I'll give it a read."

So here's my message to students who want to make a difference in the world someday: Sign up for hard-core, serious courses and for the love of God do the reading. I wish I had. As a college professor now, I wouldn't be playing catch-up, racing through books I should have mastered when I was seventeen. 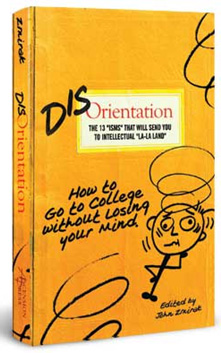 Choose your classes carefully. I edit a guide to hundreds of American schools called Choosing the Right College, so I can say this with some authority: Most colleges' curricula are trash, including those at Ivy League universities. These schools' bland "distributional requirements" assign equal value to courses like "Shakespeare's Tragedies" and "Godzilla in the Mist: Japanese Postwar Cinema." Unless you are attending one the Great Books schools, your college probably won't require you to master the fundamentals of Western civilization, where the Church took root and formed its doctrines. You will need to piece together such an education on your own.

Here's how to do it: Dig through your school's catalog to find a good course in each of eight fundamental areas — and, if possible, do all this before you pick a major. As my old friend and fellow writer Rod Dreher once told me: "I wanted to be a journalist, so I majored in journalism. Working in newspapers later on, I figured out that everything I ever really used in the profession I learned in my first semester. The other three years of journalism classes were a total waste of time — when I could have been learning something solid, to give me something to write about." Myself, I taught my liver way too much about the many varieties of gin. There might have been better ways to spend my time.

If you complete this do-it-yourself core curriculum, you will gain an edge in all your upper-level classes. You will be replicating, as best we can today, the education that informed America's founders. Most importantly, you'll deepen your understanding and appreciation for your Faith. So sign up for a course in each of the following:

1. Classical literature in translation. Homer, Cicero, Caesar — the fun stuff that ends up in footnotes to all subsequent literature through the centuries.

2. Ancient philosophy. Plato, Aristotle, all the way up through Boethius. Lay down the intellectual bedrock before you start on the sheetrock.

3. The Bible. Be careful about the professor here. You want your beliefs deepened and questioned, not put through a Vita Mix.

4. Christian thought before 1500. Here is your chance to read Augustine and Aquinas for credit.

5. Modern political theory. Where we went wrong, starting with Hobbes, up through Rousseau, Marx and Mill. Make sure you bring along the antidotes, in the form of Burke, Pope Pius IX, and Adam Smith.

6. Shakespeare. Avoid classes that mention "race," "class," or "gender." They will just ruin the Bard for you. And don't be afraid to rent DVDs in addition to reading — the plays were meant to be seen.

7. U.S. history before 1865. Our nation wasn't founded at Woodstock, no matter what they teach in high school.

8. Nineteenth-century European intellectual history. Most of the madness we are still suffering through today — and you have just read fourteen essays that scratch the surface — is a dumbed-down version of nineteenth-century errors. Read the addled geniuses who inspired contemporary maniacs, and learn how to spot false premises in seconds, instead of decades.

All this might sound ambitious, but it really isn't. It will fulfill most of your school's distributional requirements in a worthy way, and won't interfere with completing a major. As Mark Henrie writes in his short, fascinating A Student's Guide to the Core Curriculum, such a program is what most of the G.I.s returning from World War II had to master. The guys who wrote the classic TV series and Hollywood movies were educated in this style — hence all the references in Bugs Bunny to Verdi and Wagner. That's why even the popular culture of previous decades stood at a much higher level than ... some of the textbooks you might be assigned in those pointless electives I am urging you to avoid. If you take the time to explore each of these intellectual areas, you are almost guaranteed to write smarter papers in your junior and senior seminars, do better applying to jobs or graduate school, and emerge as a sounder apologist for your Faith.

Seeking wisdom, you might wish to supplement the Great Books you will work through as part of your personal core curriculum with certain lesser known classics — for instance, the books you will find in the Recommended Reading section at the end of each essay here. You might find that some of those authors become your favorite writers, and form the basis for your research papers or your senior "capstone" project, if your school requires one. More importantly, these books — mostly by authors that modern academics long ago stopped reading — will set you free from the toxic intellectual trends that turn so many students into sheep.

Finally, on top of these classes and reading, it is critical to make friends who are open-minded and sympathetic. You needn't, and probably shouldn't, spend all your time with fellow believers. But most of us need at least some kind of support group with whom we can talk about doubts and difficulties. Beyond that, don't be afraid to mix it up intellectually with people whose ideas you find obnoxious. In my college years, the debating group where I spent most of my time — Yale's Party of the Right — was deeply divided between secular libertarians and orthodox Catholics. I learned a lot more countering, point by point, the tortuous arguments of programmatic atheists than I would have nodding cozily over cigars with the guys from the Latin Mass choir. I heartily recommend forming a reading group with folks who don't share all your premises, and honing your debating skills over lattes late into the night. You will be middle-aged, as I am, soon enough. You will have all your forties and fifties when you can catch up on your sleep.