March 14, 2011
My Catholic readers might appreciate the "Litany for Japan"; click here to read (and pray) it.

'Some of you were personally acquainted with Father Ragheed Ganni (1972-2007), the Iraqi Chaldean priest who was murdered outside his church in Mosul, with three deacons, after being asked if he would renounce his faith. 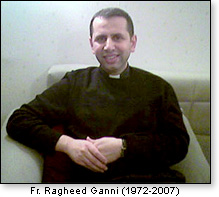 'Now there is a website established to obtain testimonies about him. I was on the telephone yesterday to a friend, a parish housekeeper in Perth, who looked after him for about a week when he was visiting Australia. (He has a sister who lives in Sydney as well.) She was full of stories about the humility and kindness of this man, and also how he sensed that somehow this would be his destiny.

'It makes me wonder when God asks a person the supreme sacrifice of offering his or her life for Him, whether this invitation is actually given some time before the event itself. Hence the person who has said 'yes' knows his or her fate and acquires a serenity that seems somewhat other-worldly. Father Ganni constantly said that he wished to return to Iraq; he studied at the Irish College in Rome and had assignments in Ireland — where he was very popular — and in Sweden. But he knew he would likely be killed, and that is what happened. Still, he was always very joyful and serene.

'The Church so often says it must rewrite the martyrologies, and Father Ganni and Pakistani minister Shahbaz Bhatti are two marvelous contemporary witnesses to our Catholic faith. Let us all be inspired by their example.'

On the subject of Muslim barbarism, Bill Donohue of the Catholic League hits the nail on the head in the following news release, dated March 10, 2011:

'The Archbishop of Canterbury says that Shahbaz Bhatti, Pakistan's Minister for Minorities, who was killed for protesting the nation's blasphemy laws, died 'not simply for his Christian faith, but for a vision shared between Pakistani Christians and Muslims.' Indeed, he says that Bhatti's 'courage and steadfastness of purpose was nourished in the political culture of Pakistan,' and that only a 'faction in Pakistan' supports injustice. What is needed, he adds, is 'a rational debate in Pakistan' about the blasphemy laws.

'Bhatti was murdered for the same reason another Pakistani government official was, Salman Taseer: They protested the invocation of the blasphemy law that sentenced Aasiya Bibi to death. Bhatti's fight for justice had nothing to do with the 'political culture of Pakistan' — it was a reflection of his devout Catholicism.

'It is precisely the political culture of Islamism that is the problem, not some faction. Here's the proof: In a major survey published by the Pew Research Center, over 80 percent of Muslims in Pakistan favor stoning people who commit adultery and say the proper punishment for theft is whipping and cutting off of hands. Most important, 76 percent favor the death penalty for Muslims who convert. Moreover, it is ludicrous to say 'a rational debate' about the blasphemy laws should take place: Bhatti and Taseer were murdered for discussing it! And now Sherry Rehman, a member of the ruling party in Pakistan, was forced to withdraw her bill to amend the law. One wonders what planet Williams is from.

'Not until Muslims renounce the sharia — the totalitarian legal system that justifies oppression — will Christians be safe in Muslim-run nations. We're not talking about a fringe group of fanatics; we're talking about a large swath of the Muslim population. See the section on our website, 'Christian Persecution,' for recent stories of Muslim barbarism.'

"Sharing the Gospel with Muslims"