April 2, 2011
Below is an edited e-mail in response to my April 1 column on hospice care. It's followed by a response from Ron Panzer, president of the strongly pro-life Hospice Patients Alliance.

'I read SpiritDaily.com every day, which linked to your April 1 column. I'm also a hospice RN who's concerned about the blanket accusations and negative stereotypical image given of hospice care. I'm aware there are unethical doctors practicing who have a feeling of power over the life and death of their patients and can abuse that trust.

'Hospice is a benefit that, unless you are unable to make your own decisions and have a medical power of attorney, you need to be alert and aware that your condition is terminal and are refusing further treatment and electing comfort care only. You are not trapped in hospice. A patient can leave hospice and revoke our services without difficulty. As a practicing pro-life Catholic, I can confirm that at my hospice, we do not withhold food and water or medications such as Coumadin that are prescribed by the patient's primary care physician. 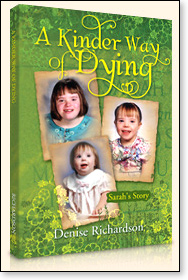 'I have grown attached to many of my home-based hospice patients and would never allow that to happen. What can happen, toward the natural end of a person's life, when they are considered to be 'actively dying,' they have no real desire to eat. As the body begins to shut down, you begin to lose the function of your reflexes, such as gagging and swallowing. Some patients without a gag reflex are in danger of choking or aspiration of food into their lungs, causing oxygen deprivation and pneumonia. These are preventable complications.

'As our patients decline, we do whatever is necessary to adapt to that situation, such as a soft, thickened liquid or pureed diet. At no point do we refuse food and water. My patients are sipping liquids until they are unable to swallow. That is the point where your body really doesn't need food, so mouth care and drops of liquid placed on the tongue give some hydration and keeps the patient's mouth moist. Most of my patients have ceased to breathe peacefully, surrounded by family members, when giving the same care I have just described.

'A few have experienced a sudden dramatic decline in their condition that places stress on all involved. The family has to weigh how far along in the dying process the patient is at and allow the staff time to get the patient's needs addressed, as opposed to calling 911 and taking the patient to the E.R. where they may end up dying. Our hospice goal is to keep people at home, safe, comfortable and pain free as long as God wants them to be here on earth. My patients have taken trips to other states to visit family, as they know they have a terminal diagnosis. We provide whatever is needed medically for them to enjoy that time, whether it's medication or medical equipment.

'Coumadin is a treatment medication to prevent blood clots. You can reach a point in a patient's declining condition where the patient's doctor may decide that the risk of developing a clot is lower if the patient is not very physically active or is bed bound than the greater risk of the patient aspirating pills he or she cannot swallow. Unnecessary oral pill form medications are often discontinued at this point.

'I felt the need to respond to this column because I'm afraid the hospice situation described could frighten patients and families away from receiving services that benefit both. I'd like to add that hospice care also involves scheduled chaplain and social worker services, and they're actively involved if an ethical issue should arise.

'I'd like to close by saying that I have also been on the receiving side of hospice care, when my 16-year-old daughter died of cancer. It was a positive experience that helped give our family assistance, support and closure.'

[Ms. Richardson wrote a book about her daughter's illness and death. Visit www.akinderwayofdying.com.]

'First of all, let me say 'Thank you!' for all the good work you do to serve your patients. Remaining committed to the pro-life mission of hospice as envisioned by Dame Cicely Saunders is what the public expects, and you are delivering it.

'In the situation described [in the April 1 column], the nurse is not unaware of the proper uses of Coumadin or hospice services at all. Though you practice with integrity, it is not always the same at other hospices around the country. You may not be aware that the National Hospice and Palliative Care Organization is the successor organization to the Euthanasia Society of America (through Society for the Right to Die, Choice in Dying, Last Acts, Last Acts Partnership and then in 2004, 'Caring Connections' of the NHPCO.)

'Those of us who care deeply about the hospice mission are appalled, not by what Wendy Ludwig writes, but that it is true. I've received complaints from doctors, nurses, professors of palliative care and others, as well as confirmation from leading hospice physicians, for over a decade, that these things are true. We know that some hospice agencies are training their staff to do 'third-way' killings through misuse of terminal sedation (when the patient is not agitated, psychotic or restless at all, or in pain) or through outright morphine overdose.

'Because of such problems, some hospice leaders are forming a new hospice organization that would unite the pro-life hospice agencies, staff and lay people together to promote the vision you support, a Hospice Life Association of America. Would you and your hospice agency be interested in joining others who are pro-life and committed to the same vision? Only when the mission you treasure is actively promoted nationwide will such horror stories become a thing of the past.'