Matt C. Abbott
'Under the Weight'

April 12, 2011
The following is a Christian poem composed by a friend of mine, L.A. Sniegowski.

Under the weight
of that heavy bright star
into a crystal midnight blue
did Innocence come
and lay under the golden hollow straws
in piercing cold, in a mammal's trough,
for my sake, for yours 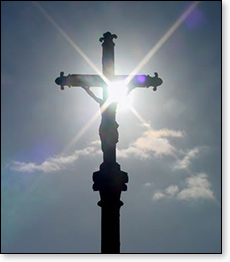 Under the weight of temptation
did He wander in the desert
denying sustenance,
refusing all that would refresh
allowing Himself to be put to the test
for my sake, for yours

Under the weight of repugnant sin
did His heart barely beat
on that lonely Thursday eve
there did He kneel beside that rock;
and glistening in the moonlight,
those red drops fell
for my sake, for yours

Under the weight of crushing cruelty
did He endure that scourging —
with every throw of the whip
the pain renewed —
and the back that reclined at Joseph's table
became one wound
for my sake, for yours

Under the weight of mockery
did those torturous thorns pierce Him
amidst the soldiers' laughter —
reed blows — the insults of the crowd —
the sweet head that once lay on Mary's lap
succumbed to the barbarous crown
for my sake, for yours

Under the weight —
the impossible weight — of the sins of men
through jeers and scorn
did He carry that cross
with ringing in His precious ears
and pain on every side
He did not quit, but carried on
a sacrifice to turn the tide
for my sake, for yours

Under the weight
of the mallet's blow
were those healing hands nailed
to that scandalous tree —
and the blessed feet
that walked upon the waves
were drowned in blood
for my sake, for yours

Under the weight
of a massive stone
concealed in a cave,
all breath gone forth;
all lifeblood rung out
His lifeless body lay
in coldness, in stillness
for my sake, for yours

But Lo!
in the newness of Sunday morn
in the brilliant dazzling white
the weight is lifted;
the stone rolled away —
He is risen!
For my sake! For yours!

November 8, 2019
'Infiltration and the election of Pope Francis'