Matt C. Abbott
The priest who got away with (financing) murder

What's even more disturbing: "The archdiocese also claims that it has support for its decision from the Vatican's Congregation for the Doctrine of the Faith, which it says ruled in favor of the priest in 2009."

Pousa, who has essentially boasted about financing the abortions (as well as blessing homosexual unions and calling for women's ordination), "claims that the girls whose abortions he financed would have killed their unborn children anyway, so he decided to 'commit a lesser evil to avoid another greater (evil)' and ensure that the abortion would be done in safety. A similar argument is made by Planned Parenthood to justify the legalization of abortion worldwide."

Absolutely appalling. Not only did Pousa provide the means for the girls to have their unborn children killed, he also put the physical, psychological and spiritual well-being of the girls in grave danger. And what if the girls were in abusive situations? Could Pousa be guilty of covering up criminal activity? (Where have we heard that before? Hmmm...)

'According to the law of the Church, canon 1398, anyone 'who actually procures an abortion incurs a latae sententiae (automatic) excommunication.' Pope John Paul II added that 'The excommunication applies to all of those who commit this crime knowing the penalty, including those accomplices without whose cooperation the crime would not have been produced,' in his encyclical letter 'The Gospel of Life,' in 1995.

'However, the tribunal assigned to examine the case concluded 'with the proper certainty' that 'the aforesaid priest has not incurred the penalty of excommunication latae sententiae established by canon 1398, for not having been in agreement with the intention of procuring the abortion and for not having a principal complicity in the abortions, which were completely decided upon and brought about by two girls in a very precarious economic situation,' according to the archdiocese....'

Thus, Pousa will remain in active ministry to promote further scandal to nourish the faithful.

Canon lawyer Edward Peters posted the following comment in response to the story:

'Based on what is publicly known about this case (as opposed to what people might think they know) there is not enough information to conclude either that CDF/Barcelona were wrong or that they were right. There are certainly scenarios that would support the canonical results in this case. I suggest that people be moderate in asserting their disagreement with the results. For the rest, Father Pousa's behavior is eventually going to catch up with him, in my opinion.'

I asked a trusted source about this whole sordid mess; he responded (edited):

'[Dr. Peters is] right, in a sense, that there is a strict basis for the ruling, since Pousa's reasoning was that he was helping the girls to pay for a 'safe' version of what they would have already gotten anyway. Therefore his financial aid did not cause the deaths per se and they were an attempt to avoid a lesser evil — by his reasoning. 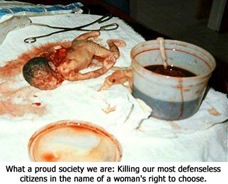 'However, the whole thing strikes me as an outrage. The reasoning for giving the money seems very specious. Obviously by giving it he was ensuring the abortions would happen. He presumably could have told the girls that they would be [killing their unborn children] and urged them not to do it, prayed for them, and so on.

'Legal, private abortions aren't necessarily much safer, so was Pousa really helping to protect the girls' lives? Was he not misleading them into thinking their actions weren't really that serious? Should the Catholic Church set up an abortion fund for women in similar situations, since apparently the behavior of this priest is legit in the minds of the authorities?

'And what about his other outrageous behavior, including the 'blessing' of homosexual unions and the endorsement of priestesses? There wasn't even a trial for that. Apparently endorsing sexual perversion and denial of Church doctrine aren't enough to merit action on the part of the bishop or the Vatican. It's yet another disaster on the sinking ship of Vatican II.'

Again, I will say: Welcome to the new springtime, ladies and gentlemen.