May 17, 2011
For good spiritual reading, my favorite (still living) priest-author is Father Benedict Groeschel, whose gentle orthodoxy and sound psychology are both edifying and comforting, especially for a "noisy soul" like myself.

Mark Brumley, CEO of Ignatius Press, has graciously allowed me to reprint a substantial excerpt from Father Groeschel's book Arise from Darkness: What to Do When Life Doesn't Make Sense, which, in the words of Catholic scholar Peter Kreeft, is "the kind of wise guidance we have come to expect from Father Groeschel. It is clear, simple, compassionate, personal, practical, Christ-centered and full of Gospel quotes that come alive in Groeschel's hands."

Written with a touch of humor as well.

Arise from Darkness can be purchased by clicking here. 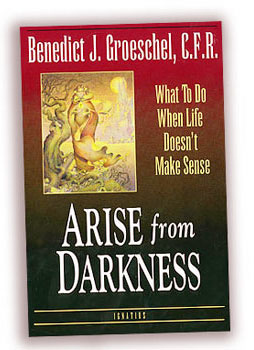 Despite the reassurances that faith gives us and that our Divine Savior gave to the apostles, death remains an awesome event. It's frightening. I have dear friends here in New York, the Dominican Sisters of Hawthorne, who literally live with death. Their community takes care only of people who are dying of cancer, especially poor people who can't pay. Think of it. If you teach school, your students are going to live on after you go, and, you hope, some of them will remember something you taught. For these sisters, the final success in their apostolate is to see a person die a peaceful and even holy death. This is a marvelous vocation, but extremely challenging because, even for these sisters, death is a robber of the people they have come to know and work with. However, if one visits one of their several homes for the dying, one would not come away with a terrible fear of death, the sisters constantly have to face the same questions that you and I face: Why? Why does a young mother die of cancer? Why does a good person who has lived a helpful life need to die so painfully?

This leads all of us to the awesome questions of death. Death frequently comes in a terrible way, utterly unforeseen and to those who are completely innocent. When I was first writing this series, a truck driver delivering a huge tank of gasoline went into a railroad crossing and found a traffic jam in front of him. Suddenly the bell began to ring, warning him that a train was coming. He couldn't get the truck off the tracks fast enough. He tried to back up, at the gates came down on top of his truck. The engineer saw him and through the engines into reverse, but the train could not be stopped that quickly and hit the gasoline truck at forty-five miles an hour. The driver was burned to death along with five other people waiting at the crossing. One elderly man was blown out of his car and found himself running down the street, his clothes aflame; but his dear wife never got out of the car. Why? I don't know.

Death confronts us with the mysterious element in life. In contemporary society, we deny the existence of the mysterious. Many things are mysterious — life, love, darkness — but what is more mysterious than eternity? If you can't cope with mystery, this life is going to drive you mad or make you cynical or terribly depressed. Life is filled with many unanswered questions. To be honest, if we did not seek answers to these questions, we'd all be sheep. Mystery gives suffering humanity its greatest dignity. Death brings us directly into an unavoidable confrontation with the mysteriousness of life. This is true whether death is expected or sudden, whether it is the welcomed death of a very ill person who longs to go home or whether it is seen as the worst possible thing — the sickness of a small child or a person who has life in front of him.

When death arrives it is usually as a mystery. But what do we do in the case of this mystery? People of every religion and people in the world, every racial group, every culture — what do they do when death comes? They pray. Even unbelievers pray. They may never pray at any other time, but they pray in the presence of death, because death is what gives life some dimensions, its mystery and its meaning. Death is the frame around life. As we make our way through life we need to learn the lessons that death can teach us. For the Christian, the approach of death has a great message: Jesus Christ identified himself with us to such an extent that he was willing not only to die, but to endure a terrible and painful death....

Recently a man walked up to me after a conference and whispered, "My wife doesn't know this, but I'm dying of cancer." I replied, "I'm dying of life, so let's pray for each other." We've all got a terminal illness. It's called life.

Death looms before us like a great door. It is awesome because it is larger than any other reality we ever face. It sums up all that has been and brings to an end all that might be yet to happen. It is a great and silent door. But for the person of faith, it becomes an inviting mystery. In the course of the years one becomes weary of conflict and sorrow. One longs for the fulfillment of the most profound needs of the human heart — for peace from conflict within and without, for a place free of danger and disappointment, for relationships untroubled by change and unmarred by selfishness.

One longs to see, at last, the beauty of God, which is summoned us throughout life, shining out here and there. The words of the song take on a poignant meaning as one gets older, "I have loved, old Lord, the beauty of thy house and the place where thy glory dwells" (Ps 26:8). One desires to embrace again loved ones gone long ago — from childhood and adolescence. Death becomes a possibility of going home to our Father's house. For the believer, it begins to lose the bitterness and staying that St. Paul spoke about and begins faintly to resemble what death was supposed to be before the Fall, a passing on to a far better place, a coming home after a long journey....

This is something to think about when you go to a funeral. You look at the body and you say, "Where is your soul?" Perhaps the deceased has entered, like the saints, immediately into his place forever — remember, one must be completely innocent and utterly pure to go to that place of absolute innocence and purity. That's why, if you're planning on missing Purgatory, you may be in for a disappointment. We do strive to accept salvation completely while we are on earth, but most of us have never opened our hearts completely to it. This is what happens in Purgatory. God doesn't change while we're in Purgatory. We change.

"The Church of Latter Day Sinners"