June 14, 2011
I firmly believe that living as a true Christian is the toughest vocation of all.

Mrs. Mac was a kind and generous black lady who lived for over fifty years in the same apartment in Harlem. In her younger days, she and her husband Jimmy would organize baseball leagues for the neighborhood children who had little else to do. Some of the players from the New York Giants helped them by rounding up free tickets and used sports equipment. These professional athletes, heroes in the children's eyes, even showed up occasionally for local events.

In addition to taking wonderful care of her family, Mrs. Mac cared without compensation for several foster children. In many ways, she took a concern for all the residents in her apartment building. This loving woman seemed to have a healing presence; she made hurting people feel better just by talking to them.

After the long and painful death of her husband, Mrs. Mac decided to refurbish her apartment with a fresh coat of paint and some new furniture. The cost in those days came to about twelve hundred dollars — a sum Mrs. Mac didn't have. But her friend, Rosita, who was a Catholic, suggested that she make a novena, nine days of prayer in honor of the Blessed Mother of Jesus. Even though she was a Protestant, Mrs. Mac agreed. 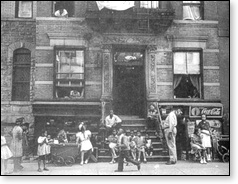 On the ninth evening, this dear woman dreamed that she looked out her window and saw Jimmy coming down the street. He called up to the fifth floor: "Hey, Maw, the number, the number." Upon awakening, Mrs. Mac recalled that her husband had often placed a two-dollar bet with the local bookie on numbers four, five, and six. Never a gambler herself, Mrs. Mac took the hint and nonetheless and sent a youngster around the corner to place her bet. Her winnings that day they came to exactly twelve hundred dollars.

After a period of instruction, I received Mrs. Mac into the Catholic Church. This turning point was important but did not change her life in an obvious way. With very little formal teaching, she had followed the law of the Spirit of life in Christ, written in her heart over many years (Rom 8:2).