June 19, 2011
The man formerly known as Father John Corapi, celebrity Catholic priest, is "not going to be involved in public ministry as a priest any longer" and now wants to be known as John Corapi, "The Black Sheep Dog." Click here to read, or listen to, his stunning announcement. 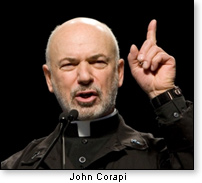 For now, I will just say that I find his announcement perplexing and disappointing given what he has been: a charismatic priest whose words have echoed in, and have influenced, the minds and hearts of many faithful Catholics. But perhaps "The Black Sheep Dog" persona — which, in all honesty, I find a bit creepy — has been in the works for longer than we'd like to think. Obviously this wasn't a decision Corapi made overnight.

Believe me, I sympathize with those who suffer persecution, or who experience a crisis of faith as I have experienced in recent (and past) times. That said, is Corapi truly a victim of an injustice perpetrated by Church officials? Hopefully not, but I would like to see his superiors issue a response to his announcement. Not that it will necessarily change many minds, but I think it's important for Church officials to respond in this situation.

As for reactions to Corapi's announcement, besides those in the Catholic blogosphere, Father Richard Perozich of the Diocese of San Diego said in an email: "Without the ability to identify and function as a Roman Catholic priest, John Corapi's fire and spirit will not have the same effect it did with the authority and faculties of Holy Orders."

And from another individual: "[Corapi's announcement] has the potential of encouraging people to leave the Church."

Still, if our main focus is on Our Lord Jesus Christ — and it should be — leaving the Church simply isn't an option, despite all the corruption.

To use the same quote from Father Benedict Groeschel that began my June 14 column: I firmly believe that living as a true Christian is the toughest vocation of all.