June 21, 2011
In my April 10, 2010 column, I reprinted a reflection about a relatively obscure and faithful Catholic priest in Broadus, Montana by the name of Chester Poppa. Father Poppa died recently of natural causes, and below is the text of the homily of his funeral Mass, which was celebrated by Father John Celichowski, OFM Cap.

Homily for the Funeral of Chester Poppa, OFM Cap.
June 20, 2011
St. David Parish, Broadus, Montana
Wisdom 3: 1-6, 9; Psalm 23; Romans 6:3-9; John 12:23-26
When a person is in end-stage renal failure and has lost 85 to 90 percent of his kidney function, he has three choices: get a kidney transplant, undergo kidney dialysis for the rest of his life, or die. Several years ago our brother Chester faced those choices. As we all know, he chose dialysis — three days a week.

Undergoing dialysis can be a strain under any circumstances, but doing so in your late 70s and early 80s and three times a week ... that's a lot to deal with. When Randolph Graczyk and I visited Chet at his apartment in Billings last month, he admitted that the process was taking its toll on him. It often left him without much energy to do much else.

Yet for several years, Chester was not only faithful to his course of treatment, he was equally faithful to his ministry here at St. David's. Each week, after undergoing dialysis on Monday, Wednesday, and Friday, he would make the three-hour drive from Billings to Broadus for the weekend Masses. It was his way of remaining faithful to a community he would serve as pastor for 35 years. It's amazing and humbling for me to consider that he began his ministry in Broadus when I was only an eighth grader at Ss. Peter & Paul School in Milwaukee and just beginning to learn about this order of priests and brothers called the Capuchins.

Dialysis keeps the kidneys and the whole body in balance by removing the things that aren't needed — waste, salt, and excess water. It helps to maintain a proper balance of the electrolytes needed to keep the heart and other muscles working well, and it helps to control blood pressure. It's not a particularly glamorous or dramatic procedure, but it works.

In his life as a friar and his ministry as a priest, Chester Poppa was a form of dialysis for those he served: not very complicated but very effective. Like any good pastor, he was able to keep the portion of the body of Christ he was called to serve in balance. Through his kindness, simplicity, and honesty he was able to remove the things that could be harmful or weren't needed.

But in recent years, perhaps it was his dogged dedication to his ministry here that left the biggest impression. It would be hard for any priest to commute six hours every weekend to have Mass for a small parish; it would be harder still for him to do it after three days of medical treatments that sometimes left him feeling sick or exhausted; and it seems almost impossible to imagine how someone in his ninth decade of life could manage it. But our brother Chet Poppa did it week after week, month after month, without complaint or a trace of self-pity. 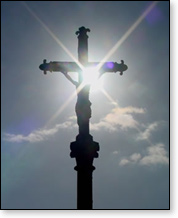 Our gospel reading provides a clue. Chester, I think, understood himself and his ministry as seeds: pretty plain, working largely out of the limelight of our province or this diocese, and yet with the help of other powers beyond his own — soil, water, light, warmth — able to produce something beautiful and able to nourish others. Five of his own students now minister as priests in Montana.

The soil was the richness of his Catholic faith and the Franciscan tradition that he especially exemplified in his simple lifestyle and his commitment to Francis' exhortation to "Preach the gospel at all times and, if necessary, use words."

The water was his baptism, the source of our common priesthood as believers in Christ and the well from which he drew out his vocation to serve God and the church as a Capuchin friar and a priest.

The light was the word of God, which he not only preached but also prayed through his celebrations of the sacraments and the Liturgy of the Hours. When Randolph Graczyk and I went to visit Chet at his apartment in Billings just three weeks ago, one of the things I couldn't help but notice was the Breviary on his kitchen table, open and ready for him to begin Evening Prayer after we left.

The warmth...well, the warmth came from within Chester. One could even say that it was part of his character. In January 1945, Gerald Walker, the rector of St. Lawrence Seminary High School, wrote a letter to the Provincial Minister, Clement Neubauer, recommending Chester for admission to our novitiate. Describing Robert (Chet's baptismal name) Father Gerald noted:

....Time after time he has received the unanimous special commendation of the faculty for his conduct, order and application. And this commendation has not been a pleasure to him, because he is so sincere in considering himself very small and unworthy. He is not a lumen in talents, and yet his report card is straight 'A' or very close to it. That is the result of honest and constant application.

By nature he is inclined to be quiet and serious, but one cannot help but deeply admire how among the students he tries to be all to all, making a positive effort to adapt his feelings and thoughts to this one and that one, as he happens to be with one or the other. He tries so hard to be pleasant and kind; and the boys recognize that and appreciate it....

Over 65 years later, I suspect that people would have been able to say much the same thing about our brother. He never forgot that he was a seed. He was not afraid to die to himself. He now leaves behind the fruit of a faithful life. +