July 18, 2011
Many Catholics have heard by now that certain changes will be instituted later this year in the ordinary form of the Mass. Pastors across the country may want to provide their parishioners with Dr. Edward Sri's A Guide to the New Translation of The Mass, a "low-cost [$1.95], handy question-and-answer booklet [that] addresses the important changes taking place in the Liturgy. The new responses of the Mass are laid out in an easy-to-follow format, while questions about the reasons for the changes and the effect they will have are answered and explained. Included is an invaluable tear-out pew card that details the old vs. the new prayers and responses for the laity."

Below is an excerpt from the booklet, which can be ordered at GuidetotheMass.com. Thanks to Matthew Pinto of Ascension Press for allowing me to reprint this material.

Introduction
"Do this in memory of me." These remarkable words were spoken by Jesus nearly 2,000 years ago when he instituted the Eucharist at the Last Supper. The Church fulfills this command of the Lord whenever we celebrate the Mass. In doing so, we participate in the supreme mystery of our faith, the memorial of Christ's passion, death, and resurrection. 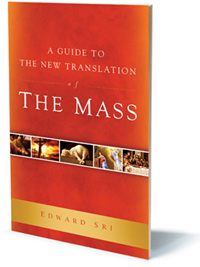 The way in which the Mass is celebrated has undergone various changes throughout the centuries, but the heart of the liturgy has remained the same. It continues to be a celebration of the banquet of the Lord, in which Catholics come to hear the word of God in the Scriptures and receive the body and blood of Christ in the Eucharist. As we prepare to welcome the revised English translation of the Mass, we can be assured that the Eucharist we celebrate will stand in continuity with that first Eucharist instituted by Christ — and that the new translation is intended to help enhance our worship of God and deepen our participation in the sacred mysteries of the liturgy.

This booklet seeks to explain why the new translation of the Mass is being issued and how it will affect the various parts of the Mass. It will also consider the meaning of some of the more noticeable changes and how they will assist our worship. It is my prayer that this booklet will help you develop not only a greater awareness of the upcoming changes in the translation of the Mass, but also a deeper appreciation for the Liturgy itself and a deeper love for Jesus in the Eucharist.


Questions and Answers
1. Is the Mass changing?

The essence of the Mass is not changing, but the way it is celebrated will be noticeably different. While the structure and order of the Mass will remain the same, many of the prayers and responses of the liturgy have been newly translated into English from the original Latin text. In addition, new observances for recently canonized saints, additional prefaces for the Eucharistic prayers, additional Masses for various needs and intentions, and updated instructions for the overall celebration of the Mass will be added. The most significant change people will notice, however, is the new translation of the actual words of the Mass.

2. So the Mass we celebrate in English is a translation from the Latin?

Yes. In the Roman rite of the Church, the Mass was celebrated in Latin for centuries. After the Second Vatican Council in the 1960s, the prayers of the liturgy were translated into the vernacular (or "common") language of a given country to encourage more active participation by the people. The official Latin text of the Mass is contained in a book known as the Roman Missal or Missale Romanum (from the Latin word missalis, meaning "pertaining to the Mass"). This is the foundational text from which bishops around the world commission translations of the Mass into local languages.

3. How significant will the changes in the Mass parts be?

The new translation will bring about the most significant change in the way most English-speaking Catholics participate in the Mass since the years following the Second Vatican Council (1962-1965), when the liturgical texts were translated into English and officially used in worship for the first time. When the new translation is implemented, we will see how almost all of the prayers have been affected by it. The basic structure of the prayers will for the most part remain the same, but the change in wording at many points throughout the liturgy will be quite noticeable. For a time, most Catholics will no longer be able to walk into church on Sunday and automatically recite the Gloria, the Creed, and other Mass parts by memory. They will need a guide to help them become accustomed to the new translation of these prayers.

4. Why do we need a new translation?

When the Second Vatican Council allowed for "a more extended use of the mother tongue within the Mass" (Sacrosanctum Concilium, no. 53), various groups worked quickly to develop an official English translation to be used for the first time in worship, and a full English missal was published in 1973. The approach to translation used at that time (known as "dynamic equivalence") aimed at communicating the general meaning of the Latin text of the Mass, rather than providing a literal, or word-for-word, translation.

After forty years of celebrating Mass in English, the Church has come to see certain areas where the English text could be improved. Some have noted that, when the Latin text was paraphrased, a number of rich spiritual metaphors and images were lost. Important theological concepts were not always clear, and several biblical allusions did not shine out as noticeably as they could.

In 2001, the Vatican called for a more precise translation that gives Catholics a better sense of the richness of the Latin text — a translation that would be "without omissions or additions in terms of their content, without paraphrases or glosses" (Liturgiam Authenticam, no. 20). Following this approach, the new translation of the Mass preserves more fully the theological tradition captured throughout the centuries in the liturgy. It also more clearly communicates the many biblical allusions and vital theological concepts that are expressed in the Latin original....

The booklet also explains the changes in the following parts of the Mass: the greeting, the Confiteor, the Gloria, the Creed, the Sanctus, and Ecce Agnus Dei.