Matt C. Abbott
Of abortion images and the 'third path' to hell

'One of the CPLS summer projects was the design and organization of the website www.imagesofabortion.com. Our goal is to provide a pro-life resource focused exclusively on abortion victim photography. Very few websites are dedicated strictly to making these images available to the pro-life community. Our hope is that pro-lifers will take advantage of the website. Also available are several videos that reveal the truth about abortion. 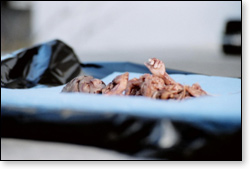 'You will find over 350 images. Some of them are the most recent photos taken of abortion victims in America — babies retrieved from the trash in the year 2010. Many photos are of unborn children killed in the seventh or eighth weeks of gestation, their humanity blatantly evident. These photos prove that unborn children at this stage are recognizably human — members of the human family who have a right to be protected! Photos on the site range from six weeks to seven months gestation.

'CPLS believes the actual reality of abortion, the use of images, has a vital role to play in the effort of the pro-life movement. I know from my own vast personal experience that photos of aborted babies have converted hearts and indeed saved other babies from abortion. We believe these photos honor the victims. These are the hidden victims of our national slaughter. All the babies in these photos were killed by abortion, retrieved from the dumpsters of clinics, and buried by CPLS between the years of 1987 to 2010. Each photo is accompanied with descriptive information.

'The photos can be made into large posters for demonstrations, used in videos, printed in brochures and pamphlets, used in school term papers, reports and projects, pro-life articles, postcards for mail inserts, and so on. All we ask is that photo credit be given to Citizens for a Pro-Life Society.'

'For those of you not able to attend the Third Annual Raleigh Life Conference, here is the link to Judie Brown's talk 'The Third Path to Hell or the Road to Christ.' This landmark talk is well worth watching.

Judie said we are watchmen when we listen to the truths. She said we are called to sow God's seeds and to speak out against this movement called the 'third path,' an international movement to fundamentally transform medicine. She explained that we are called upon to point out the gravity of the problem facing our vulnerable, elderly, seriously ill, those who require special care — people deemed to be dead weight and inconvenient for society.

'As serious as this problem is, she said, we will talk to people who have closed minds, or who are apathetic and don't want to know what the problem is because they might have to get involved, or those whose self-interests prohibit them from getting involved.

'Thank God, she said, that when we do speak in the defense of life we will also speak to people who want to understand. But the proponents of death are extremely clever in the way they choose their language. It's music to our ears to hear the loving things they have to say about the dying, even though there is evil in their hearts.

'Judie is exactly right in that the new palliative care is a lavish use of morphine and is also the withholding and withdrawing of life-sustaining treatment in so-called futile cases, based on a 'quality of life' index. LifeTree would like to emphasize that the number of people actually practicing old-fashioned palliative care is miniscule.

'George Soros-funded people have established the guidelines and regulations for palliative care as it is practiced today. They are the ones training and licensing the palliative care doctors, nurses, social workers and, yes, even the chaplains. They are stacking the deck against us, and most of us are unaware.

'For those of you going to hospitals and nursing homes with your loved ones, if the professionals say they are 'palliative care trained,' chances are they are not practicing the old-fashioned palliative care. George Soros' foundation and others are working to accelerate the implementation of the 'third path' through the machinery of Obamacare.'