October 23, 2011
Michael Tripoli, a Catholic, sent those on his email list (including yours truly) the following insightful comments (slightly edited) regarding the violent death of former Libyan leader Muammar Gaddafi:

'I do think Gaddafi deserved execution, but I prefer executions to be carried out in a way that upholds authentic justice and the human dignity of both the executioners and the person to be executed.

'Did the group killing Gaddafi seem like potential American allies? They were acting like savages, ripping off his wig and his clothing, kicking him, beating him with shoes, and shooting him, while screaming 'Allahu Akbar!' Driving Gaddafi's corpse around Misrata, displayed on the hood of a car, demonstrates a sort of barbarism that isn't inclined to representative democracy.

'Gaddafi was a crazy, evil man. In many ways, he very much resembled a movie villain; sometimes an unintentionally comical one. I believe he was the type of man who would have begged for mercy, and then, once mercy was shown, turn around and kill the ones who had shown him mercy at the first opportunity. 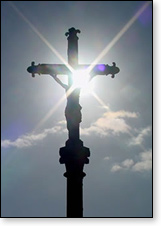 'Yet even knowing that, I had a visceral reaction to seeing another human being kicked, beaten and humiliated — even an arrogant, obnoxious, psychopathic, mass-murdering monster like Gaddafi. However terrible his last moments, if he did not repent, those last moments pale in comparison to what awaits him in eternity.

'Jesus was treated worse that Gaddafi, and He was not only innocent, but also the summit, source, and measure of all being, life, light, justice, truth, goodness, beauty, holiness, love, compassion, mercy, and benevolence!

'All of us have sinned, and most of us have deserved hell for some of our sins. Jesus lived a [sinless] life of virtue and holiness, showed compassion for the poor by caring for their needs, and worked miracles healing lepers and others who were sick, gave sight to the blind, made the lame walk, and raised people from the dead.

'Yet He was killed at the behest of an angry mob.

'Look at what becomes of human nature once God is rejected! That is why we must cling to God. Otherwise, we will succumb to the mob.'

I almost entirely agree with Michael. The only thing I'm not comfortable with is asserting that, had Gaddafi survived his capture, he still should be executed "in a way that upholds authentic justice and the human dignity of both the executioners and the person to be executed."

I understand what Michael is saying here, but despite the fact that capital punishment is not intrinsically immoral, it's extremely difficult for me to support it even in the case of Gaddafi. I guess I'm torn on this issue.

The Vatican released a statement saying, in part:

'The news of the death of Colonel Muammar Gaddafi marks the end of a much too long and tragic phase of a brutal struggle to bring down a harsh and oppressive regime.

'This dramatic event obliges us yet again to reflect on the immense toll of human suffering which accompanies the affirmation and collapse of any system which is not based on the respect and dignity of the human person, but rather on the prevailing affirmation of power.

'It is hoped now that the Libyan people might be spared further violence due to a spirit of revenge, and that the new leaders can undertake as soon possible efforts necessary for bringing peace and rebuilding in a spirit of solidarity, based on justice and the rule of law. May the international community also be committed to generously helping in the rebuilding of the nation.

'For its own part, the small Catholic community will continue to offer its own witness and service to all people, especially in the charitable and health fields. The Holy See will assist the Libyan people with the instruments available to it in the field of international relations with a spirit of promoting justice and peace....'

Click here to see the Vatican's statement in its entirety.