November 14, 2011
Below is the Preface to the book Praying with the Saints for the Holy Souls in Purgatory, authored by Susan Tassone, whose writings I highly recommend. The Preface is written by Cardinal Ivan Dias, prefect of the Vatican Congregation for the Evangelization of Peoples. Many thanks to Ms. Tassone and Our Sunday Visitor for allowing me to reprint this excerpt. To order a copy of the book, click here. 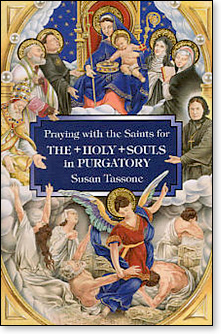 All down the centuries, the Catholic Church, true to her belief in the Communion of Saints which she professes and the Apostles' Creed, has urged the faithful to pray fervently for the souls of their deceased brethren in purgatory. They are often called "poor souls" because they cannot help themselves, depending fully on our prayers to be able to cleanse themselves of the residue of their sinful past and enter into God's beatific presence to become our grateful intercessors before his heavenly throne. Among these we must mention those who have been long forgotten by their relatives and friends on earth: we call them the "abandoned souls in purgatory."

Over the years, Susan Tassone has been tirelessly writing and teaching about this revered tradition of praying for the holy souls in purgatory. Her meticulous research and attention to both historical and spiritual detail has helped many to understand more deeply the value of the singular devotion and selfless way of prayer. In her latest book, Praying with the Saints for the Holy Souls in Purgatory, she has brought a whole new dimension to this devotion, seeing it through the spiritual writings and tradition of saints throughout the centuries. The book presents the writings and spiritual legacy of saints from all corners of the world and through all ages, thus demonstrating the universal interest in praying, with and through the saints, for the holy souls.

Susan's singular crusade has letter compassionate hearts to add a missionary dimension to her special ministry, a dimension that envisages using the devotion to give tangible support to priests in areas where the faithful are unfamiliar with or unable to offer Mass intentions in support of their pastors. This ministry consists of collecting Mass intentions, or stipends, for the poor souls in purgatory, and then allocating these funds for the needs of priests toiling hard in the missions throughout the world. The generosity of so many who have been deeply touched by this ministry in favor of the holy souls has thus provided in new means of sustenance to many priests in mission territories. Among these are retired diocesan and religious priests, seminary professors, members of missionary monastic communities, and priests living in remote difficult areas and poor village parishes lost in some faraway forest or jungle.

Thanks to these untiring efforts, assistance is gone out through cardinals, apostolic nuncios, archbishops, and bishops to help support diocesan missionary clergy who gratefully fulfill the obligations of offering Masses for the poor souls, and who also invoke God's special blessings and protection on the donors of the Mass stipends.

In combining the devotion to the holy souls with support for mission personnel, Susan sets a wonderful example of lay collaboration in the Church's evangelizing mission. For it encourages a lay participation in missionary endeavors that goes beyond territorial borders and cultures, and which also brings together men and women of all parts of the world and a chorus of praise, prayer, and thanksgiving for the salvation of those who have "gone before us marked with the sign of faith" (Eucharistic Prayer I).

It is a distinct privilege for me to present Susan Tassone's latest work on the writings and devotion of saints throughout the ages to the souls in purgatory. I would like to add a special word of thanks on behalf of the missions throughout the world, because she has given her very laudable ministry a powerful missionary thrust. May the chapters and practical suggestions for daily and seasonal prayers made in this book lead to an ever wider and deeper appreciation of the precious devotion to the holy souls in purgatory.