November 21, 2011
The following is an edited version of an article from a recent issue of The Remnant Catholic newspaper. Many thanks to Remnant editor Michael J. Matt for allowing me to reprint this material. Click here for subscription information.

By Anthony Gutierrez
Remnant Editor's Note: Anyone who has traveled to Mexico in recent years (or for that matter to certain parts of the south-western U.S.), is aware of the rapid expansion of the cult of Santa Muerte — a strange mix of Christianity and the occult, which, according to Wikipedia, is "probably a syncretism between Mesoamerican and Catholic beliefs." The name literally translates to "Holy Death" or "Saint Death."

Trappings of the cult of the Santa Muerte appear everywhere in Mexico — gas stations, restaurants, tourist stops, souvenir shops. It is a skeletal figure, clad in a long robe and carrying usually a scythe and a globe. The cult of Santa Muerte dates back to at least the 1960s but was clandestine until recent years, when, according to experts, it went increasingly public, especially in Mexico City. The cult is condemned by the Catholic Church in Mexico but remains firmly entrenched among Mexico's lower and criminal classes. The number of believers in Santa Muerte has grown over the past 10 to 20 years to approximately two million followers and has crossed the border into Mexican American communities in the United States.

We're grateful to Anthony Gutierrez for offering the following Q&A tract for publication in The Remnant, which he wrote to, as he put it in a recent letter to us, "combat the mingling and confusion this cult is spreading among many young Hispanic Catholics." Michael J. Matt

What is the Santa Muerte?

The Santa Muerte is a fast-growing cult of Mexican/Latin American origin. This cult of religious devotion for a female grim reaper figure is usually depicted as a sacrilegious version of the Blessed Virgin Mary with a painted skull face. It's also depicted as a statue of a skeleton draped in red robes and a turquoise mantel. Mocking the icon of the Virgin of Guadalupe, it's surrounded not by bouquets of roses, but by money, wine, tobacco and food along with candles and other devotional items.

Where does the Sante Muerte come from?

Some insist the origin of the Santa Muerte is Mexico, but others claim it pre-dates Christianity and is connected to the Mayan/Aztec pagan pantheon that was revealed anew by a shaman of Veracruz, Mexico. Others claim the origin is Cuba, making its way into Mexico by way of those "holy men" and witch doctors of black magic whose adoration of the holy death stems from their African ancestors. Neither theory has been proven, but what is known is that Santa Muerte has become a powerful cult since the 1960s and is now connected to the subculture of Mexican folklore, myths, and a form of witchcraft called "brujeria." Brujeria comes complete with its own "ministers" (predominantly female) and various superstitions, rituals, monsters, and "patron" spirits. Because its practitioners do not seem to seek any spiritual enlightenment, but only simple favors and rewards, the cult of the Santa Muerte is probably best described as not so much a religion as an esoteric practice wrapped in the trappings of a religious movement.

How is Santa Muerte popularized?

The cult following of the Santa Muerte has been growing rapidly and under various titles such as sactissima, santa nina or blankita. It's very popular in the deadly subculture of drug cartels. The Santa Muerte is the "patron" of drug-smugglers, robbers, prostitutes and the purveyors of other criminal or "dubious activities." The Santa Muerte cult is anti-establishment and appears to glorify criminal behavior. Although not all members of the cult are criminals, all live an existence that is dominated by crime. The cult seems to be linked closely to prisons, prisoners, and family members of prisoners. It is also associated with at least two organized criminal groups: the Gulf Cartel and Mara Salvatrucha.

How is the Santa Muerte a "patron"?

Devotees of the Santa Muerte, before carrying out a "dubious activity," go to the council of a cullendera (witch doctor, sorcerer, and fortuneteller). Depending on various local customs, the ministers of the Santa Muerte, accepting an offering of money and usually giving a palm reading, ask a series of questions about the activity or favor being requested. Then the soothsayer will invoke a spirit (Santa Muerte) and determine an answer via the use of Tarot cards. The favors requested are usually for cures, love potions, or to know if one will be able to perform the "dubious activity" with safe passage. Offerings of incense symbolize prayers and promises made if the favor is granted.

This devotion may look in form similar to that of Christian-petitioning to the Communion of Saints, but it's distinctively different in matter and intention. An example is when a person asks (prays) to a Christian saint, the prayer, invocation, or supplication is made always to God in, with, and through Jesus Christ (1 Tim 2:15). All Christian supplications via the saints come with Church-approved devotions with the intent being the greater glory of God. The devotee of the Santa Muerte requests favors through the use of witchcraft (brujeria), which is ultimately from the devil because of the evil intent.

Why is Santa Muerte demonic?

[Because] the Santa Muerte is a) an image of blasphemy, b) appeals to the power of sorcery, c) petitions for assistance in the performance of illegal and immoral deeds. The cult is a mockery of Christianity and the intercession given by the Communion of Saints. This mockery could even be identified a neo-Iconoclasm, not so much through the actual breaking of images, but in the blasphemous distortion and improper use of the icons. Most poignant is the fact that there is no appeal toward virtue or morality. There is no ultimate conversion toward Jesus Christ. Thus, the Santa Muerte cult is a product of demonic influence leading souls to perdition.

What about its "power" to predict future events?

Any power to know future events outside of Jesus Christ is the work of demonic influence. It must be remembered that demons are fallen angelic beings that retain limited angelic powers. Examples of this limited power are oppression, obsession and even possession. Demonic spirits cannot truly heal or see future events. They can only manipulate events to assist in sinful behavior. The Catholic Church "is willing to admit that there are diabolical and evil forces in our world that can be invoked, yet the church rejects [all] occult practices as demeaning the omnipotence and omniscience of God." She "affirms that Jesus Christ is Lord over all these powers." Occultism is a mortal sin because these "practices interfere with the communication of God's grace and with our response to that grace; refusing to place total faith, confidence, and reliance on the One and Holy God, occultism places undue trust in those powers that have been subordinated to Christ."

How can the Santa Muerte be called demonic when the Catholic Church celebrates "El dia dela muerte"? 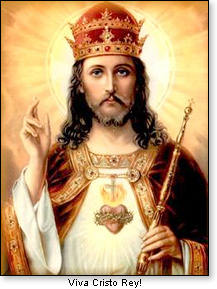 The cult of Santa Muerte is demonic for the reasons already given. The cult of Santa Muerte is essentially a form of witchcraft and has absolutely no relation to the Catholic religion of Jesus Christ. The Catholic Church does celebrate a second-class feast called All Souls Day, on which a Requiem Mass is celebrated for all the souls of the Christian faithful departed, particularly the souls in purgatory. On this day the Church calls for black vestments to recall the mortality of humanity, bringing to mind that one day we all will meet death and have to render an account for our lives. Thus, the Church prays: Requiem aeternum dona eis Domine: et lux perpetua luccat eis. Amen. (Eternal rest grant unto them, O Lord: and let Thy perpetual light shine upon them. Amen.)

That which is termed "El Dia dela Muerte" (the Day of the Dead), on the other hand, is a popular social event in Spanish/Latin American countries, especially Mexico. It's based on a religious event. On this day, according to local custom, the Christian faithful celebrate the day by assisting at Holy Mass, visiting deceased loved ones at the cemetery, and offering prayers and charitable works for the repose of the holy souls in purgatory. In more modern times, the religious sentiment has been de-emphasized by secularization, and the use of painted skull faces, sweet bread treats, and pop music are used to create a party atmosphere and even encourage debauched behavior.

But at least the day is remembered.

The blurred lines between Christianity and the pagan subculture of the Santa Muerte cult cause great confusion. We must choose. If we are Christians, we must celebrate God's justice and mercy by praying for the souls of the faithful departed rather than going along with neo-pagan festivals like Halloween and days of communication with wandering spirits.

What about family members who are practitioners but still go to church?

In many families of Mexican/Latin American descent, this is the daily reality. So, the question must be asked with all charity and conviction: Are you still a Christian? If you have chosen Christ and His Holy Catholic Church, then you must have no dealings with witchcraft, the Santa Muerte cult or the false religion of Santeria, for these are counterfeit spirituality in which Christian elements are mocked and mimicked. Just because a Santa Muerte prayer ritual may make reference to the Divine Trinity does not mean that these practices are Christian.

What should I do if I have engaged in occult practices?

Remove and destroy all these counterfeit items from your life. Pray to Jesus Christ in sincere repentance for having sinned by having strange gods before you. You then must go to Confession and receive Holy Communion weekly, as well as be invested in the Brown Scapular. You must begin living an amended life, avoiding both sin and the occasions of sin.


A Prayer for Light
Come Holy Spirit, take me as Thy disciple; guide me, illuminate me, sanctify me. Bind my hands, that they may do no evil; cover my eyes, that they may see it no more; sanctify my heart that evil may not dwell within me. Be thou my God; be thou my guide. Wherever Thou leadest me I will go; whatsoever Thou forbiddest me I will renounce; and whatsoever thou commands me in thy strength I will do. Lead me unto the fullness of Thy truth. Amen.