Matt C. Abbott
The difference between boys and girls...

December 17, 2011
The following article is reprinted from the Christmas 2011 issue of Catholic Men's Quarterly magazine. Thanks to John Moorehouse, publisher of CMQ, for allowing me to reprint his article.

"I, DARTH MAUL, TAKE YOU...TO BE MY LAWFULLY WEDDED WIFE"

The Difference Between Boys and Girls

By John Moorehouse
My wife and I had been blessed with two boys before the birth of our daughter. Later, along came the third boy so now the count stands at 1 to 3...in favor of the girl. She's a tough little nut. I think we'd have to add another boy or two to the mix to even the odds. (Update: That's not in the cards immediately, however, as Anya and her brothers and parents are eagerly awaiting the arrival of a new baby girl in March.) But I don't want to write about my daughter Anya's particular qualities, as charming and, at times, exasperating as they are. No, rather, what I have to say, using her as an example, of course, will be along more general lines.

Having followed close on the heels of two older brothers, Anya has been surrounded by an assortment of light sabers, pistols, swords, shields, army men, and super heroes. However, her femininity stands out that much more amidst the arsenal.

When she was almost two, she had a fuzzy little pink purse she used to carry around. And, of course, she kept her stuff in there. You know, the usual things little girls carry: Polly Pockets, pink crayons, hair things, maybe a little comb or something. I don't know. But, in a fashion statement that would make Charlton Heston smile, she also packed heat in her pretty pink purse. Of course, a Derringer would have been more appropriate, but the six-shooter I'm sure could have done whatever damage she'd need to do if she got in a tight spot. And with two older brothers to contend with, two-year-old girls don't lack for tight spots. 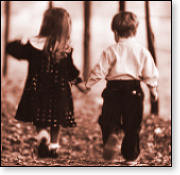 In addition to being able to turn weapons into charming accessories, little girls also love weddings. And being the Papa, I am enjoying my short window of time in which my beautiful little angel see me as the ideal husband. Many a night, I've come home from work to be informed that there will be a wedding...and I get to play the groom. Not exactly a shotgun wedding (though the purse is always at the back of my mind), but the consequences of refusing are, in some respects, even worse. The girl can shriek.

Anyway, I don't know where she could get this idea as my wife isn't one to talk about it, but somehow she innately knows that although you need a man for the wedding, it's not really about him at all. It's about the dress and the reception. So, we go through the formalities and then dance a waltz and we're married and live happily ever after. Then we get to do it all over again the next night. And, as any father would know, I never grow tired of her asking me to marry her.

Her sense of romance and love of weddings led to the event which inspired the somewhat incongruous title of this article. She and her brothers are forever showing their parents their artwork, army sets, etc. And, as I mentioned above, ours is a house full of blasters and light sabers. The Star Wars universe is peopled by a number of unsavory characters, perhaps none so intimidating and evil and ugly as one Darth Maul. Even his name sounds scary. And his face? Let's just say this is one bad dude.

So my little girl's mental landscape is inhabited by an odd mixture of Strawberry Shortcake, the Little Flower, and characters like the aforementioned Mr. Maul. I'm used to my son Brendan showing me drawings he has done featuring the latest battle between the forces of good and evil, and my oldest boy Aidan detailing the latest storylines. So, Darth Maul's nefarious countenance and anti-social behavior are well known to me. What I was unaware of was his sensitive side.

But give a girl a really shady character and what does she do? She goes and sees the good in him and sets him up with, if not herself, one of her friends. The difference between girls and boys was forever engraved in my mind when Anya came running up to me one day with her latest creation in hand. Looking at it for a while, I was at a loss, but like all good fathers knew better than to say, "What is it?" Instead, I simply said, "Oh, sweetie, it's beautiful." Seconds later she breathlessly informed me, "It's Darth Maul's wedding!"

"Lucky lady," I snickered under my breath.

And then, picking up my little girl, thought to myself, "Lucky man," and gave her a big hug and a kiss.


From a recent news release by John Moorehouse:


'House on the Moor Books is pleased to announce it has secured the exclusive rights to distribute the iconic Classics Illustrated line of comic books to the Catholic market, including schools and stores. Classics Illustrated was a defining feature of the American comics landscape throughout the mid-20th century. Selling well into the millions, the sturdy comics bring to life some of the greatest stories, both fiction and non-fiction, ever told.

'Moorehouse remembers finding the copies that had belonged to his uncles in his grandmother's basement as a boy and being enthralled by tales of Daniel Boone, Kit Carson, Joan of Arc and many others. On a whim in 2009, he looked them up online and discovered that they were being reissued by Jack Lake Productions out of Canada. He established contact and discussed the possibility of distributing the comics in Chile.

''My wife, four children and I had moved to Chile and were living in Santiago. I was teaching and exploring possible distribution options down there. Then on Feb. 27, 2009, the sixth worst earthquake in history at that time struck Chile and in the aftermath we decided to return to the U.S. Upon our return, I secured the rights to the Catholic market.'

'Moorehouse, whose company is also re-launching Catholic Men's Quarterly magazine this Christmas, feels that the CI line will be well-received by Catholics looking for wholesome reading material that children will love.

'My older kids have read them numerous times and keep going back to them. I need to get some more titles, and we have over 75 in the house,' he laughed. 'Non-readers and beginning readers will love the junior line as it features fairy tales, fables and folktales. These would be great for school libraries; in fact this is the perfect product for a school fundraiser as many parents would love to have these for their own children. We are putting together a virtually do-nothing program for schools which should be of great interest.'

'Anticipating the launch of the fundraising aspect, Moorehouse is selling the comics and Catholic Men's Quarterly online at www.cifundraiser.com, where there are numerous discounts.'