January 3, 2012
Susan Stafford had a turbulent childhood. And the transition to adulthood wasn't any bed of roses, either. Far from it.

The product of a broken home, Stafford endured years of immense emotional and physical abuse, became involved in drugs and teenage pornography by the age of 15, attempted suicide at one point, and worked as a prostitute at an escort service.

But now she's an avowed Christian, and she implores troubled souls to "Choose Jesus."

Stafford has authored Almost A Mother, from which the following excerpt comes (the book contains subject matter that is not suitable for children): 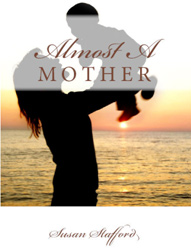 Twelve others were silenced, waiting for me to speak. I was asked to tell the story of how my childhood abuse began and to explain what had led me to attempt suicide by the age of fifteen. This was a therapeutic intervention home for troubled teenagers, who, like me, had experienced all manner of abuse and neglect. None of us wanted to be there, but as we were too young to sign ourselves out, we were forced to stay at our parents' wishes.

"Why don't you start from the beginning?" asked Dr. Martin. "There is no one here who hasn't experienced the things you have."

"Can I have a cigarette first?" I joked. Everyone laughed except Dr. Martin, who couldn't even manufacture a smile. Not that I expected much else from him. After all, it was his job as a psychologist to remain aloof. But the reality was that I didn't care to rehash my past. I was tired of telling it, so much so, that I had become numb to the story. But I knew that unless I played the game, I would never be free of this place. My throat tightened as I began to relate my story.

My mother and father divorced when I was in kindergarten. I remember the day well. I was playing outside in the front yard when I noticed my Dad packing the trunk. I asked, "Are we going on a camping trip, Daddy?"

In the same instant that my father looked down at me with his dark brown, bloodshot eyes, I noticed that his TV was sitting in the trunk.

He knelt down to my level and softly spoke. "No, Mommy and Daddy are getting a divorce."

"What's that?" I asked curiously.

His eyes welled up with tears. "I won't be living here anymore. I won't be coming back, ever."

I still did not understand what this foreign concept of divorce meant.

He knelt down to my level and softly said, "Your father loves you. I will always love you. No matter what, you will always be my little girl."

As I watched him package his last belonging and drive off, devastation engulfed me. In my five-year-old mind, I could not understand how my father could drive off and leave us. The emotional pain was too intense to bear. I ran into the house and cried passionately.

As the months went by, mother often told me that my Dad had schizophrenia, a medical condition that made him so strange it had damaged their marriage. It was easy for me to believe my mom when she told me the news, because one minute my dad would be Mr. Nice Guy, and the next he would seem completely insane. Today he would have been diagnosed as bipolar. But they didn't know what bipolar was back then, so he was labeled as schizophrenic. We never knew what would spark his fire. It was like walking on eggshells. I had learned at a very young age to stay completely out of his way because if I didn't, he would beat me severely with a belt several times, for reasons I never understood. But even though my father had two personalities, I still missed him terribly. Aside from his temper, there was another, softer side to him. Unlike my mother, when he was normal he'd be a lot more affectionate with me, and he showed me a side of him that I wish had always remained.

A short time after my Dad moved out, my mom met a man at a bar, and Herb entered into our lives. That's when our lives went from bad to worse.

From the first time I met Herb, I didn't like him. He was scary looking, and had a rigid personality to go with it. He was also an alcoholic, but aside from his drinking, he seemed like a normal person and was fun to be around. When he did drink, however, he was violent, and his rage scared me immensely. His dark brown eyes and rough face made his appearance less trusting.

My mother was a nurse and often worked hard and long hours. She was distant and never an affectionate person when I was growing up. I never heard encouraging words from her. There were so many times I had wished my mother would just give me a hug or a kiss, or say, "Hey, you did a really good job," but I never remember her doing that. The only physical contact I ever had with her was when she slapped me across the face. I was taught that children should be seen and not heard.

I was somewhat of a middle child. There were six of us total. Before my Dad met my mom, he had three children, then had another three more during his second marriage. The first three lived with us off and on throughout the years. They too had their own parachute of problems. They suffered a great deal of abuse from my father and their mother, who was not physically well enough to take care of them. I felt bad for them, but I was too absorbed with my own problems. Luckily, they had left for foster homes before Herb entered back into our lives again.

Of all the siblings, I was always the most cautious. My sister Julie and I were always fearful of Herb, but my younger brother David, the youngest of the six children, had too much faith that Herb would never hurt him.

Our lives had been in a constant merry-go-round motion ever since Herb entered them. We moved about every year thereafter, and sometimes even more than that. Herb would become very violent and my mom would always leave him when he would drink. The police were always taking reports, but nothing ever got done about it, although I don't know why. Herb had a prison history. I was never told the whole story, but I was told that it had something to do with murder.

I was always afraid to be alone with him when he drank. And since he was always between jobs, it was hard to avoid being around him. He would get professional jobs, but he could never keep them because of his drinking problem.

At times when my mother did get the courage to leave him, I always felt a big sigh of relief. But then he would sing her a love song, she'd go back to him, and the abuse would start up all over again. This trend continued from the time I was five until, at the age of sixteen, I tried to commit suicide and ended up here. I never learned how to make close friends in school or how to do well academically. We moved around too much....