February 4, 2012
(A version of this column originally appeared on American Thinker.)

Supporters of Planned Parenthood were furious about the recent decision by Susan G. Komen for the Cure to cease funding the abortion giant.

Were furious, mind you, because it appears that Komen has caved and reversed its decision. 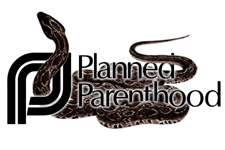 I have to admit that Planned Parenthood — with help from the mainstream media — has done a masterful job over the years of drastically downplaying its abortion business while at the same time portraying itself as a leader in women's health, which supposedly includes providing breast cancer screenings.

From a Feb. 2 article at LifeSiteNews.com:


'Although Planned Parenthood often used its role in cancer prevention to argue against the rash of state funding cuts last year, undercover investigations found the claim that it is heavily involved in cancer screening practically baseless.

I guess it's not surprising for an organization that's in the business of killing the innocent unborn, not to mention being investigated by a congressional committee "over abuses ranging from financial disparities to its compliance with federal regulations on taxpayer funding to concerns that it is covering up cases of sex trafficking." (Source) 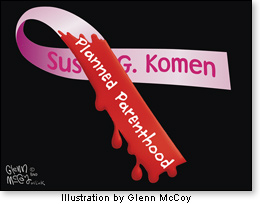 Woe to those who support such evil.

As for Komen, certain pro-life leaders are giving the foundation the benefit of the doubt, putting most of the blame on the nation's largest child-killing mafia, to which Komen had been giving money for supposedly helping women obtain breast cancer screenings.

And yet, Komen knew full well that Planned Parenthood was, and is, in the child-killing business when it got into bed, so to speak (but didn't contracept), with the abortion giant. Years later, however, Komen still doesn't seem to have a problem with abortion, which makes the recent turn of events all the more bizarre.

At any rate, Komen put itself in a quagmire of its own making, so I don't feel particularly sorry for the foundation. My hope is that the pro-lifers who donated money to Komen after hearing it was going to sever financial ties to Planned Parenthood will demand a refund.

Komen — which currently is making a murky and futile attempt to appease both the pro-death and pro-life camps — doesn't deserve a single penny from the pro-life community. It learned the hard way that when you lie down with the devil, you'll wake up in hell.