Matt C. Abbott
'My Soul Pants for The Living God'

March 20, 2012
The following article, written by Father Scott A. Haynes, S.J.C., appears in the March 2012 issue of Challenge Magazine, a Catholic publication based in Canada. Thanks to Father Haynes (who's associate pastor of my parish, St. John Cantius in Chicago) and the editors of Challenge for allowing me to reprint this edifying reflection! Please email me for subscription information.

MY SOUL PANTS FOR THE LIVING GOD

By Father Scott A. Haynes, S.J.C.
During this Lent, consider how St. Mary Magdalene came before Christ's tomb, weeping as she sought the Lord (John 20:13). In the The Dark Night of the Soul (19, 2), St. John of the Cross says that St. Mary Magdalene was a "soul sick in an advantageous way." He calls this the first step on the "ladder of divine love." It is the first stage of God communicating his ineffable, indescribable language of love to the soul. And it feels like disturbance in the soul, a kind of "love-sickness," which sets the soul searching for God. This is the goal of Lent, to develop this "love-sickness" for Jesus.

Imagine a dog, after a vigorous run, with his ears pinned back, panting, sucking air, desperate for water and for rest. It's not a very pious and pretty image is it — this panting? It conjures visions of flapping jowls and flared nostrils and saliva. But that is precisely why I love the image, "as the deer pants after the water brooks, so pants my soul after thee." The Psalmist has captured the alpha and the omega of religion, the burning center of the spiritual life — ardent desire for God. 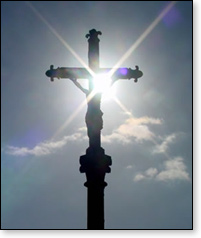 In Willa Cather's great novel Death Comes for the Archbishop, she tells the story of Father Latour, a French priest sent to Santa Fe to be made Bishop. A Native American guide named Jacinto was guiding Father Latour through a snowstorm in the New Mexico wilderness. The blizzard intensified; Father Latour started to weaken and began to fear for his life. Jacinto led him up a cliff to a small opening in a rock. They crawled through and found themselves in a cave. When they built a fire he saw they were in a great underground cavern that looked in the flickering light like an immense Gothic cathedral. They had entered an ancient Indian holy place. Father Latour began to hear a dizzy noise in his head. At first he thought it was vertigo, or some roaring in his inner ear. Listen to Willa Cather's words as she describes what happened next.

"But as he grew warm and relaxed, he perceived an extraordinary vibration in the cavern. It hummed like a hive of bees, like a heavy roll of ancient drums. After a time he asked Jacinto whether he, too, noticed this. The slim Indian boy smiled.... He took up a...torch, and beckoned the Padre to follow him along a tunnel.... There Jacinto knelt down over a fissure in the stone floor, like a crack in china, which was plastered up with clay. Digging some of this out with his hunting knife, he put his ear on the opening, listened for a few seconds, and motioned for the [future] Bishop [Father Latour] to do likewise. Father Latour lay with his ear to this crack for a long while, despite the cold that arose from it. He told himself he was listening to one of the oldest voices on earth. What he heard was the sound of a great underground river flowing through a resounding cavern. The water was far, far below, perhaps as deep as the foot of the mountain, a flood moving in utter blackness under the ribs of the antediluvian rock. It was not a rushing noise, but the sound of a great flood moving with majesty and power." (Willa Cather, Death Comes for the Archbishop, New York: Alfred A. Knopf, 1926, pp. 131-132.)

In the cave of the human conscience, where we are quiet and still before the almighty presence of God, we kneel down in that hard and rocky cavern, which God has carved out in our hearts as a place for us to meet Him face to face. The ear of our hearts strains to hear his still, small voice. We hear the great river flowing deep beneath that rocky cavern and so the Psalmist says, "Deep calleth on deep, at the noise of thy flood-gates. All thy heights and thy billows have passed over me." (Psalm 42:7) We hear the great river flowing deep beneath, down deep in our souls, deep in the heart of God. And at times of spiritual desolation we cry out, "My tears have been my meat day and night." Like St. Mary Magdalene prostrate on the ground, who goes weeping before Christ's tomb, her face is flat on the stone which has been cast aside by the Angel of the Resurrection. In one of her poems, Mary Coleridge captured the "love-sickness" of St. Mary Magdalene well:


"When Mary thro' the garden went,
Her eyes, for weeping long, were dim.
The grass beneath her footsteps bent,
The solemn lilies, white and slim,
These also stood and wept for Him.

When Mary thro' the garden went,
She sought, within the garden ground,
One for Whom her heart was rent,
One Who for her sake was bound,
One Who sought and she was found."


This Lent, as we prepare for the celebration of the Paschal Mysteries, let us ask for the grace to seek Christ with the same fervor of the Magdalene, with burning love, even with a heart that pants for the sweet refreshing waters of God's grace. If our spiritual desire is truly for God, then let us listen closely, so that we might hear Our Lord whisper in our ears, "Come to me, all you that labour, and are burdened, and I will refresh you" (Matthew 11:28).