June 3, 2012
There's a been a loud hum in the Catholic blogosphere in recent days surrounding the release of the feature film For Greater Glory, in large part due to its seemingly providential timing: The Catholic Church in the U.S. is under attack by the Obama administration, and we Catholics — actually, all God-fearing citizens — are faced with surrendering at least some of our religious liberty. (In fact, one could argue, as the late Father John Hardon, S.J., did, that we really don't have separation of church and state, but rather subordination of church to state.) 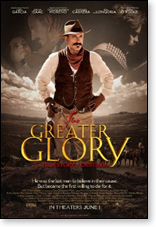 And if President Obama wins another term — and I fear he will — it may get even worse.

In regard to the movie itself, I first have to say that I don't consider myself a very good movie critic. I've seen a number of movies in my time, yet if asked to write several paragraphs on even my most favorite ones, I'd be hard-pressed to do so.

Overall, I appreciated For Greater Glory; it's a good movie. The performances of Andy Garcia and Mauricio Kuri are indeed laudable. The costumes and cinematography are top-notch, as is the musical score. And the factual information presented at the end of the movie is nicely done.

My two minor complaints: I wasn't crazy about the portrayal of Father Christopher (played by Peter O'Toole). To me, his vacuous look came across as a bit creepy. Also, the movie could have been somewhat shorter, although I concede that I get antsy when having to sit for more than two hours.

At any rate, For Greater Glory is far better than much of what comes out of Hollywood these days, and for that I give thanks.

In terms of Catholic teaching, the movie can make one reflect on the Church's "just war" doctrine. According to the Catechism of the Catholic Church (2309, 2312):


The strict conditions for legitimate defense by military force require rigorous consideration. The gravity of such a decision makes it subject to rigorous conditions of moral legitimacy. At one and the same time:

These are the traditional elements enumerated in what is called the 'just war' doctrine. The evaluation of these conditions for moral legitimacy belongs to the prudential judgment of those who have responsibility for the common good....

The Church and human reason both assert the permanent validity of the moral law during armed conflict. 'The mere fact that war has regrettably broken out does not mean that everything becomes licit between the warring parties.'


Father James Farfaglia, of the Diocese of Corpus Christi, loved the movie. He writes (slightly edited):

The 'R' rating is for violence. In my judgment, the violence is very realistic. The battle scenes are very realistic. I do not see any problem with a child of 10- or 11-years-old seeing this film with his or her parents. Parents know what is best for their kids, but the scene of the martyrdom of young Jose is really beautiful. He refuses not to say 'Viva Cristo Rey.' He remains faithful, even with the most horrendous tortures, like having the skin of the bottom of his feet cut off and forced to walk a long distance, with bloody feet, to his death. Kids need to see this. A young boy remains faithful.

All in all, the story of the Cristeros and the terrible persecution against the Catholic Church has finally been told. Viva Cristo Rey! Viva la Virgen de Guadalupe!