October 18, 2012
The Catholic bishops, who rightly oppose the Obama administration's grossly unjust HHS mandate, are united in promoting freedom of religion. And on Oct. 20, pro-lifers of various denominations will be rallying once again in support of religious freedom. (Click here to find a rally near you.)

But what about those who claim that abortion itself is a matter of religious freedom? Consider: In 1998, more than 700 pro-abortion rabbis signed a letter using the 'freedom of religion' argument to support President Clinton's veto of the partial-birth abortion ban. (Click here to read the text of the letter.)

I asked Eric J. Scheidler, executive director of the Pro-Life Action League and co-director of the Oct. 20 Stand Up for Religious Freedom Rally, to respond to the following question:

"What is the best response to abortion advocates who have asserted, and may assert even more boldly in the near future, that abortion is a 'religious right'; that outlawing or even restricting abortion in any way is a violation of religious freedom?"


While the United States was founded on strong principles of religious liberty and pluralism, religious freedom is not an absolute freedom. In particular, that freedom cannot impinge on more fundamental freedoms like the right to life. 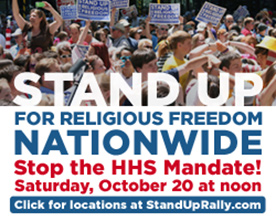 For example, one could not legitimately claim a right to engage in human sacrifice — a practice common to many religions in the ancient world — as a matter of religious liberty. Similarly, one could not claim a 'religious exemption' from any future law banning or restricting abortion.

Moreover, there is a logical flaw in such reasoning. One's religious doctrines may say that abortion is morally permissible, but it does not thereby become compulsory to get an abortion. It is not a violation of your conscience to be required to forgo an activity that your conscience says you may do, but not that you must. In fact, it's quite strange to contemplate bearing a child as somehow being an immoral act, or one that violates one's religious beliefs.

The Obama administration's HHS mandate stands in stark contrast. It does, in fact, compel people to violate their consciences by directly participating in something they consider immoral, namely, helping others to procure contraceptives and abortion-inducing drugs.

HHS mandate apologists might point to other cases in which citizens are compelled to fund activities they disagree with, like pacifists forced to fund wars through their tax dollars. However, in such cases there is a clear national interest at stake. You can't say the same for the HHS mandate, which compels employers to pay for contraceptives and abortion-inducing drugs, despite the fact that these things are widely and cheaply available.

There is no crisis of contraceptive access in the United States. It's pure fiction to say otherwise. Making contraceptives slightly less expensive for the women who choose to use them — almost never purely for reasons of health — is not urgent enough a national interest to justify dismantling decades of bipartisan consensus on freedom of conscience.