November 22, 2012
A friend alerted me to Father Michael Pfleger's public Facebook page. A sad and scary sight, I must say (click here to see it, but make sure you have a strong stomach). A few unedited comments recently posted by the renegade priest — who seems to relish the attention from his conservative "haters" — are as follows:


SUNDAY THOUGHTS... When the woman with issue of Blood pressed her way to Jesus it says she TOUCHED Him and Jesus said who TOUCHED Me? See Jesus knows the difference from folks who simply bunp into Him, rub Him and who TOUCH HIM! Tomorrow when you go to your place of Worship, ask yourself whether your going for a rub, bump or do you want and NEED A TOUCH! What you get from Jesus depends on what your looking for! How Hungry are You???? 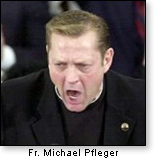 So sick of these Right winged Conservatives who are saying if you vote for any person or party that supports Abortion you are in "moral danger" and even go so far as to say "Your soul is at risk" First of all I don't know anybody running who is for abortion. Pro-choice does not mean pro abortion. I am AGAINST Abortion but it is not the ONLY Moral issue. Pope Paul VI said so is Poverty, Unemployment, Racism, Lack of excellent education any many more! DON'T BE DECEIVED by the ONE ISSUE THEORY! LASTLY NO ONE CAN THREATEN YOUR SOUL OR SALVATION! GOD FREELY GIVES IT TO US BY GRACE AND NO MAN OR WOMAN CAN TAKE IT FROM US!

The Election is Over, HOPE and POSSIBILITY WIN, Now is an opportunity for Republicans to allow their inner statesman to rise up and stop being the the party of NO and help move legislation forward to help move the Country forward, Now is the time for the President to accomplish all those AGENDAS we have been waiting for that we were told he couldn't do first term, and now is the the for WE THE PEOPLE TO RISE UP AND BE AGGRESSIVE in demanding issues of POVERTY, VIOLENCE, GUN CONTROL and EQUALING THE PLAYING FIELD OF AMERICA! SUCCESS WILL TAKE ALL THREE OF US DOING OUR PART!

At the risk of sounding harsh, it's an absolute scandal that this man continues to be a priest in good standing in the Archdiocese of Chicago. He remains a local media darling because he's now organizing "peace-making" basketball games for gangbangers. I guess charity requires that we pray for Father Pfleger and particularly for the people he's leading spiritually astray.


While the manger scene is now prohibited from being displayed in Palisades Park in Santa Monica, Calif., it thankfully is still allowed in the Illinois State Capitol Rotunda.

From a press release:

The Thomas More Society, a Chicago-based public interest law firm, has played an instrumental role in securing permits for this privately sponsored and constitutionally protected expression of religious faith in Illinois' central public forum, the classic 'public square' and 'marketplace of ideas' at the heart of our statewide political community.

Tom Brejcha, president and chief counsel, noted that the Thomas More Society has been honored to represent SNSC for the last five years, going back to its founding by the late Daniel T. Zanoza of Lincoln, Ill. The society also has been underwriting SNSC's Christmas displays during each of the ensuing five years.

'So long as these Christmas religious displays and ceremonies are privately sponsored, funded, and held in traditional public forums, they are constitutionally protected,' said Brejcha. 'Even the ACLU concedes that our Capitol Rotunda Nativity Scene is fully protected by the First Amendment. Christians have as much right to proclaim the joyful message of Jesus Christ's birth as political candidates have to get up on soap boxes to spout their own messages in our public squares.'

Not surprisingly, pro-homosexual clubs have made vast inroads in many Catholic colleges and universities nationwide. Click here to read an article on the subject.