December 3, 2012
The book The End of the Present World and the Mysteries of the Future Life, authored by Father Charles Arminjon, was completed in 1881 — yet it's still a timely tome.


It's one of those books that come out of nowhere, almost literally, just when the world needs it most. Is it all correct — what it reveals about the future, both for the world and the soul? From the vantage point of earth, who can say? It is written by a human.

But a great saint, Thérèse of Lisieux, was so taken by this book that it spurred her entry into the convent. 'Reading this book was one of the greatest graces of my life,' she says in her autobiography. 'The impression I received from it is too sweet to express. All the great truths of religion and the mysteries of eternity plunged into my soul a happiness not of this earth.'


Below is the foreword to The End of the Present World. Thanks to Sophia Institute Press for allowing me to reprint this excerpt in my column. Click here to purchase the book in electronic format or paperback directly from the publisher; click here to order it in paperback from SpiritDaily.com.

It has seemed to us that one of the saddest fruits of rationalism, the fatal error and great plague of our century, the pestilential source from which our revolutions and social disasters arise, is the absence of the sense of the supernatural and the profound neglect of the great truths of the future life. The earth is afflicted with a dreadful desolation, because the majority of men, fascinated by the lure of fleeting pleasures, and absorbed in their worldly interests and the care of their material affairs, no longer fix their thoughts on the principal considerations of the Faith, and stubbornly refuse to recollect within themselves. It may be said of our present generation what the prophet Daniel said, in his time, of the two old men of Babylon: "They suppressed their consciences; they would not allow their eyes to look to heaven, and did not keep in mind God's just judgments."

The two causes of this terrifying indifference and profound universal lethargy are, obviously, ignorance and the unrestrained love of sensual pleasures that, by darkening the interior eye of the human soul, bring all its aspirations down to the narrow level of the present life, and cut it off from the vision of the beauties and rewards to come. Now, since wise men have found at all times that contradictions are overcome with their opposites, it seemed to us that the most efficacious remedy with which to fight confidently against the inveterate evil of naturalism was a lucid, clear, and exact exposition, without diminution, of the essential truths dealing with the future life and the inevitable termination of human destinies. 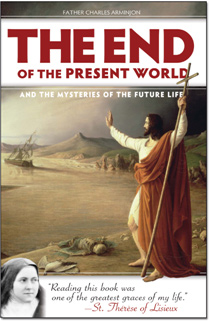 Perhaps we shall be accused of expressing this or that assertion of ours too crudely and starkly, and of broaching the most serious and formidable points of Christian doctrine, without, at the same time, modifying and softening them so as to adapt them to the prejudices or apathy of certain souls, unacquainted with such grave considerations — like a physician who carefully allows only a limited amount of light to a sick friend, in order not to hurt his painful eyes by excessive glare. However, in the religious and supernatural order, the phenomena and effects wrought upon the soul are often the reverse of those that occur in the physical and material order. In the visible world, an excessive amount of light dazzles: it leads to dimness of vision and causes blindness.

On the other hand, as soon as the mind enters the intellectual realm, and is transported into the vast sphere of invisible and uncreated matter, excess is no longer to be feared. Jesus Christ is the great luminary of our intellects, the food and life of our hearts: He is never better understood, or more loved, than when He manifests Himself liberally in the integrity of His doctrine and the most eminent splendors of His divine personality. The example of the Apostles, announcing the gospel amidst the twilight of paganism, and boldly preaching Jesus Christ crucified before the Roman Senate and amidst the philosophers of the Areopagus, is enough to tell us that truth is attractive to souls naturally Christian, and that it enlightens and convinces them only insofar as it is presented to them in all its strength and all its clarity.

Our trial is limited in its duration to the period of the present life. If, as the rationalists maintain, this life is only a link in the chain of our destiny, and if the course of time wherein man is subject to strife, temptation, and the blandishments of the senses and of creatures should continue indefinitely, then Jesus Christ will never be king, virtue brings no hope, and evil will remain eternally triumphant. Thus, it is quite certain that the scene being played here below will, sooner or later, reach its climax and end. Mankind will then enter upon a new phase of existence, and all that we cherish, all that we search after in this present life, will be less than a shadow, and vain smoke. This is a certain fact, which all our discoveries and the marvels of our genius will not be able to anticipate.

Now, the moral value of life is determined by the end to which it tends, just as the utility of a road is estimated by the traveler only insofar as it helps to bring him more surely and directly to the final point of the journey he has undertaken. Accordingly, to deal with the future life and the last ends is really to expound the science and philosophy of human life, setting out the fundamental principles on which the whole of perfection and morality is based.

The volume of our conferences that we are publishing is a continuation of the one we brought out on the Reign of God. The reign of God is inaugurated, grows, and comes to its completion in the course of time; it will not be perfect and consummated until the age to come. So, instead of giving our book the title The End of the Present World and the Mysteries of the Future Life, we could, with equal justice, have called it The Triumph of Jesus Christ and His Church in the Future Life.

Our arguments and maxims on the vanity of the face of this passing world, the futility of all undertakings conceived outside the perspective of the Faith and not having the final end as their aim, the irremediable misfortune reserved for the wicked, and our other subjects — the advent and reign of the Antichrist and the temple of immortality, the rewards destined for the just, the restoration of fallen man through the law of sacrifice and the purifying crucible of suffering — seemed useful to us in order to shed the salve of consolation upon wounded and embittered hearts, to lift up disheartened and dejected souls, and, in the calamitous and troubled days through which we are living, to help Christians become men of Sursum, by inspiring them with resignation and patience; in order, furthermore, to strengthen them amidst the present sorrows, by raising up their hopes and desires toward a better fatherland.

By drawing upon the pure founts of Tradition and the Fathers and instructing ourselves by the light of Holy Scripture, we have sought to satisfy the anxious and troubled souls of our time, and to offer them the true solution to the mysteries of life as taught to us by Christianity. May we contribute to making Jesus Christ and His Church loved, and to inculcating more and more in those who read our work this cardinal truth: "To serve God and keep His Commandments is the whole of man!"