February 9, 2013
Regarding the brouhaha over the Boy Scouts possibly accepting leaders who identify as gay or lesbian, I've asked Father Richard Perozich, a priest of the Diocese of San Diego, for his take on the matter. Father's comments are as follows. (For those who might be wondering, I fully agree with his analysis.)

The Boy Scouts of America is an organization that trains boys to become mature adult men. It is open only to boys who wish to live by its oath and law, which respects God and country and assists others. In this process, it must not only lead boys toward manhood, but also protect them from immoral ideas, philosophies and people. It requires, then, leaders who subscribe to its oath and law and who are mature men and women.

It must be acknowledged that boys will struggle against lust in its many forms, but a good scout will not identify himself with his temptations simply to end the struggle and justify immoral behavior. With the help of moral leaders, he will be brought to embrace a struggle as one of the many growth issues in life.

I believe there is room in scouting for any boy committed to personal growth in all aspects of his life according to the scout oath and law. Yet if a scout identifies himself by his temptations, he is not engaging the program. He scandalizes other scouts and encourages them to abandon the moral life. Such a scout would need special guidance, and the other scouts would need protection from him, particularly if he sees other boys as potential sex partners.

Adults who reject chastity and who self-identify as gay or lesbian should not be Boy Scout leaders.

Leaders in politics, business and science need to stand up to the radical homosexuals who are attempting to undermine scouting and tell them to keep their passions in check; to 'come out' – not to identify as gay or lesbian, mind you, but to come out of homosexuality. Leaders should not give in to the demands of the homosexual lobby and its sympathizers.


A 29-year-old woman died [Feb. 7] ... of fatal complications suffered during an abortion at 33 weeks performed by Leroy Carhart at Germantown Reproductive Health Center in Germantown, Maryland....

The woman, who came for a third-trimester abortion from out-of-state, arrived at GRHC on Sunday and was seen by pro-life activists every day through Wednesday. Eyewitnesses said she appeared 'pale and weak.'

Early Thursday morning, the woman began suffering chest pains and other discomforting symptoms. Her attempts to reach Carhart were unsuccessful. The woman was taken by her family from her hotel to a nearby hospital emergency room at approximately 5:00 a.m. Efforts by hospital staff to contact Carhart or get informational assistance from the abortion clinic were unsuccessful. 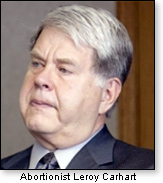 The patient suffered massive internal bleeding into her abdominal cavity. She slipped into a Code Blue condition approximately six times before finally succumbing to her injuries at around 9:30 a.m. The case has been placed with the Medical Examiner for further investigation.

'Three things need to happen here,' said Father Frank Pavone of Priests for Life. 'First, the state of Maryland has to shut down Carhart's killing business. Second, every person who cares about this needs to spread the word immediately about this tragedy, to awaken the consciences of our neighbors. This includes pastors speaking out about the harm abortion does, and it includes all of us telling the stories of those harmed and killed by abortion.

'Third, we need to redouble our efforts to mobilize people in the pro-life cause. If this latest tragedy isn't enough evidence that the time to end abortion is now, then what is?'


Indeed. Hopefully the young mother truly repented in the last moments of her life. As for Carhart, we can pray for his conversion or, if he's completely closed to God's grace, for his natural death so that he won't kill any more people.