'They [the regime] have total power and we cannot overturn them. Electorally we are now a minority. In terms of armed force, they have overwhelming superiority. The only brake on their actions right now is that moving too swiftly against us or against too many of us could backfire, so they will turn the screws incrementally, slowly lulling the low information folks to sleep.... Hope must now come from knowledge of Truth and love of Truth, no matter what. Hope cannot arise from optimism, because there is none left.'

– A friend of mine on the persecution of pro-life, pro-family advocates

Given all the hoopla surrounding the U.S. Supreme Court and so-called gay marriage, I figure it's an appropriate time to feature the following article, written by Laurie Higgins of the Illinois Family Institute, regarding another national campaign by the homosexual lobby: the Day of Silence. (The insertion of the cartoon is my idea; it's unrelated to the Day of Silence, but timely and humorous nonetheless.)


On Friday, April 19, 2013, the Gay, Lesbian and Straight Education Network (GLSEN) is once again exploiting public schools to promote homosexuality and gender confusion as moral and normative through the political protest called the Day of Silence.

A coalition of pro-family groups [see below] is urging parents to keep their children home from school on the Day of Silence if your school is allowing students to refuse to speak in class.

GLSEN's Day of Silence, which began on college campuses and is now disrupting the academic environment of thousands of high schools and middle schools around the country, exploits legitimate anti-bullying sentiment to undermine the belief that homosexual acts are immoral. 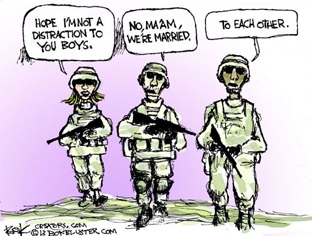 GLSEN's end game is the eradication of conservative moral beliefs and the creation of a social and political climate in which it is impossible to express them. Their cultural vehicle of choice for this radical social experiment is public education. What a strategic coup for homosexuals and their ideological allies: use our money to capture the hearts and minds of our children.

Efforts to exploit public education for the purpose of eradicating conservative moral beliefs are dramatically increasing every year. Homosexual activists and their allies are aggressively targeting younger and younger children through "anti-bullying" laws, policies, and curricula; through the effort to nationalize "comprehensive sex ed"; through laws mandating positive portrayals of homosexuality and gender deviance in curricula; and through events like the National Coming Out Day, Ally Week, Spirit Day, LGBT History Month, LGBT Pride Month, and the Day of Silence.

And conservatives do virtually nothing. Our complacence makes us complicit in the damage done to our children and our culture. Moreover, we teach our children by example to be cowardly conformists. It's time to resist and there's no easier way to resist than to call your children out of school on the Day of Silence.

Parents and Guardians: Call your children's middle and high schools and ask if students and/or teachers will be permitted to refuse to speak during class on Friday, April 19, 2013. If your administration allows students and/or teachers to refuse to speak during class, call your child out of school. Every student absence costs school districts money.

When administrators refuse to listen to reason and when they allow the classroom to be exploited for political purposes, parents must take action. If they don't, the politicization of the classroom and curricula will increase.

If your administrator tells you that they do not permit students or teachers to refuse to speak in class, ask him or her how that is communicated to faculty and students and how it is enforced.

The ACLU has issued this statement to students regarding silence in class:


'You do have a right to participate in Day of Silence and other expressions of your opinion at a public school during non-instructional time: the breaks between classes, before and after the school day, lunchtime, and any other free times during your day. You do not have a right to remain silent during class time if a teacher asks you to speak.'


The idea that homosexual acts are moral, good, or normative is not a fact. It is a non-factual, controversial moral belief. As such, no government employee or publicly subsidized institution has the ethical right to teach it to children implicitly or explicitly. It is entirely possible for schools to work toward the important goal of eradicating bullying without affirming or even mentioning homosexuality or gender confusion. There are many conditions for which students are bullied that are never mentioned or affirmed in public schools.

It is unconscionable that conservative parents remain silent, acquiescent, fearful non-participants in our public schools while homosexuals and their ideological allies engage continuously in vociferous, vigorous, and bold action.

Conservatives need to start acting and speaking as if we think our moral beliefs are objectively true. Conservative teachers need to create activities that require students to speak on the Day of Silence, and conservative parents need to teach their children by example to take a stand for truth.

Please call your children out of school if your administration permits students to refuse to speak on the Day of Silence. For further information, including parental instructions and a sample calling out letter, visit www.doswalkout.net.