Matt C. Abbott
'Who is the Devil?'; 'Message of Hope: Confessions of an Ex-Satanist'

Please keep me in your prayers.

The following are excerpts from two books with the same theme. The first is from Who is the Devil?


In these pages written over half-a-century ago, Nicolas Corte gives you incontrovertible proof that Satan exists, that he and his legions of devils assault you daily, and that by means of relentless attacks, overwhelming and subtle, they intend to corrupt you, damn you, and drag you into hell along with those you love and all the rest of mankind.

A grand battle is raging, right now, for the future of your soul: not an abstract battle of ideas and principles, but a tough, personal struggle that pits God and you against Satan and his minions. Worse: the nearer you grow to God and the closer to victory, the greater are the traps the devil lays in your path....


Click here to order Who is the Devil? in either electronic format or in paperback.

Thanks to Sophia Institute Press and Tau Publishing for allowing me to reprint these excerpts in my column.


If, in Newman's sense of the word, there is a striking convergence in the religious history of the world, it is to be found in the decisive role played by Satan both in the fall of Adam and Eve and in the life and death of Jesus Christ.

One of the most realistic ways of understanding the life of Jesus, and even more His death, is to look upon it as a tremendous battle fought by Satan against the Savior of men. We are not accustomed to considering it from that angle, and yet it is thus that the tragic grandeur of the Christian drama appears most clearly to us. He who had been a "murderer" from the first, Satan, reached the very peak of his triumphs with Jesus, for with Jesus he achieved deicide. He never aspired to anything greater. He was satisfied. 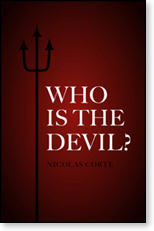 But his triumph rebounded upon himself. We detect, in his deicidal madness, the same error that we notice nowadays in that triumph of technique and science, the atomic bomb. This victory of the human mind, puffed up with pride, is also its downfall. Man's knowledge rebounds upon man. He draws back in horror from his own power. In the same way, the death of Christ, the supreme exploit of Satan's hatred, was the signal for his defeat and the decline of his dominion.

By saying that, are we yielding to a theological illusion? Are we the victims of groundless speculation? Which evangelist, the authorized witness of Christ's works and of the profound reason for the Incarnation of the Word, shall answer these questions on our behalf? The other evangelists took their point of departure in time but one alone, John, looked to eternity: "At the beginning of time the Word already was; and God had the Word abiding with him, and the Word was God.... And the Word was made flesh and came to dwell among us!" (John 1:1, 14).

Now, this same St. John, wishing to tell the Christians at the end of the first century of the final reason for the Incarnation, wrote in his first letter: "If the Son of God was revealed to us, it was so that he might undo what the devil had done" (1 John 3:8). And from beginning to end of the same letter, he identifies sin with the work of the Devil. For him, all sins com- mitted since the beginning of the world have been at the instigation of the Devil. If Cain killed his brother, it is because he "took his character from the evil one" (1 John 3:12). The whole Christian problem consists in eschewing the evil one, escaping from the grasp of the evil one, of belonging only to God. And so St. John's conclusion is as follows: "The man who has been born of God, we may be sure, keeps clear of sin; that divine origin protects him, and the evil one cannot touch him. And we can be sure that we are God's children, though the whole world about us lies in the power of evil" (1 John 5:18).

It is Jesus that St. John means by this vivid expression: the man who has been born of God. And in the passage you have just read, Jesus' mission is once again summarized: He came "to undo what the devil had done."

Foreword
This book [A Message of Hope] was written for priests, religious, and lay people who take spiritual warfare quite seriously and for those who would like to know what spiritual warfare is all about. It was written by someone who could rightly be called an expert in this field because of her many years as a prisoner in a satanic cult. In this book, Deborah L. uses the experiences of her sordid past to help people who are caught up in an occult lifestyle to escape from the slavery of the satanic movement. In so doing, she continues to suffer the attacks and assaults from the "other side."

Deborah's inspired words of wisdom are also directed to individuals who need to be protected from the "wickedness and snares of the devil." Her last chapter is a practical guide for those who desire to defend themselves from evil influences that plague our culture as a result of atheism and various attacks on human life.

Many priests will be very grateful to Deborah for writing this book, as indeed I am. She writes about things that are not taught in seminaries and are sometimes actually ridiculed. Having worked with Deborah, along with Sr. Francanne, on the production of this book, chapter by chapter, I have come to recognize the awesome respect she has for truth. Because of her autism, it seems that she has a heightened awareness of truth, which has come to her in a number of mystical ways. I shall always appreciate what she has taught me about the spiritual life in general and the spiritual warfare in particular. I hope and pray that you will have a similar experience.