A brief bio of Dr. Peters:


[He] has held the Edmund Cdl. Szoka Chair at Sacred Heart Major Seminary in Detroit since 2005. He earned a J.D. from the University of Missouri at Columbia and a J.C.D. from the Catholic University of America. In 2010, he was appointed a Referendary of the Apostolic Signatura by Pope Benedict XVI.


He's also the author of several books, including Annulments and the Catholic Church, which has been featured in this column.

The following are two excerpts from another book he authored, Excommunication and the Catholic Church (in question-and-answer format), published by Ascension Press. Thanks to Matthew Pinto and Dr. Peters for allowing me to reprint this material.

Click here to order a copy of Excommunication and the Catholic Church from the publisher.


How does denial of communion differ from full-fledged excommunication? 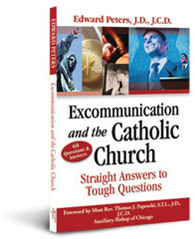 Denial of holy communion (i.e., the Eucharist) is quite distinct from excommunication, but both practices are receiving increased attention in Catholic life today and many people are confused about the differences between these two situations.

Excommunication is an ecclesiastical penalty. It is imposed or declared on those who have committed a certain type of canonical crime. In most cases, specific procedures have to be followed for the effects of excommunication to be fully visited upon an individual, and these steps include numerous procedural safeguards to guard against unjust infliction of such a severe penalty. To be sure, one of the consequences of excommunication is the loss of the right to the receive holy communion, but it is only one of the consequences that accompanies excommunication (for the others, see question 24). Finally, an excommunicated individual has to follow, in most cases, certain formal steps to have the penalty lifted.

On the other hand, denial of the Eucharist under canon 915 is not an ecclesiastical penalty but a sacramental disciplinary norm. It is designed to prevent the immediate harm that can be caused by the reception of the Eucharist by those whose own actions have demonstrated a fundamental disregard for the teachings of the Church. Because denial of the Eucharist is not a penalty, it is not limited to those cases in which one has been convicted of canonical crime. Canon 915 allows the Church to respond more quickly in the face of public sin. The other consequences that accompany excommunication (for example, restrictions on receiving the other sacraments or holding ecclesiastical office) are not included in a notice under canon 915 that one is not permitted to receive the Eucharist. Moreover, if one wishes to be readmitted to the Eucharist, instead of having to follow a detailed canonical procedure for the lifting of a penalty, one can simply repent of the sinful behavior, go to confession, and promise not to engage in it again.

"Excommunication" is one of the most highly-charged and feared words connected with the Catholic faith. It is also one of the most misunderstood. Many people incorrectly believe that a person who has been excommunicated has been "kicked out" of the Catholic Church. They may also think that this is a permanent and irreversible punishment. The penalty may be viewed as harsh, lacking in charity, even un-Christian.

In this book, Excommunication and the Catholic Church, Dr. Edward Peters sets the record straight and answers a variety of questions about the ecclesiastical sanction known as "excommunication." This type of analysis is very needed and timely.

During the revision of canon law which took several years to complete following the conclusion of the Second Vatican Council in 1965, and which culminated in the publication of the revised Code of Canon Law in 1983, there were many voices, including some bishops and canon lawyers, who were calling for the complete abolition of all penalties in canon law. Ideally, it was thought, everyone would conform to the law voluntarily out of love for Christ and His Church. Realistically, however, not everyone conforms easily to the ideal. Thus, while coercive penalties were retained as necessary for maintaining proper order in any society, one of the ten principles for the revision of the Code of Canon Law was that penalties should be kept to a minimum.

Excommunication belongs to the genus of sanctions known as censures, in contrast to expiatory penalties. Expiatory penalties (canon 1336) punish the offender for a prescribed time or an indefinite time and seek to remedy the damage or injustice done to societal values by the offense and to deter others from engaging in similar wrongdoing. In contrast, censures are considered to be "medicinal penalties" (canon 1312, §1, 1º), which means that they seek to persuade the offender to cease the wrongful behavior and reintegrate the person into the life of the ecclesial community. As such, censures are lifted when the offender "withdraws from contumacy," i.e., from engaging in the wrongful behavior and making suitable reparation for damages, if necessary (see canons 1347 and 1358).

Properly understood in this way as a medicinal penalty, excommunication certainly does not expel the person from the Catholic Church, but simply forbids the excommunicated person from engaging in certain activities (listed in canon 1331) in the life of the Church until the offender reforms and ceases from the offense. Once this happens, the person is to be restored to the fullness of participation in the life of the Church. Although the remission of the censure pertains to the competent authority to determine whether the person has actually withdrawn from contumacy, in a sense the offender holds in his or her own hand the key to the release from the censure. If the wrongful behavior ceases and any necessary reparation or restitution is made, the excommunication will be lifted; if not, it continues.

Thus, some people may be excommunicated for only a short time. For others, the excommunication may never be lifted if they do not repent and change their ways. Church history over the past two millennia provides many examples of both, some of them described in this book by Dr. Peters. For example, King Henry VIII was excommunicated for defying the Pope and declaring himself to be head of the church of England (today called the Anglican Church, except in the United States, where it is known as the Episcopal Church due to the desire of the American revolutionaries to disassociate themselves from identity with England). Henry VIII never "withdrew from contumacy" and hence died excommunicated. In contrast, the racist segregationist Leander Perez was excommunicated by New Orleans Archbishop Joseph Rummel in 1962, but since Perez repented before his death in 1969, he died as a Catholic in good standing with the Church. This is the outcome that the Church seeks and fervently desires.

Seen in this way, a censure such as excommunication is not at all vindictive, but may be seen as a sort of "tough love," just as loving parents discipline their children to teach them the difference between right and wrong. In fact, it would be most unloving to allow someone to persist in their wrongdoing without pointing out the fault. Jesus spoke about fraternal correction (Matthew 18:15-17) and St. Paul wrote that "love is the fulfillment of the law" (Romans 13:10). My own Episcopal motto reflects this: Lex Cordis Caritas, that is, the Law of the Heart is Love.

Dr. Peters has provided his readers with an excellent description of the Church's loving remedy known as excommunication, by which all the Christian faithful may be formed into the one holy, Catholic and apostolic Church as the loving Bride of Christ (Ephesians 5:22-33).