July 1, 2013
It gets tiresome to see the mainstream media constantly fawning over the likes of Nancy Pelosi, Hillary Clinton and now the staunchly pro-abortion Texas state senator Wendy Davis (who, incidentally, was an associate of Ralph McCloud, the current director of the Catholic Campaign for Human Development; click here for that story) – all the while claiming to be objective, of course.

One woman who's exponentially more deserving of praise than the aforementioned three women combined is veteran pro-life activist Monica Migliorino Miller, Ph.D., married mother, director of the Michigan-based Citizens for a Pro-Life Society, and associate professor of theology at Madonna University.

Dr. Miller, author of the book Abandoned: The Untold Story of the Abortion Wars, recently submitted an op-ed to The New York Times in response to a June 20 op-ed by former Seattle City Council member Judy Nicastro, who procured a late-term abortion and, sadly, chooses to defend the horrid procedure. Click here to read Mrs. Nicastro's op-ed, if you can stomach it.

Dr. Miller's op-ed was not accepted for publication by The Times, as the paper's policy is not to run op-eds in response to other op-eds; only letters to the editor. (Thankfully, The Times did at least print a letter by Dr. Miller; click here to see it.)

The following is Monica Migliorino Miller's op-ed that wasn't run by The Times (with very minor edits). 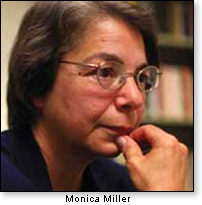 Judy Nicastro (June 20 op-ed) opposed the Pain-Capable Unborn Child Protection Act (H.R. 1797), that would ban most abortions beginning at 22 weeks gestation. She tells a personal story of how she and her husband aborted their 23-week unborn child after a prenatal diagnosis revealed that the twin boy suffered from a herniated diaphragm, a condition in which a hole in the developing diaphragm causes abdominal organs to be pushed into the chest cavity thus compromising lung development.

Her opposition to HR 1797 is based on false moral, philosophical and medical arguments. Nicastro supports legalized abortion-on-demand, even the abortions of healthy second-trimester babies, unless they are viable – able to sustain life outside the womb. Viability, however, is an arbitrary standard and cannot serve as an objective measure of the humanity of the unborn child and determine which persons have a right to live. One baby may be viable at 19 weeks while another at 23 weeks is not. Shall we say, then, that the 19 week-old preborn is more human and thus the subject of rights, while the older, but non-viable preborn, is not?

The real issue behind the Nicastro's justification to abort their child is this: Is human suffering a reason to terminate human lives affected by such suffering? Nicastro's answer is a definite yes.

If the Nicastros had permitted their son to be born, he would have had serious difficulty breathing, need surgery, and, possibly for a time, a machine to help him breathe. Nicastro says, "The thought of hearing him gasp for air and linger in pain was our nightmare." These words are most telling. The suffering was something they could not bear and so abortion was the "reasonable option."

In other words, the Nicastros failed in ultimate compassion.

It is easy to understand such failure in the face of their terrible burden. But the real danger is not the failure in courage; it's the philosophy that underpins such failure. Instead of finding the moral courage to suffer with their son, the Nicastros justified eliminating the one who was suffering. The Nicastros practiced the ethics of Huxley's Brave New World: a world that measures human worth by productivity and quality of life; a world that eliminates those who are sick, old, handicapped and dying, to create a world without pain. This is a dangerous philosophy with serious implications for society. Once a society forfeits the primary principle that the lives of the innocent are inviolable, any killing may be justified.

One side of the Nicastro story – a side not told – is that their son may have survived his condition. Any study of congenital herniated diaphragm reveals that children born with this serious deformity have a high survivability rate. One medical professional website placed this as high as 90 percent, especially newborns who do not require external mechanical oxygenation. These babies will suffer for a time on the road to recovery. Some may experience a lower "quality of life." Thus, the Nicastro's situation calls for compassion.

Nonetheless, killing this preborn child because he was handicapped and would experience suffering is not justified – just as the killing of any handicapped and suffering human being is not justified. This is a moral tenet of any civilized culture. Furthermore, even if this child was born dying, he had a right to die his own death in the loving arms of his parents, assuming he was beyond the reach of medical intervention.

Nicastro softens her tragic decision with the statement, "He died in a warm and loving place, inside me." The fact is, the baby didn't die. He was killed by a needle inserted directly into his heart – a procedure that placed his twin sister, healthy and thus not targeted, also at risk. The womb, a sanctuary of life and protection, was turned into a chamber of invasion, danger and death. This is the reality that needs to be faced.

The personal story of one woman's need to justify the abortion of her ill son should not blind us to the greater moral and social implications of such killing. Nicastro's moral arguments for legalized abortion and justification for pre-natal euthanasia need to be objectively examined, and, for the sake of real compassion and true justice, rejected.