July 11, 2013
Yet another diocesan head-scratcher. This time, it's the Diocese of Sacramento.

From the Napa Valley Register, via California Catholic Daily (click here for the full article):


The Diocese of Sacramento has canceled the appearance of Robert Spencer, a controversial writer about the threat of Islam, at St. Stephen the First Martyr Parish – but Spencer is still scheduled to speak at the conference being put on by the Napa-based Kolbe Academy Home School....

Spencer's writings about Islam – particularly on his blog – have stirred up controversy around the globe. Jihad Watch was recently cited by the British government as a reason not to allow Spencer into the United Kingdom. A letter from the U.K.'s Home Office stated that Jihad Watch has been 'widely criticized for being Islamaphobic' and that Spencer also co-founded the groups Freedom Defense Initiative and Stop Islamization of America, which have both been described as 'anti-Muslim hate groups.'


Sacramento Bishop Jaime Soto apparently doesn't want to deal with the protests of the "politically-correct" left. Or perhaps he just doesn't like Spencer's work. It's hard to say, though, because the diocese has not issued an explanatory statement as to why it canceled Spencer's parish talk.

A diocesan official, while acknowledging my email inquiry about the situation, did not elaborate.

Spencer's latest book, Not Peace But a Sword: The Great Chasm Between Christianity and Islam (published by Catholic Answers), is reviewed by Father C.J. McCloskey at the website of the National Catholic Register.


This book is his most interesting yet, as it makes the case for the fundamental disagreement between Christianity and Islam. Spencer writes: 'One of the oddities of contemporary 'interfaith dialogue' is that, all too often, out of overzealous irenicism, it glosses over, or ignores altogether, the disagreements between religious traditions, as if pretending that they didn't exist would make them go away.'

[Spencer] expands on the vast differences between Christianity and Islam on the character of God, Jesus and Divine revelation; the nature of truth and the moral law; religious freedom and other basic rights; life issues, marriage and sexual morality, including the rights and dignity of women....

...At its worst, Islam is diabolical; at its best, it is a Christian heresy – not unlike Mormonism without the violence. The ultimate answer to the threat of Islam from within or without the United States is not just a strong defense, but a virtuous people who believe in and live their lives by the universal Church that Christ founded.

On a related note, in my November 23, 2012 column, I reprinted the introduction to William Kilpatrick's book Christianity, Islam, and Atheism: The Struggle for the Soul of the West (published by Ignatius Press). Below is a significant portion of that introduction. Click here to order a copy of the book directly from the publisher. 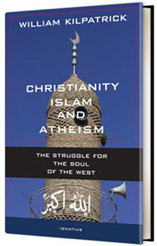 Unfortunately, many Christians have also fallen into the habit of ignoring the differences. The Islamic faith is founded on a blunt rejection of basic Christian beliefs, but you would hardly know it from reading official Church statements or from listening to leading prelates. Instead of informing their flocks that Islam rejects Christ and requires its faithful to work toward the eventual subjugation of Christians, many Christian leaders have been more intent on emphasizing the common ground that Christians and Muslims share. For example, the Second Vatican Council's declaration Nostra Aetate focuses almost exclusively on the similarities between Muslims and Christians. That approach was in keeping with the spirit of change and openness that marked the Council; moreover, it seemed to fit with the prevailing circumstances in the Muslim world at the time. The search for shared beliefs and values arose at a time when the militant side of Islam was kept firmly in check by secular rulers. But it now seems that the Islamic world the Council Fathers were familiar with was an aberration – a brief departure from the path laid out by Muhammad when he called for Muslims to make the whole world submit to Allah.

During the 1960s, Westernized and secularized Egyptians could laugh along with President Nasser when, speaking before a large assembly, he related how, years earlier, a Muslim Brotherhood leader had demanded that he enforce the wearing of the hijab, the head scarf traditionally worn by Muslim women. Nasser replied, 'Sir . . . you cannot make one girl, your own daughter, wear it, and yet you want me to go and make ten million women wear it?' Nasser's remarks brought a burst of applause and laughter from the audience; but, as is now evident, the wearing of the hijab is no longer a laughing matter in Egypt, and the Muslim Brotherhood, the butt of Nasser's joke, is now the dominant political force there.

Many Christians still hope that Muslims and Christians can unite in a common front against atheism and aggressive secularism, but that spirit of cooperation and mutual respect is not shared by many of Islam's religious leaders. The situation that prevailed in the Muslim world at the time of the Second Vatican Council is rapidly disappearing. The face of Islam that now presents itself very much resembles the supremacist religion that once threatened Christendom. In light of this development, it now seems that the common-ground thesis is overdue for a reexamination.

Tolerance needs to be balanced with justice, and justice seems to require that Christians be provided with a fuller account of Islam – if for no other reason than that their survival may depend on that knowledge. Although there is some common ground between Christianity and Islam – as there is some common ground among all religions – it might be wise to start looking at some of the profound differences between the two faiths. For example, because jihad is not an interior spiritual struggle as many have been led to believe, but rather a serious obligation to subdue non-Muslims, a lot of Western Christians are going to be woefully unprepared for the kinds of things that are already happening to Christians in Egypt, Iraq, Iran, Pakistan, Malaysia, Indonesia, Nigeria, and Sudan.

Being prepared is contingent on being informed, and many Western Christians are no better informed about Islamic beliefs than the pundits and politicians who, in the early months of 2011, predicted that an Arab spring was just around the corner. But finding a fuller account of Islam can be challenging for Christians because many authoritative Church sources are brief and incomplete. Take the Catechism of the Catholic Church, for example. Its statement about Muslims (it says nothing of Islam per se) is forty-four words in length, which is about eighty words less than the warning label on a bottle of Tylenol, and it contains no warnings, only the comforting assurance that 'together with us they adore the one, merciful God.' Well, yes, the Koran refers to God as "merciful," but Islam seems to have its own unique understanding of that word. For example, textbooks for tenth graders in Saudi Arabia instruct them on how to cut off the hand and foot of a thief (illustrations included) as prescribed in the Koran (5:33, 5:38). It would be nice to think that this is only for the purpose of giving students a feel for the way things were done in Muhammad's day; but as a matter of fact, amputations (along with beheadings) are conducted on a weekly basis in public squares in Saudi Arabia. When the Saudis apply a procrustean solution to the misfits in their society, they do so in the literal sense of the term.

An excessive emphasis on tolerance and sensitivity has resulted in a dangerous knowledge gap for Christians. Moreover, when Christians put tolerance above justice, they harm not only themselves, but Muslims as well. Christians need to ask whether the current conciliatory approach to Islam is just toward all those Muslims who suffer under the barbarities of sharia law. As has often been noted, the main victims of Islam are Muslims. Should Christians be more worried about offending the sensibilities of some Muslims, or should they be concerned about the men, women, and children who are oppressed by Islamic laws? Tolerance is fine up to a point, but as Thomas Mann observed, 'Tolerance becomes a crime when applied to evil.'

One thing seems clear. It is well past time for Christians to throw off their complacency and begin instead to think more deeply about what Islam is and what is at stake if we allow it to take root in our societies. And if Christians need to readjust their thinking, so too do Muslims. It is ironic that our society, which believes so strongly in change, nevertheless insists on the unchangeability of other people's beliefs. It is one of the legacies of multiculturalism that we have come to believe that our own culture is infinitely malleable, while believing that non-Western cultures are immutable. Because we think Muslim beliefs can never be changed, we never suggest that they ought to be changed.

It seems time to chart a different course. Any adequate response to the threat from Islam will require us to push Muslims to rethink their faith on the most basic level. In this regard, critics of Islam tend to avoid the main question in favor of secondary questions. The secondary questions are: Is Islam a religion of peace? Is Islam compatible with modern values? Are women treated fairly under sharia law? The main question is: Did Muhammad actually receive a revelation from God? That is really the heart of the matter. As long as Muslims believe that Muhammad received his marching orders from God, the Islamic jihad will continue. But take away the divine mandate to subjugate everyone, and you take away the rationale for Islam's war against the world.

Because the driving force behind Islamic aggression is Islamic theology, we can no longer afford to treat Islamic theology as a protected species. Paradoxically, the best way to secure peace and, at the same time, to show our love for Muslims is to instill doubts about Islam in the minds of Muslims. At the same time, of course, we must make sure that we have something better to offer in its place....