Two hundred and fifty-five child predators were arrested and 61 victims of child sexual exploitation identified during a five-week operation conducted by U.S. Immigration and Customs Enforcement's (ICE) Homeland Security Investigations (HSI) and Internet Crimes Against Children (ICAC) task forces across the United States and its territories.

Operation iGuardian, which ran May 28 to June 30, was a surge operation conducted as part of HSI's Operation Predator to identify and rescue victims of online sexual exploitation, and to arrest their abusers as well as others who own, trade and produce images of child pornography.

'Protecting our youth in the digital age requires all of us to be on the lookout for child predators abusing and extorting victims online,' said ICE Director John Morton. 'Children and parents need to understand that not everyone online is who they say they are. Child abusers prowl social media looking for opportunities to force young people into sexual exploitation through guile, deceit, and extortion. We want children to know that it's wrong for any adult to solicit or pressure them for sex and that the law is on their side.'

According to investigators, a 'disturbing trend' is emerging in which child predators are increasingly using the Internet to entice children to produce and share sexually explicit material online. During Operation iGuardian, HSI and ICAC investigators encountered various child predators chatting online with minors about sexual topics, sending them obscene images, encouraging them to produce nude or sexual photos and videos, and attempting to meet them in person to engage in sexual activity. In some cases, child predators are also sexually extorting, or 'sextorting,' the minors into producing additional and increasingly graphic images and videos....

From a recent issue of The Wanderer (reprinted with permission):

By PAUL LIKOUDIS
During the years when reports of clerical sexual abuse were crossing the desk of the former archbishop of Milwaukee, Rembert Weakland, OSB – who resigned his post after revelations of his own homosexual predations and a payoff were publicly exposed in May 2002 – was pushing explicit sex education and pro-homosexual programs in his archdiocese.

One of the striking revelations in the 6,000 pages of documentation released July 1 by Milwaukee Archbishop Jerome Listecki is that the majority of complaints against offending priests – both current and those of a historical nature dating back decades – landed on Archbishop Weakland's desk between 1979 and 1990.

Indeed, 29 of the 42 complaints of sexual abuse by archdiocesan priests that led to the archdiocese filing for bankruptcy in federal court were reported to Weakland in that period.

The first such report to reach Weakland, in April 1979, concerned Fr. William Effinger, from the father of a minor male who accused Effinger of molesting his son. Later, in the "summer of 1979," Weakland recounted in his autobiography, A Pilgrim in a Pilgrim Church, he "had accepted my homosexual orientation," and begun his infatuation with Paul Marcoux, which led to Marcoux's charge of "date rape" and a $450,000 settlement, paid by the archdiocese. 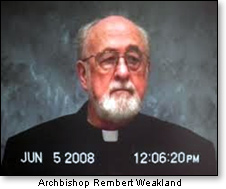 Consider also the case of Fr. James Arimond. According to the narrative provided by the archdiocese, in 1989, Arimond "was accused of sexual abuse of a minor. The report came in the form of a criminal complaint, the complaint said the abuse of a 16-year-old took place in the summer of 1988, but was not reported until 1989. Upon notice of the criminal complaint, archdiocesan officials placed Arimond on administrative leave in January 1990 pending an investigation into the allegation.

"He pleaded no contest to a charge of fourth-degree sexual assault and was released without bond after making the plea in July 1990, in Milwaukee County Circuit Court. He was sentenced by Circuit Judge Thomas Doherty to 18 months of probation and 45 days in the House of Correction under the work-release program.

"The prosecutor who handled the case had recommended three years of probation and that Arimond's ministry be restricted to one that would not involve contact with youth. He was placed on leave by the archdiocese, restricted from the exercise of ministry, and assigned to clerical tasks at the archdiocesan central offices. He was laicized in 1996. . . .

In the same period when Arimond was abusing males, in May of 1987, members of Catholics United for the Faith in the Archdiocese of Milwaukee were writing letters to Archbishop Weakland objecting to Arimond's advocacy of homosexuality on television programs, in educational programs sponsored by the archdiocese, in newspaper interviews and in his published writings, and pleaded with Weakland to stop "the prohomosexual movement within the Catholic Church in the Milwaukee Archdiocese."

Arimond, Weakland's designated "chaplain to Dignity," the homosexual advocacy group, for example, stated on a television program, aired January 19, 1988, that the teachings of the "Church's hierarchy [on homosexuality] do not conform to reality."

On February 7, 1988, Tom Phillips, president of Catholics Serving the Lord, sent a 28- page letter to Archbishop Weakland documenting the promotion of homosexuality in the archdiocese by Weakland, Fr. Arimond, and Capuchin Brother Ben Johnson through Catholic school sex education programs, archdiocesan workshops, and other fora. Weakland responded with a one- page letter that questioned Phillips' "sincerity," and continued: "I do not intend to comment on all the specifics that your letter raises, as I am in the middle of dealing with so many of them and so much of your information is outdated or one-sided. Also, many of the points you raise involve other institutions or religious orders and I prefer to work with them directly rather than through you or the press.

"I would advise, you, however, to be very cautious about some of the assertions you make, especially with regard to anyone who may have AIDS [two archdiocesan priests were recently in the news, one for dying of AIDS, the other having contracted the disease], as any incorrect information could be libelous.

"Might I remind you, too," Weakland added in his typical smarmy fashion, "that any use of the word Catholic in the title of an organization needs the permission of the Bishop; otherwise it is contrary to the Code of Canon Law."

In a March 3, 1988 Milwaukee Journal interview with Marie Rohde, Weakland accused Phillips and other orthodox Catholics of wasting energy in "witch-hunts through an obsession with sexual issues."

In this same period, through the early to mid-late 1980s, Weakland, certainly one of the most high profile U.S. bishops, was waging a public battle with the Holy See, especially Pope John Paul II.

Examples: In July and November 1986, two complaints reached Weakland on two priests, James Flynt and George Neudling. Flynt, ordained by Weakland in 1985, was accused of various offenses. Neudling, ordained in 1948, was reported to have abused several pre-pubertal males some 30 years earlier.

That same summer, Catholics in the archdiocese were objecting to Weakland imposing the New Creation sex education series on the children in Catholic schools. New Creation had been described by Edouard Cardinal Gagnon (he died in 2007), president of the Pontifical Council for the Family, as a "travesty of sex education," and complained that, "despite repeated warnings by the Holy See, both the editors and teachers continue to use and spread this series."

Weakland countered to one parent who objected to the program, "I believe it is in line with the guidelines presented by the Congregation for Education."

A September 17, 1987 Milwaukee Sentinel report by Mary Beth Murphy was headlined, "'Authoritarian Style' of Church Mostly Ignored, Weakland Says." Following Pope John Paul II's visit to the United States earlier that month, in which he reminded the U.S. bishops that it is an error to believe that dissent from the Magisterium of the Church is compatible with being a "good Catholic," and is an obstacle to receiving Communion, Weakland complained that Pope John Paul II's "authoritarian style" was "counterproductive."

One month earlier, in August 1987, the archdiocese received the first reports of sex abuse by Fr. Ronald Bandle.

On May 28, 1987, Fr. Bruce Brentrup, former principal of Mother of Good Counsel School, filed a lawsuit against Weakland and the Archdiocese of Milwaukee, asserting he was fired because he did not approve of the homosexual lifestyle. Three other former faculty members filed a similar lawsuit, alleging they were fired for reporting that a priest at the parish, Fr. Dennis Pecore, was sexually abusing minors.

In July 1987, Pecore was found guilty of sexual assault of a 14-year-old male, and sentenced to a year in prison.

In December 1988, Wisconsin Circuit Court Judge Janine Geske ruled against Brentrup and the other plaintiffs and in favor of the archdiocese.

In July 1988, complaints against two priests for sexually abusing minors, Fr. David Hanser and Fr. Daniel Massie, were made to Milwaukee Auxiliary Bishop Richard Sklba, who, one would suspect, reported the cases to Weakland.

Ironically, Weakland had created an uproar in Milwaukee and across the country when, in his May 26, 1988 "Herald of Hope" column in the archdiocesan newspaper, he asserted that not all victims of clerical sex abuse are "'innocent'; some, can be sexually very active and often quite streetwise."

Responding to Weakland's column, Milwaukee County Criminal Court Judge John F. Foley, a Catholic, observed: "To cast any blame whatsoever upon the child is an unfounded rationalization and nothing more than the same trite excuse that has from time immemorial been utilized by sex offenders to justify their illicit conduct."

In November 1990, Weakland was, again, the center of an international media frenzy when Pio Cardinal Laghi, former papal nuncio to the United States and then president of the Congregation for Education, barred the University of Fribourg from conferring an honorary doctorate on Weakland, ostensibly because of his stated views on abortion.

Weakland's earlier defense of the so-called "pro-choice" view generated national headlines, a call by The Wanderer for his removal, and a rebuke by the late John Cardinal O'Connor of New York.

In December 1990, Weakland was informed of abuse allegations against Fr. Eldred Lesniewski, ordained in 1953, by a man who claimed the priest abused him, starting at age 10, while he was resident at St. Joseph's Orphanage.

Over the following decade, through the "wreckovation" of St. John's Cathedral in July 2001, in direct defiance of the Holy See not to harm the architectural integrity of the cathedral, Archbishop Weakland abused the Catholic people of the archdiocese with his insolence, his toleration and promotion of theological dissent, liturgical abuses, and explicit sex education.

For that, unfortunately, there has been no apology, from him or from his successors, and that is long overdue.