July 20, 2013
Below is a brief interview with broadcast journalist and filmmaker-turned-Catholic priest John Clote, OFM, Conv.

Friar John – affectionately referred to as "Friar Purgatory" by Catholic author Susan Tassone – works with Lightbridge film production, a ministry of the Conventual Franciscan Friars of Saint Bonaventure Province in Chicago. He's the writer and director of the soon-to-be-released documentary film Purgatory: The Forgotten Church.

I recently had the opportunity to see Purgatory: The Forgotten Church, and it's quite good! The film begins by featuring the phenomena of near-death experiences from scientific as well as mystical viewpoints. It then goes into Catholic teaching on the afterlife. One of my favorite interviewees in the film – there are several, including [the late] Cardinal Francis George – is Father Doug Lorig, a convert from the Episcopal Church. Click here to read an interesting article about Father Lorig's experiences with purgatorial souls.

Regarding purgatory, the Catechism of the Catholic Church teaches (paragraphs 1472 and 1475):


To understand this doctrine and practice of the Church, it is necessary to understand that sin has a double consequence. Grave sin deprives us of communion with God and therefore makes us incapable of eternal life, the privation of which is called the 'eternal punishment' of sin. On the other hand every sin, even venial, entails an unhealthy attachment to creatures, which must be purified either here on earth, or after death in the state called Purgatory. This purification frees one from what is called the 'temporal punishment' of sin. These two punishments must not be conceived of as a kind of vengeance inflicted by God from without, but as following from the very nature of sin. A conversion which proceeds from a fervent charity can attain the complete purification of the sinner in such a way that no punishment would remain....

In the communion of saints, 'a perennial link of charity exists between the faithful who have already reached their heavenly home, those who are expiating their sins in purgatory and those who are still pilgrims on earth. Between them there is, too, an abundant exchange of all good things.' In this wonderful exchange, the holiness of one profits others, well beyond the harm that the sin of one could cause others. Thus recourse to the communion of saints lets the contrite sinner be more promptly and efficaciously purified of the punishments for sin.

1. I see you have a background in documentary filmmaking and broadcast journalism. Could you give my readers an overview of why you decided to pursue, and enter, the priesthood?

Friar John: "I decided to enter the priesthood ultimately because I felt genuinely called. But my call to the priesthood is a little different for two major reasons. First, it came later in life, after 20 years as a broadcast journalist and filmmaker; and secondly, I consider it a continuation of that first vocation. Grace builds upon nature. 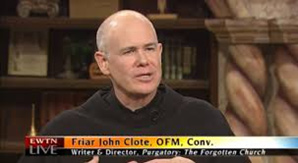 "As strange as it sounds, I understand my vocation of being a filmmaker as a preparation for my vocation to the sacramental priesthood. As a filmmaker sharing stories of faith through cinema, I'm able to administer the 'sacrament of story' to God's people. Stories, like the seven Catholic sacraments, have the unique power to transform our hearts. Stories have, like the sacraments, the power to make visible unseen realities. My experience tells me God has a reason for constructing my call in this way, although I do not completely understand it.

"Through my career in filmmaking, I was involved in making films about the lives of heroic priests in Church history – St. Maximilian Kolbe, Pope John Paul II, Blessed Seelos, Solanus Casey. I began to notice how God worked in transforming their ordinary lives and how these moments of transformation were so fruitful for them and others. So it's both this relational aspect of the Catholic priesthood and its transformative nature that appeals to me greatly."

2. What made you interested in doing a film on the subject of purgatory?

Friar John: "I was always considering doing a film about purgatory out of mere curiosity. But it was after my mother's death that I began to think about the topic more seriously. The subject matter hit more close to home. I had more questions. But it was a specific prayer experience that served as the catalyst for the film. The more I spoke to others, I realized how important it was for people to stay connected spiritually with their deceased loved ones. This connection seemed vital and essentially human. Purgatory has been misunderstood for a long time because of poor preaching and poor understanding. Over the centuries it has become distorted. I also was dismayed by the fact that so many priests were confused or ignorant of the Church's teaching. Consequently, today many Catholics are somewhat embarrassed by the doctrine of purgatory. So I wanted a film that would provide a clear understanding and explore what a beautiful expression of God's mercy Purgatory truly is. I think we have accomplished that task in this film."

3. What do you think it will take to get more Catholics interested in Church teaching on the afterlife?

Friar John: "First, watch this film. It's meant to educate, inspire, and ultimately create discussion, reflection, and prayer. Its purpose is ultimately evangelization. The Church's teaching is meant to bring us safely home into the heart of God. If we are open to listening to the wisdom of the Church, we realize that the Church's teaching on purgatory is an expression of divine mercy of the highest order. I think the viewer will be inspired to tap into the incredible spiritual power that exists in the communion of saints. If you begin to pray for those whom God inspires you to pray, you will inevitably become more deeply convinced of this powerful spiritual connection. The poor souls are called 'poor' because they can no longer pray for themselves. But we can. They are called 'holy' because they cannot sin anymore. Over time, these souls will reveal themselves to you in ways that will be very meaningful to you. Don't wait – and don't think you must know someone personally in order to pray for them. If you read the news and find someone who has died, simply say a prayer for that person. No prayer is ever wasted."

4. How do you think non-Catholics will benefit from viewing your film?

Friar John: "This film provides an historical, cultural and spiritual perspective on the afterlife. The film is meant for everyone. It's not just a Catholic film. It explains and illuminates Catholic teaching, but it's not categorically a Catholic film. This is intentional. That's why I began the film with an exploration of near-death experiences and with the question: 'Does human consciousness survive beyond bodily death?' If we start the conversation there, it casts a wide net in terms of the audience."