Given our media age of tweets, texts and tidbits, it's understandable.

What's frustrating to observe is the spin that often follows in the media. It's as if the Catholic faith has been reduced to whatever the pope's latest off-the-cuff remark happens to be.

But let's face it: That's just the way it is. It's not going to change anytime soon, whether it's Pope Francis or some future pope (assuming there's going to be a future pope, of course).

The media aren't particularly interested in quoting the Catechism of the Catholic Church, which does provide the authentic magisterial teachings. Yet even if they did, I wonder how many Catholics – or non-Catholics, for that matter – would give a darn? Probably a distinct minority.

Thus, when the dust settles from this latest papal encounter with the press, virtually everything will remain the same in the short run.

Catholic-friendly non-Catholics will remain non-Catholic, with many saying something to the effect of, "That Pope Francis sure seems like a nice and humble guy!"

Heterodox Catholics will continue to be heterodox.

Sedevacantists will continue to reject Vatican II and the Novus Ordo Mass, asserting that all post-Vatican II popes have been apostates and freemasons-in-disguise.

And orthodox Catholics will continue to hope and pray for the best, even throwing in a clean but corny joke or two (well, that's what I like to do, at least).

In the long run, it's hard to say what the effect of Pope Francis' pontificate will be. Perhaps he'll prove to be a holy genius who leads the Church into a new time of glory.

Then again, maybe not.

Maybe things will stay more or less the same.

Maybe things will get worse [shudder]. God only knows.

In the meantime, I'm very intrigued, even a bit perplexed, by the following allocution of Pope St. Pius X – one of the greatest popes in the history of the Church, no doubt – delivered in 1912, documented in the book The Pope, the Council, and the Mass, by James Likoudis and Kenneth D. Whitehead: 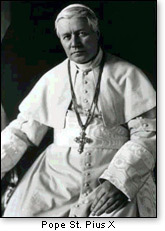 ...[W]hen we love the pope, we do not dispute whether he commands or requires a thing, or seek to know where the strict obligation of obedience lies, or in what matter we must obey; when we love the pope we do not say that he has not yet spoken clearly – as if he were required to speak his will in every man's ear, and to utter it not only by word of mouth but in letters and public documents as well. Nor do we cast doubt on his orders, alleging the pretext which comes easily to the man who does not want to obey, that it is not the pope who is commanding, but someone in his entourage. We do not limit the field in which he can and ought to exercise his authority; we do not oppose to the pope's authority that of other persons – no matter how learned – who differ from the pope. For whatever may be their learning, they are not holy, for where there is holiness there cannot be disagreement with the pope.